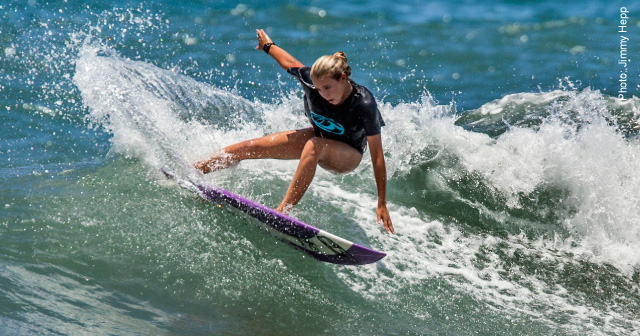 Born and raised in Lahiana, Summer Macedo has learned to appreciate the not-so-ideal waves of Maui. But this hasn’t stopped this ripper from chasing her dream. Learning to surf as a toddler, this pre teen entered the competitive world of surfing by the age of 7, making finals and taking home trophies from contests around the island. Maui is known to create a unique breed of surfers and Miss Macedo is among them, working toward qualifying for the Junior Pro contests and eventually, hopefully the Pro Tour.

With a couple “hidden” talents to boast of, Summer keeps her schedule busy. Currently sponsored by Honolua Surf Co. and Kazuma Surfboards, this 2013 Hawaii State Champion surfs mainly with her younger brother, Ocean, and trains in the water every day. Inspired by a couple important people, Summer’s passion for surfing is mingling with her growing aptitude… and it’s advancing at a rapid pace. Read more about this Maui surfer girl and find out why Freesurf has inducted Summer into this month’s slot for ‘She Rips’.

When did you start surfing and what do you remember about it?
“I started surfing when I was 2 years old. My dad and I would go tandem at Break Wall. I would cover my eyes when he lifted me up because I thought we were going to run into all the people! … “I started competitive surfing when I was 7, but I wasn’t going to neighbor islands (to compete) until last year,” she mentions.

What’s something most people don’t know about you?
“I really like to sing. And I love writing. I perform with my guitarist friend Shawn on special occasions… Like at school performances, graduations, May Day, and sometimes at my dad’s gallery… I used to act too. I performed and starred in two plays- ‘Alice in Wonderland’ as Alice and ‘Annie’ as the little girl Molly.” Summer performs cover songs of artists like Colbie Caillat, Adele, Alicia Keys and other contemporary pop and local Hawaiian style songs.

What do you want to achieve with your surfing?
“I want to get to a point where I’m surfing like a guy with power turns and advanced maneuvers that most girls aren’t doing. And I want to qualify for the Junior Pro contests and maybe the Hawaii Team. And eventually, my dream goal is to qualify for the Pro Tour.”

Do you have other life goals?
“I would like to make a music album and maybe when I’m old and retired I want to write a book.”

Who do you look up to and why?
“I look up to Carissa because I really admire her power turns and her style, and I really like her personality. She’s my main inspiration. My dad always inspires me to surf better too- he’s my coach… We surf everyday and he films us and then we watch them and he’ll coach us based on the movie.”

What are you working on?
“In the water I’m working on my power turns and blow tails, but I’m also focusing on perfecting the basics like cut backs, bottom turns, off the lips, wave selection… just trying to perfect that.”

What are you known for?
“I’m known for snaking my brother!” (laughing)… “People call me a go-getter because I don’t really like to sit in the line up and let all the guys take the waves; I’m kind of aggressive that way.”

Tell us about any cross training you do:
“I’m a yellow belt 4 stripes in Ju Jitsu. And my brother and I swim in the pool in the neighborhood a lot. And we RipStik and I also do yoga. RipStik helps me a lot because it copies surfing, a lot of carving and swiveling- it’s fun. Jui Jitsu helps me with confidence. Yoga I’m just starting so I’m just doing stretching and the basic stuff to get me looser and flexible… “I also go to Canada for snowboarding every year, except for last year because we went to NSSA Regionals.”

Last words for the Freesurf audience:
“Being born and raised in Hawaii is pretty special and so I give thanks that we live in such a beautiful place with such great waves; we have to enjoy it and protect it.”