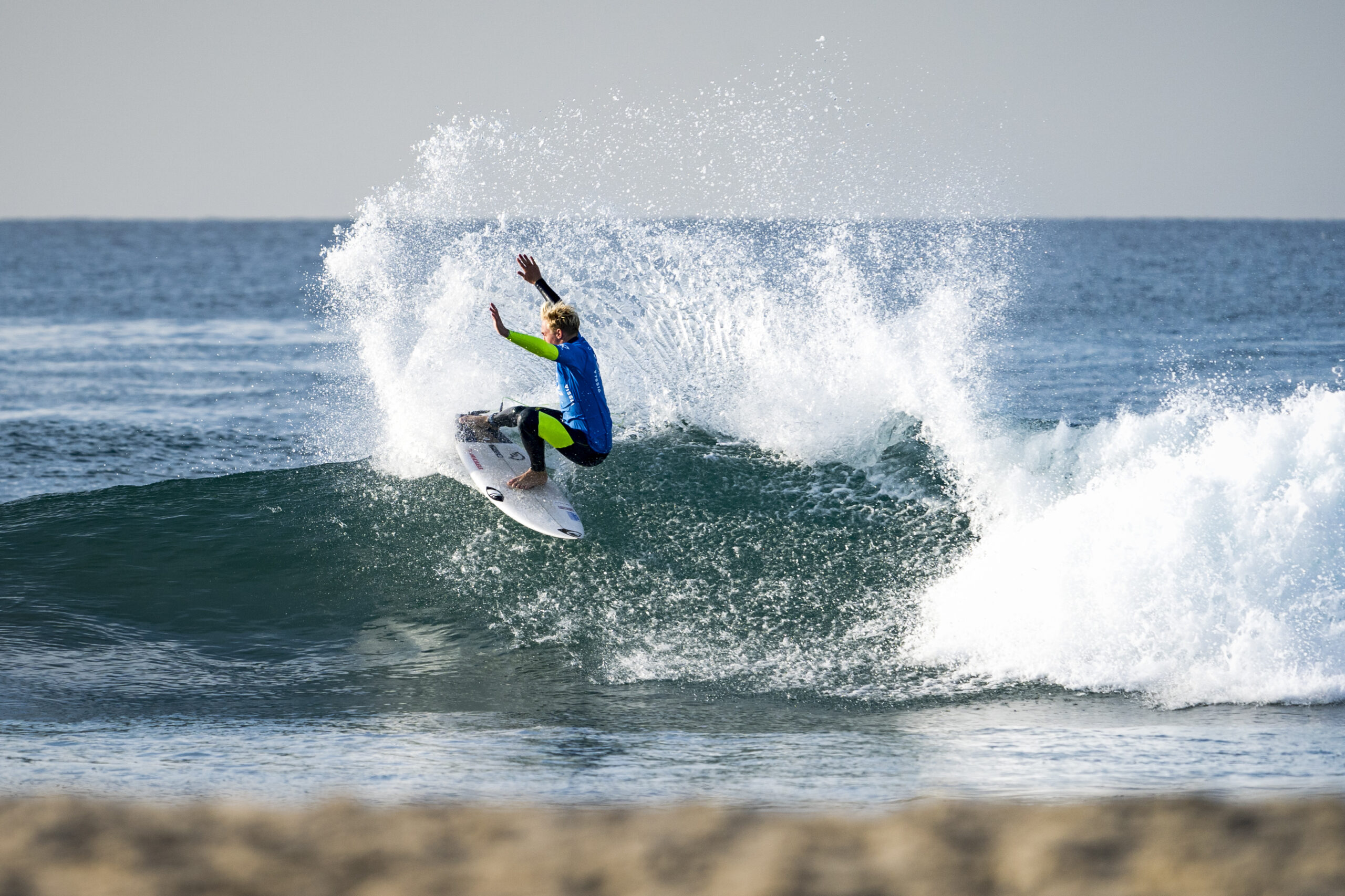 The third day of competition at the 2019 VISSLA ISA World Junior Surfing Championship presented by Visit Huntington Beach eliminated the first batch of competitors in the Repechage Rounds.

A total of twenty-four surfers out of 342 competitors bowed out of the event after losing for their second time in the competition. Due to the unique team spirit of ISA events, these surfers still have a job to support their compatriots in their heats.

Day three of competition kicked off with continued swell in the waist to chest high range. Variable winds led to windows of good conditions, with more challenging conditions prevailing in the afternoon. Main Event and Repechage heats ran across the dual podium format.

Japan’s Monnojo Yahagi made a strong impact for the defending Gold Medalist Team Japan. In his ISA debut, Yahagi completed an impressive aerial maneuver to lock in the highest heat total of the day with 15.87 in the Boys U-16 Division.

Team New Zealand’s U-18 Girls made impressive rebounds in the Repechage Rounds. Saffi Vette finished with the highest heat total of the division (13.50) and teammate Estella Hungerford (11.60) followed with the second highest.

Peru’s Sol Aguirre found her groove in the Repechage Rounds as well after a lackluster performance in the Main Event. She earned the highest heat total for Girls U-16 with 14.16 points.

Poland’s Maksymilian Michalewski shined in the Boys U-18 Repehchage, advancing in the event with the division high total of 11.64.

South Africa’s Luke Thompson made it through his Round 2 Main Event heat in the Boys U-16 division, having already fulfilled his dream of representing his country in the event.

“I came here last year for the first time and it was the best trip of my life,” said Thompson. “I stayed with the team, surfed against the best in the word, and made it to Repechage Round 9. I just want to do a couple of heats better this year and see if I can win Gold.

“I am super proud to represent South Africa, but it can be a lot of pressure representing a whole nation. Regardless, it’s amazing to have this opportunity.”

As the fierce Repechage heats simultaneously played out on the adjacent south podium, Morocco’s Lamiri Alaoui Ranya advanced through her Girls U-18 heat and spoke about the unique Repechage format, as well as her pride to surf for her country.

“It’s great to have another chance to compete in the Repechage Rounds. It’s a new opportunity to show what you are able to do and, if you are lucky, you can continue to fight and try to keep advancing.

“It’s an honor to represent Morocco, especially to be part of the development of women’s surfing in my country.”

American Samoa’s Liam Wilson advanced through his Repechage heat in the Boys U-18, keeping his dreams of a Gold Medal alive. Wilson is representing American Samoa for the first time in the event, after making his country’s ISA debut in the 2019 ISA World Surfing Games in Miyazaki, Japan last month.

“The VISSLA ISA World Juniors are definitely some of my fondest memories,” said February. “It’s great for these kids as they begin their surfing careers. They get to travel to a rad destination with their closest friends and see the rest of the world.

“You hear about all the big names from Australia, America, etcetera, but you come here and see everyone from all over the world in the same place.

“Surfing’s inclusion in the Olympics is awesome. I’ve seen it come full circle from competing in the ISA Juniors, the World Surfing Games, and now seeing the sport included in the Olympics.

“My advice to these young surfers would be to soak it all in and enjoy it for what it is. This is the most fun you will ever have.”

“It’s never easy to eliminate surfers from the event, but the truth is that qualifying for their national teams and representing a country is already a huge accomplishment for all of these surfers. The ISA spirit is alive and well even with surfers who are eliminated. It’s about working as a team and supporting one another. That said, today we began to narrow the field and work our way towards crowning the World Champions.”

The official Surfline forecast is calling a reinforcing south swell to mix in with a peaking northwest swell on Wednesday. Offshore winds are expected throughout the day, which should create excellent conditions for the world’s best U-18 surfers.

The remaining event schedule is as follows*:

October 30 – November 3 – Competition on the south side of Huntington Beach Pier, 7am – 5pm
November 3 – Closing Ceremony at Pier Plaza following the close of competition