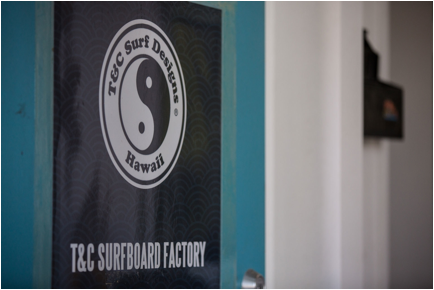 From a Shuttered Barbershop to a Global Brand: T&C Surf Hawaii Embodies the Spirit of the Island

This week, T&C Surf Hawaii and over 40 years of Hawaiian surfboard crafting represent the Aloha State on AOL’s This Built America editorial series.

Lifelong surf enthusiast Craig Sugihara has crafted surfboards under his T&C Surf Hawaii brand for 43 years. At 23, Sugihara produced his first surfboard from an aging board his neighbor had given up on. “I’ve always liked working with my hands,” the now 68-year-old explains. After three years of learning the ins and outs of crafting the ideal board, Sugihara launched T&C. in a shuttered barbershop. Now it’s a global brand.

Other long-time colleagues and soul surfers Travis Hashimoto and Glenn Pang—as well as dedicated family and coworkers—join Sugihara at T&C Surf Hawaii. Its boards can be spotted on the famed North Shore, as well as other legendary surf spots in Australia and South Africa. “That’s the greatest joy when someone comes back and tells you your board works really good and you did a great job” says Sugihara.

To see more on Hawaii’s famed surf culture, visit http:///www.thisbuiltamerica.com/hawaii. Or, follow This Built America on Facebook,Twitter, Instagram and Google+.

T&C Surf Hawaii joins a national movement in This Built America that is devoted to supporting American companies and American-made products. AOL is proud to support the effort along with sponsor Ford Trucks. Through the year, the editorial and video teams will explore 50 states in 50 weeks to bring 50 stories of the people who are bringing back manufacturing to America. The platform is produced in coordination with Man Made Content.