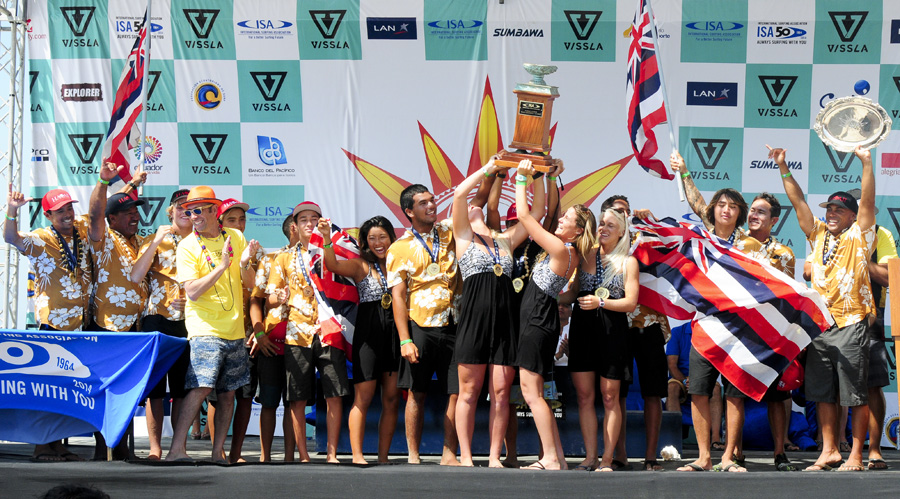 Following an incredible week of camaraderie and competition between the 32 National Teams, the Final Day of the VISSLA ISA World Junior Surfing Championship (WJSC) delivered great waves and exciting surfing performances. The VISSLA ISA WJSC officially closed after all the individual and team champions were crowned.>Hawaii is the new VISSLA ISA World Junior Surfing Championship Gold Medal Team and winner of the Team Champion Trophy.

“Thank you everybody for coming to Ecuador, and thank you to everyone in Salinas for receiving us with open arms,” commented ISA President Fernando Aguerre. “To all the competitors, congratulations, if you were here, you are a champion. At the end of the day there will be four individual Gold Medalists, but all of you are champions as members of your National Teams, the highest honor, which is surfing for your country and the love of your sport. Ecuador has a beautiful ocean that provides an endless source of waves and joy. We hope to be back with an ISA World Championship next year.

“I want to give a special thanks to the President of Ecuador Rafael Correa, the Ministries of Sport and Tourism, and a special recognition to our hosts, the Ecuadorean Surfing Federation (FES), and its President Xavier Aguirre, thank you very much for your excellent work in developing surfing in your country.”

The ocean came alive on the final day of competition, as predicted by Surfline, the official forecaster, as the swell arrived with powerful waves in the 6-8 feet range. The conditions provided great waves for the world’s best juniors to perform at their highest level.

The first final in the water was the Girls U-16, where Hawaii’s Mahina Maeda, posted 10.90, earning, for second year in a row, the Gold Medal and World Championship. Maeda battled the conditions from the incoming new swell, and had to wait for her last two waves to take the Gold Medal back to Hawaii.

“I feel so amazed right now. Honestly this is the biggest dream come true that I ever had,” said the ecstatic Hawaiian. “I stuck to the game plan and got one score under the belt and then worked to improve it. In the end, my last two waves improved my score so I was really happy about that. I wanted to win and I won, that was my overall goal, to get two Golds.”

Up next was the Boys U-16 Grand Final. France’s Leo-Paul Etienne won the Gold Medal, earning 12.44 points against Silver Medalist Joe Van Dijk (11.86) from Australia. The Bronze went to Nolan Rapoza (11.57) from USA and the Copper to Griffin Colapinto (6.93) also from USA.

Hawaii’s Tatiana Weston-Webb once again demonstrated her strong skills to take the Gold Medal for Hawaii. The 2014 ISA WJSC Gold Medalist, Weston-Webb, posted the highest total heat score of the entire event in both the Boys and Girls divisions, scoring an impressive 18.16, and also the highest single wave score of 9.83 in the Girls Division during the Grand Final.

“I want to thank my family back at home and from all over the world, you are the best! And the family that I have here in Ecuador is unbelievable.

“I watched the waves from earlier heats and also I watched Mahina win, just like last year, so I got super pumped from that. The waves were on my front hand and I always have so much fun on those waves. I just want to thank the ISA for having such a great venue and put on such a spectacular event. I can’t wait to come here maybe as a coach or as a Hawaii Team Member, helping the young kids surf. I just can’t be thankful enough.”

“I thank God and I don’t have words right now, I’m so excited. Brazil wins! Thanks to all my family and the Secretariat of the State of Santa Catarina, if it wasn’t for them and my family I wouldn’t be here.”

Lucca Mesinas, from Peru, won the Bronze Medal, finishing third with a 9.94 and Hawaii’s Imai DeVault won the Copper Medal placing fourth with a 9.50.

When the surfing competition concluded, the Closing Ceremony took place to recognize all ISA Scholarship winners present at this event and officially close the 2014 VISSLA ISA World Junior Surfing Championship. Nine ISA Scholarship recipients were called to the stage to receive a certificate from the ISA President. Many of these surfers were able to qualify for their National Teams with the help of the ISA Scholarship as well as continue their education. After that inspiring ceremony, all the individual and team medals were awarded to the winners.

For a full list of results visit: http://isawjsc.com/results/
For the full event coverage with daily videos and photo galleries visit- http://www.isawjsc.com/