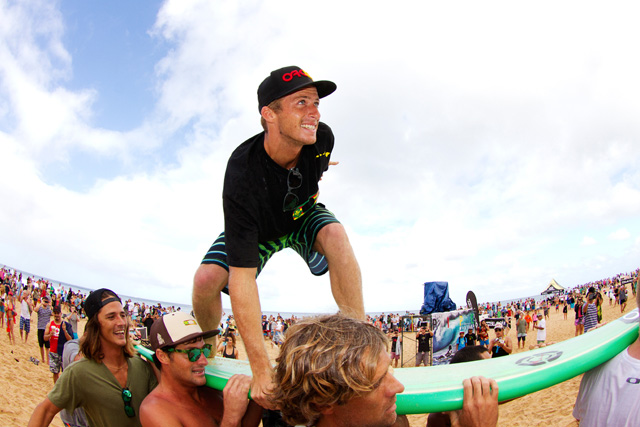 Kauai’s Sebastian Zietz (HAW), 24, has won the 2012 Vans Triple Crown Title of Surfing and is through to the quarter finals of the Billabong Pipe Masters In Memory of Andy Irons. The event was held in pumping six-to-eight foot surf and Zietz was in flawless form, eliminating defending Vans Triple Crown champion John John Florence (HAW) in Round 3. Zietz wins a record $100,000 bonus in recognition of the 30th anniversary of the Series, hydrated by vitaminwater, as well as a $30,000 Harley Davidson and a $10,000 custom Nixon watch.

“I kind of wasn’t ready for it,” Zietz said. “John John (Florence) is my favorite surfer at the moment. He missed that first one and I got priority from him. He was looking at Backdoor, so I knew it must have been good. I saw him fall on that last one and it was lucky for me and unlucky for John. I’m still focused on the contest, this all hasn’t really sunk in yet and I’ll celebrate everything after it’s over. But beating John John I feel like I can beat anyone.”

Zietz would go onto claim the opening Round 4 bout over Damien Hobgood (USA), 33, and Dane Reynolds (USA), 27, advancing directly into the quarters.

Kelly Slater (USA), 40, current ASP WCT No. 2, was methodical in his Round 3 heat, navigating both Pipeline and Backdoor with precision for a commanding win over wildcard Billy Kemper (HAW). Slater earned the day’s highest heat total, an 18.63 out of 20, for his efforts.

“It drives you nuts when you’re in the event and the waves are so good on the opening day,” Slater said. “Backdoor got a little better today because the swell got a little more North, but last night was A-plus Pipe and everyone knew about it. There are really good waves out there. We were scrapping to get anything going and I just got in synch. Billy (Kemper) and I were scrapping for sure and he let me know he wanted to win that heat as bad as I did.”

Slater, who is currently in contention for an unprecedented 12th ASP World Title, stressed the importance of focusing on each heat at the Billabong Pipe Masters rather than the distractions that come along with the ASP World Title Race.

“We’ve had enough time to think about it,” Slater said. “We’re all processing it in our different ways. Mick (Fanning) is probably the most relaxed because he’s a long shot. He knows what he has to do, he needs to win heats, whereas if I make it through the next heat then Parko (Joel Parkinson) has to beat me, but Joel and I aren’t going to come up against each other unless we’re in the Final. If you’re thinking about that during your heat, you’re not thinking about what’s going on in the water. You have to be clear minded from all of that stuff.”

“It’s good to get in the water and start the game,” Parkinson said. “It was torture watching yesterday, but it’s a nervous frustration. You’ve got to scramble at the start and stay patient at the end. I tried to get a couple of early ones and then wait. I got folded on a crazy left and then found that perfect drainer on the right. Backdoor can offer the best section to lay one over and it had the perfect part to lay one over. It felt so good to do that.”

Parkinson would go onto blitz his afternoon Round 4 bout, advancing directly to the Quarterfinals of the Billabong Pipe Masters. Slater will contest his Round 4 heat when competition recommences.

Mick Fanning (AUS), 31, who was in contention for the ASP World Title heading into the Billabong Pipe Masters, was eliminated from competition by wildcard Shane Dorian (HAW), 40, this afternoon, ending his chances of a 3rd ASP World Title at the Banzai Pipeline.

“Shane (Dorian) has been a hero of mine since I learned how to surf and I wanted to be in the water with him,” Fanning said. “We said we’d make it a fun one out there. We were going tit-for-tat and I was close on the last one but it got me at the end. I was relaxed going in to this event because it (the ASP World Title) was a long shot. There was no pressure on me and I wanted to give it my all and finish well. I had a good heat and threw everything I had at it.”

Reynolds, a wildcard into the event, posted the only perfect 10-point ride of the Billabong Pipe Masters so far, driving through a deep backdoor barrel en route to eliminating Adriano de Souza (BRA), 25 in Round 3. Reynolds’ perfect score came in his second heat victory of the day after besting Kai Otton (AUS), 32, in Round 2 in their morning match up.

“There weren’t any rights out there,” Reynolds said. “It just looks like the right swell and size for the rights but they weren’t coming in. On my right, it was crumbly and I was trying to get under the lip. It crumbled and I just got under the whitewash. I was deep and just pushed through it. It’s the first 10 I got out here. I’ve been competing a lot this year still. I don’t think there is a shifting of gears, you’re just trying to make due with what comes to you.”

After an impressive run this morning, Reynolds fell short against Zietz in his afternoon, non-elimination Round 4 heat and will take on C.J. Hobgood (USA), 33, in Round 5 when competition resumes.

Gabriel Medina (BRA), 18, led the Brazilian charge while getting the best of Kolohe Andino (USA), 18, in an incredible Round 3 rookie battle. Medina, who is often cited for his aerial game, looked comfortable in Pipeline’s heavy conditions and earned one of the event’s high-heat totals of 18.50 for two immaculate Pipeline bombs.

“It felt so good to get two waves at Pipe,” Medina said. “I’ve been watching the wave since this morning and rode a 6’6″. I’m just stoked to make it through, I’m pretty happy. Where I come from is a barreling wave. I’ve surfed there all of my life and I think it helps me out here. I’ve heard people saying things about me not being able to surf on my backhand and that I can’t get barreled, and it’s good. I’ve been practicing and I think I’m getting better at it.”

Event organizers will reconvene tomorrow morning at 6:30am local time for a possible 8am recommencement to competition.

Surfline, official forecasters for the Billabong Pipe Masters, have called for: Solid NW swell from today will ease through early next week. Looking further out, a much smaller NW swell will move in Wed the 12th, with a larger WNW swell for Friday the 14th.