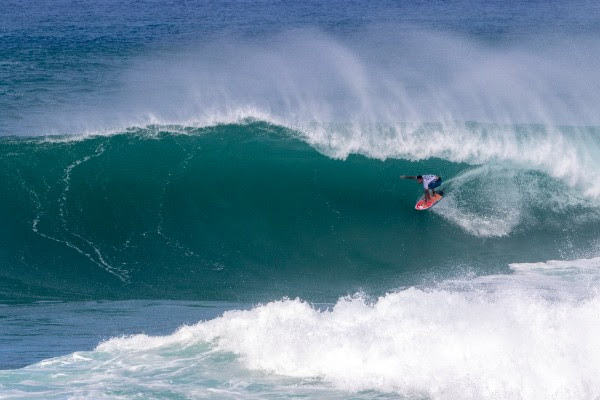 Haleiwa, Oahu/HAWAII — (Sunday, November 25, 2018) – Big Wave World Champion Billy Kemper (HAW) earned the first perfect 10-point ride of the 2018 Vans Triple Crown of Surfing today at the Vans World Cup of Surfing, after a rising swell produced solid surf for the opening day of competition. Wave face heights reached 20ft. by midday and will continue to build into tomorrow for XXL surf that will likely see wash-through sets at Sunset Beach and unmanageable conditions for athletes. This gives Kemper the opportunity to fly to Maui in anticipation of tomorrow’s Jaws Challenge at Pe‘ahi, which he won in 2015 and 2016.

The Vans World Cup is Stop No. 2 of the Vans Triple Crown of Surfing (VTCS) and the crowning glory of the World Surf League (WSL) Men’s 2018 Qualifying Series (QS) circuit. Highly-competitive and suspenseful, this event holds the biggest qualification implications of the year, but for big wave waterman Kemper, it represents a lifelong goal as one of the most storied waves in competitive surfing.

“This event out of all three of them, it just means so much,” said Kemper. “I’ve always looked up to Kahea Hart and Pancho (Sullivan) and Sunny (Garcia), I’ve always wanted to surf like them. My dream is to win this event. To kick off this marathon coming up ahead like that, I feel great, I’m really excited. This event means a lot. Just having fun, enjoying it.” 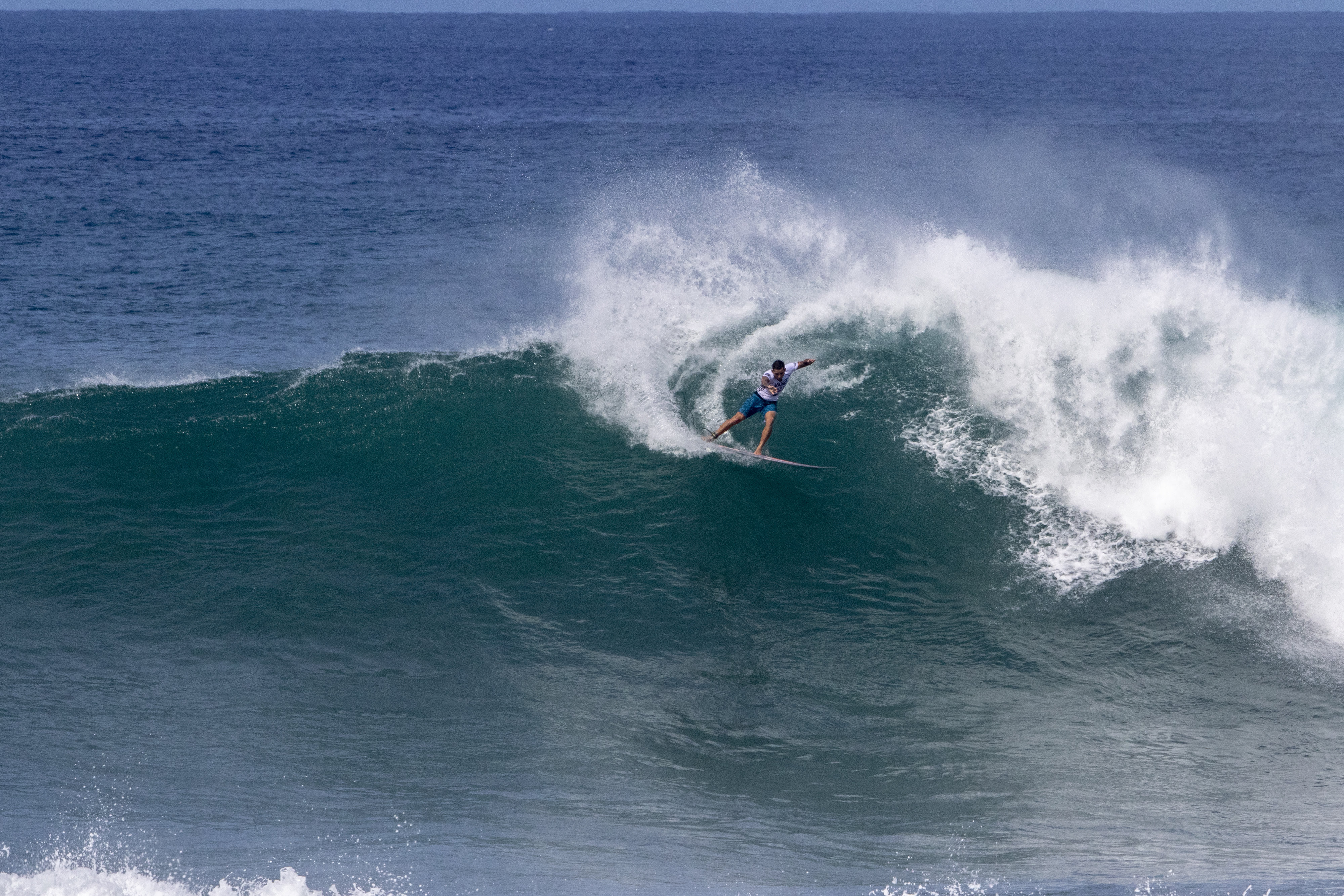 Kemper moved from Maui to the North Shore at the age of 8 and has been a regular standout at Sunset Beach since his rise into competitive surfing. Credit: © WSL / Keoki

Kemper leaped points ahead of competitors in Heat 9 after backing up his 7.17 with a deep, long barrel and critical carving turn that was a unanimous 10 across the scoreboard. His solid 12-ft. tube was the ride of the day and puts him in a strong mindset to tackle tomorrow’s monster-size surf at Pe‘ahi, despite a recent hip injury while surfing Teahupo‘o.

“I really wanted to put a good run in at the Triple Crown and I had a bad fall in Tahiti just about a month ago, I tore my labrum, my abductor in my hip,” Kemper said. He has been training seven days a week for four months straight and is laser focused on nutrition, heart health, mental training and physical fitness. Although the injury was a setback on his VTCS title chase, he is back in action this week for the big waves of Sunset Beach and Pe‘ahi.

“I take it pretty serious,” Kemper continued. “It’s exactly why I do that, for this reason right here. A lot of people are probably tripping out on what we have ahead of us, but for me this is exactly what I’ve been working for so I’m so excited. Just really get to put my body through a marathon of some hell waves. This is what it’s all about, I’m very excited.”

Local athletes dominated the top ten waves of the day with Big Island surfer Shayden Pacarro (HAW) coming in behind Kemper for the second highest single wave score, an 8.33. Pacarro had an impressive two-turn combination of maneuvers on a set wave, which included a huge top turn to hit the lip on the opening. 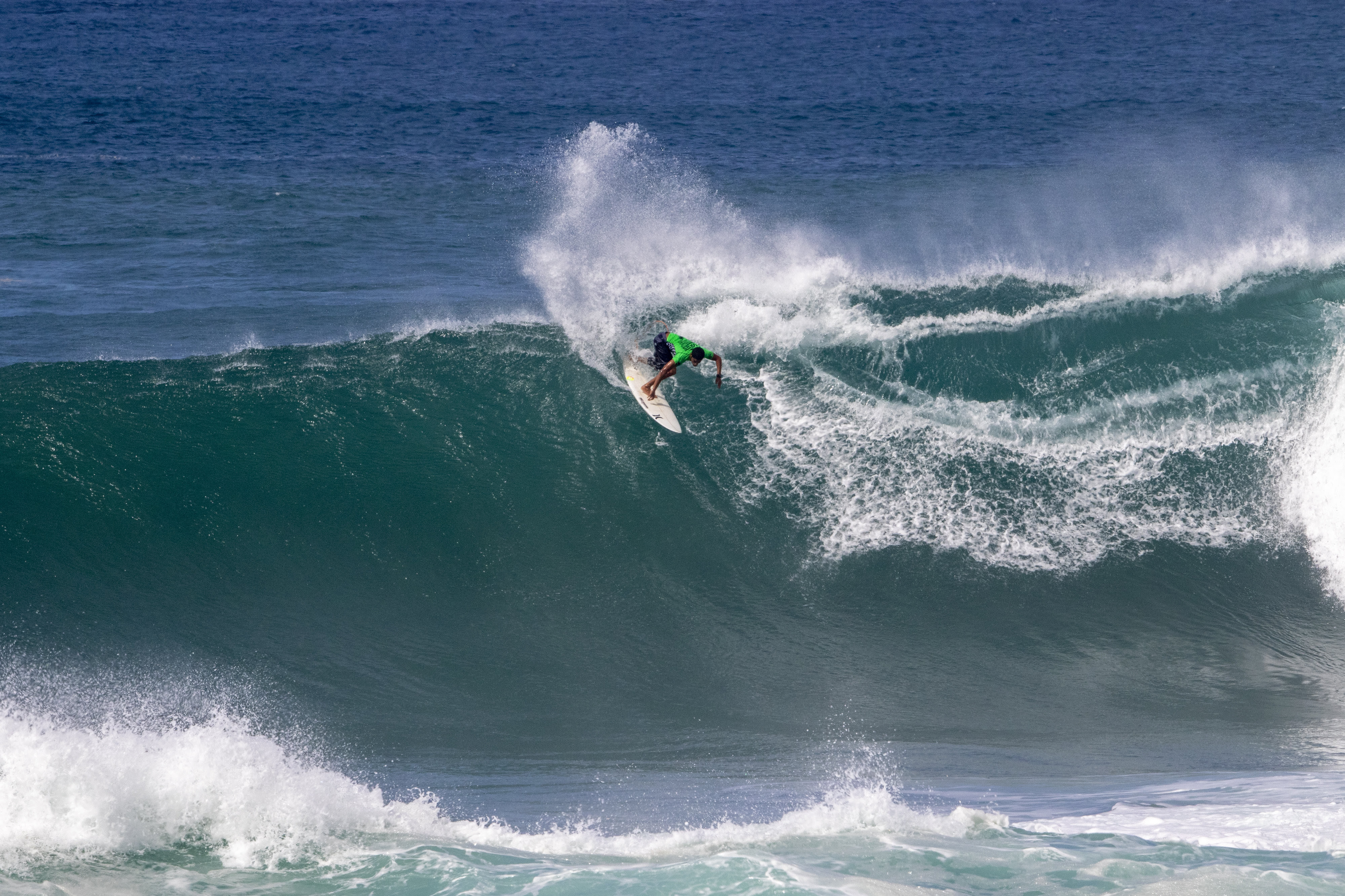 On his final ride of the heat, Pacarro nailed down the day’s second-best wave score and first place advancement into Round 2. Credit: © WSL / Keoki

“I was so stoked, the waves are perfect,” said Pacarro. “Just watching (Billy Kemper) thread that thing and come right out. Everybody in the channel, we were all psyching. Time was ticking and I was like, “Now it’s our turn!” So stoked to surf when the waves are going off.”

Commentators touted Mason Ho (HAW) as nailing the maneuver of the day for an upside-down closing section maneuver with commitment and innovation that can only come from a Sunset Beach local. The turn counted toward his overall 12.43 score line, meanwhile his best ride of the heat, a 6.83, was for a classic Sunset turn followed by a couple more powerful maneuvers. 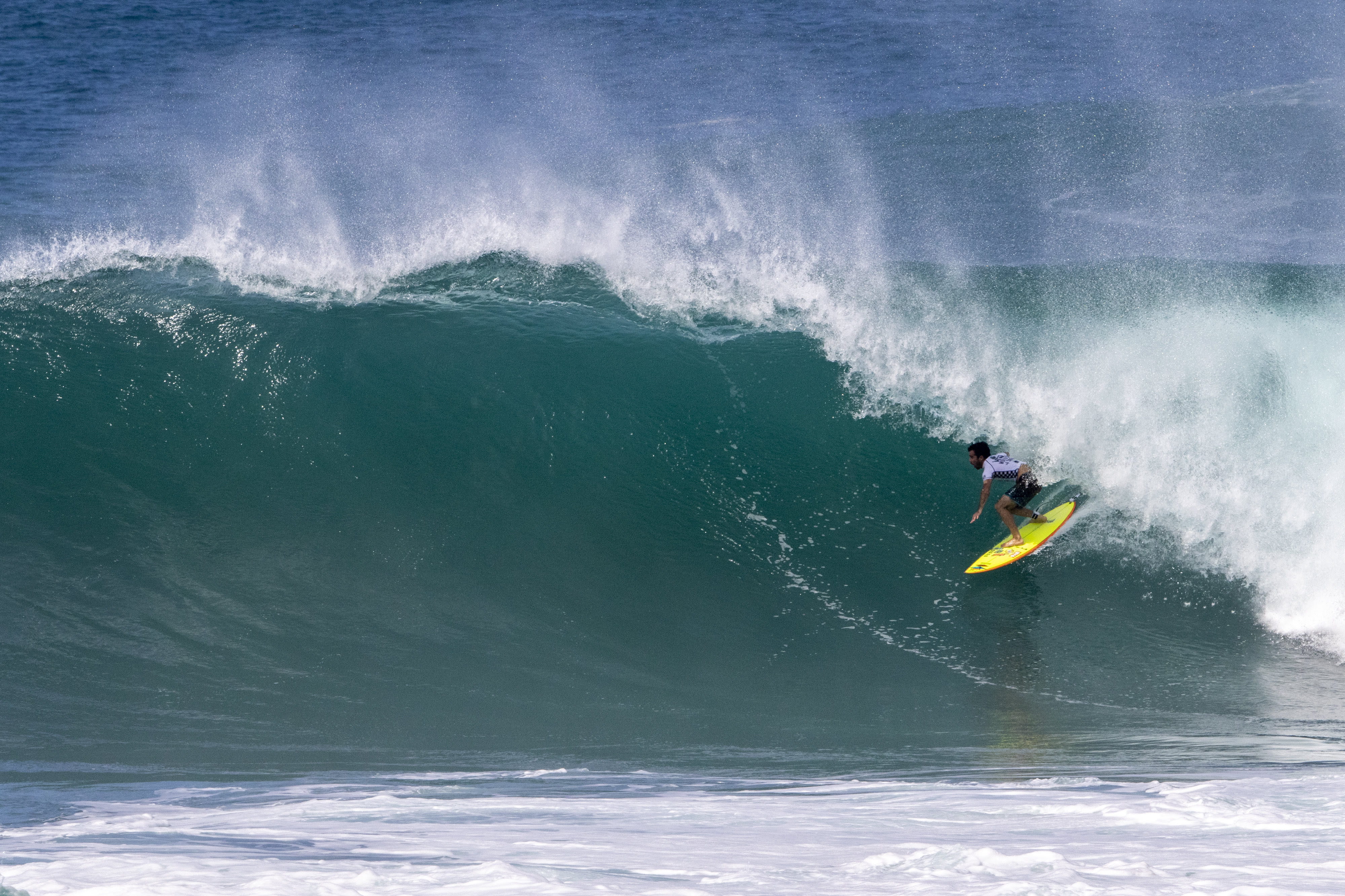 “I think I did a turn just right before and I was like, ‘Oh that felt kind of nice,’” Ho said. “I was kind of pumping, I could have done another one but my dad was like, ‘Don’t force anything today,’ so I skipped that one and all of a sudden I got a slam. I saw that one (final wave section) pop up and I felt like I should hit it, so I hit it.”

Kemper, Pacarro and Ho’s waves went into the day’s top ten best rides alongside California standout Skip McCullough (USA), who recorded an 8.17 for a cavernous barrel and a carve to close out the wave.

“We saw that thing from a mile away,” said McCullough. “It was coming in, it wasn’t even a double up, it was like a triple or quadruple up. I just kind of came off the bottom and said, ‘Oh I hope this thing barrels!’ because I hate stalling and then not getting barreled, but it had this nice gaping section down the line.” 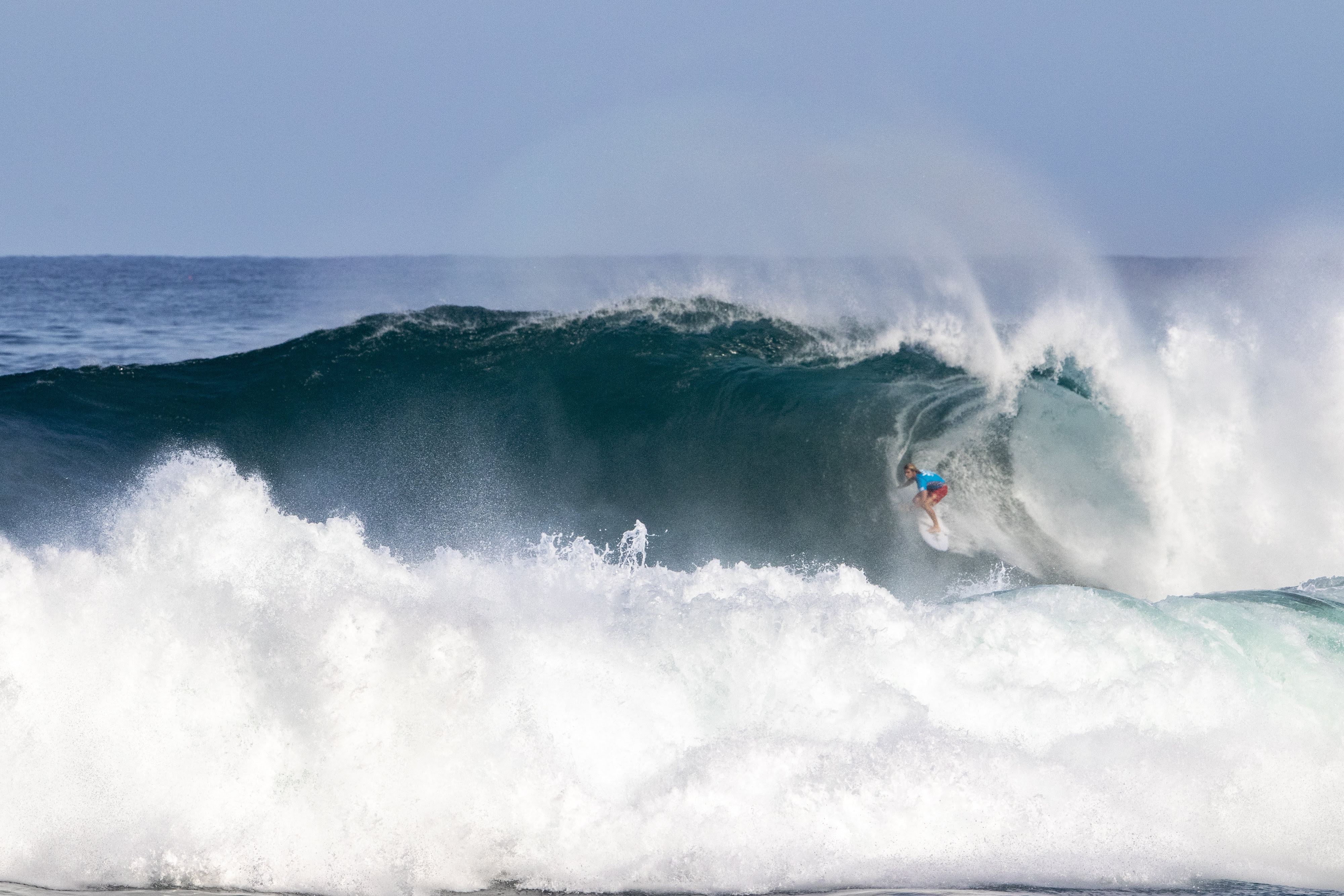 McCullough lines up for a beastly barrel in one of the earlier heats of the morning. Credit: © WSL / Keoki

With eight years under his belt on the QS, McCullough will see his best ranking result by far to close out 2018 — 81st as of today — with the opportunity to better this given a strong finish at Sunset Beach. The La Jolla local tasted victory in October at the Siargao Cloud 9 Surfing Cup in the Philippines as well as podium finishes in Chile and Indonesia.

Surfline, official forecaster for the VTCS, reports that the strong NW swell that filled in through the afternoon today will continue into Monday, although will be overtaken by a much larger and longer period NW swell that will build in and peak. All signs point to a major swell on Monday overloading and washing out Sunset.

The second event of the Vans Triple Crown of Surfing, the Vans World Cup of Surfing, has a holding window from November 25 – December 6 and will take place at Sunset Beach. For more information about the event, including past champions, spectator tips, community events and more, please visit http://www.vanstriplecrownofsurfing.com/.

Each event of the 2018 Vans Triple Crown of Surfing will run on the four best days of surf within the event’s holding window. LIVE streaming is available on WorldSurfLeague.com, VansTripleCrownOfSurfing.com, Facebook.com/wsllive and the WSL and Facebook apps (Facebook login required for mobile viewing). Or tune into Spectrum SURF Channel, which will televise the action LIVE and in replay on digital channels 20 and 1020HD, across the state of Hawaii.