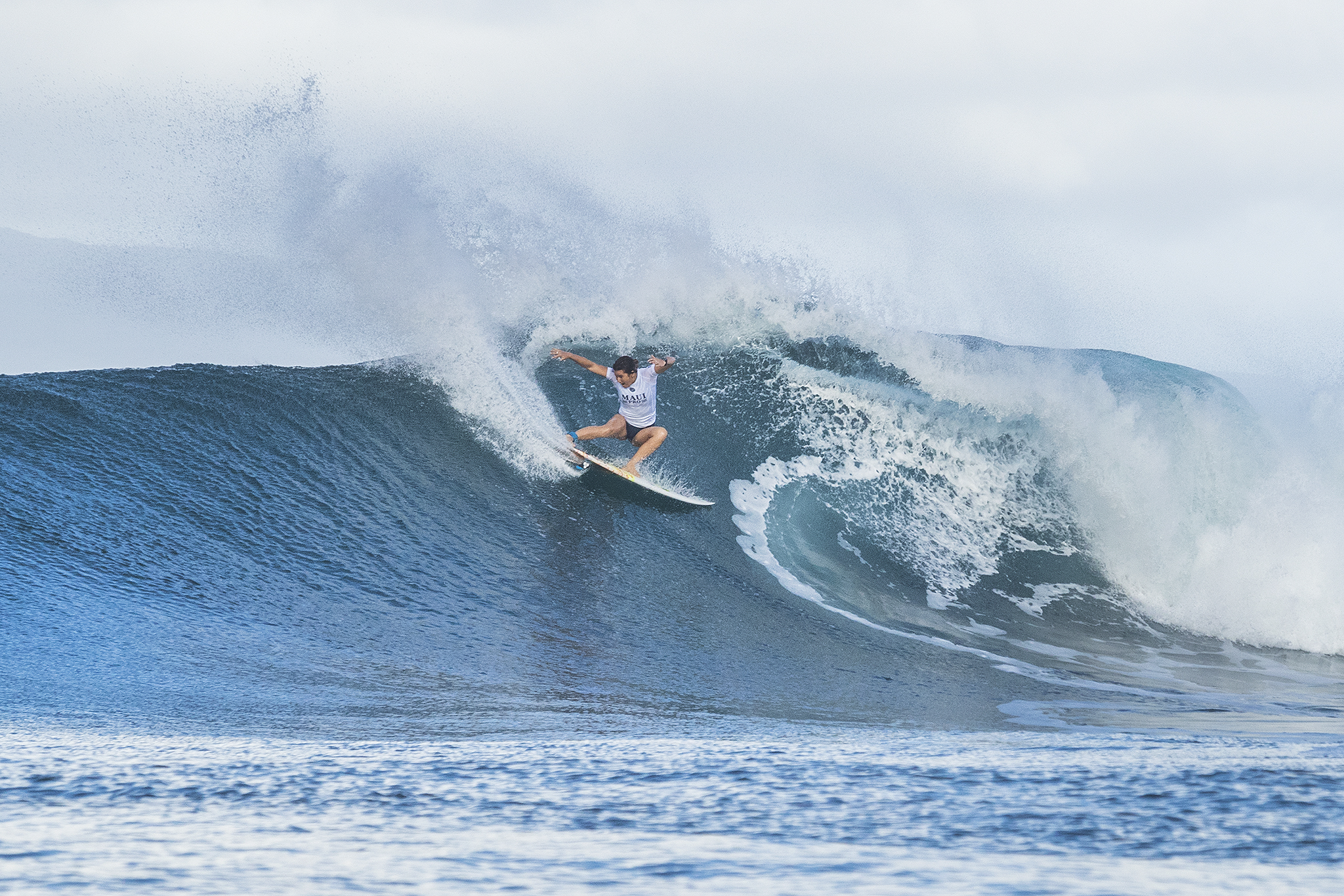 Wildcard Brisa Hennessy of Hawaii will surf in Round Two of the 2017 Maui Women's Pro after placing second in Heat 3 of Round One at Honolua Bay, Maui, Hawaii, USA today Wednesday November 30, 2017. PHOTO: © WSL / Cestari
News
·7 min read

The final event of the 2017 World Surf League (WSL) Championship Tour (CT), the Maui Women’s Pro, saw a dramatic day for the World Title race with big upsets to start Round 1. Honolua Bay delivered clean, four-to-six foot (1.5 – 2 metre) swell for the world’s best surfers to battle for the coveted 2017 World Title.
Sally Fitzgibbons’ (AUS) incredible 2017 run and hopes of clinching her first-ever WSL Title were dashed today by wildcard threat Brisa Hennessy (HAW). The 18-year-old, Oahu-native got off to a slow start as she showed her patience and pounced on the opportunity to lock in a solid score when the sets came through. Hennessy posted an excellent 8.50 (out of a possible 10) to take the lead from Fitzgibbons in the dying minutes of the heat and deliver a big upset. Honolua Bay went quiet for the final three minutes and did not give the current Jeep Leaderboard No. 1 a chance to strike back before the final horn sounded.
“Honestly I have no words,” Hennessy said. “I’m just extremely humbled. Sally [Fitzgibbons], I’ve looked up to her for so long and it was just an honor to surf against her. I think it was the wave, but it definitely feels really good just to get those numbers from this panel and I’m really happy. I want to be on the CT more than ever and I’m excited to give it all I have, and just to be here with my heroes, I’m just soaking in that.”
Fitzgibbons’ early exit sees her out of the title race, which is now in the hands of the four remaining contenders Tyler Wright (AUS), Courtney Conlogue (USA), Carissa Moore (HAW)and Stephanie Gilmore (AUS).
“It’s such a tough set of circumstances just sitting there at the end and in my head I had that vision you get in the movies where that wave comes,” Fitzgibbons said. “I really felt it was going to happen, but it didn’t. I committed everything. I did my best this year. I trained the hardest I could and prepared, and that’s just the situation I was given. I feel like I’ve got what it takes now to really just absorb that for what it is. I’m proud of myself and my team at the end of the day, and it was up to the ocean at the end, but it wasn’t my day.
“I was just proud to be an Aussie in the mix, and the others are surfing extremely well,” continued Fitzgibbons. “Whoever takes it out, they truly deserve it. Everyone was in the mix coming into this event and I knew it would be close. I really wanted to go all the way, but it’ll be on for next year, no doubt.”
Competition looks set to continue tomorrow with Finals Day and the event will decide the 2017 WSL Women’s Title, which represents the culmination of a year-long battle amongst the world’s best surfers to claim sport’s highest honor and join a list of the most revered individuals in all of surfing. Four surfers remain in contention to clinch the title: Tyler Wright (AUS), Courtney Conlogue (USA), Carissa Moore (HAW) and Stephanie Gilmore (AUS).

The World Title scenarios heading into Finals Day are as follows:

– Wright and Conlogue can each clinch the Title by winning the event;

– With Fitzgibbons out of the race Wright needs at 5th, Conlogue needs a 3rd, and Moore and Gilmore need to win the event to claim Title.
Defending WSL Champion Tyler Wright (AUS) kickstarted her Maui Women’s Pro campaign with Round 1 and Round 3 victories. Wright saved her top performance for a big Round 3 match-up against an in-form Silvana Lima (BRA), who earlier sent Fitzgibbons to Round 2, and Coco Ho (HAW). The current No. 2 found a dreamy Honolua Bay barrel that allowed her to come out and finish off the wave with her signature power maneuvers and post the day’s highest single-wave score of a near-perfect 9.87.
“That was one of those heats where every girl got barreled and that was really cool,” Wright said. “We all felt the ocean. I’m really happy with the way I’m surfing, and the heat plans we’ve been coming up with. The whole team is working really hard to make sure I’m on the point and on the right spots.”
Current World No. 5 and six-time WSL Champion Stephanie Gilmore (AUS) showcased her dominance with a near-perfect 9.57 in her Round 2 elimination heat over Laura Enever (AUS). Gilmore continued her world-class form in Round 3 with another pair of excellent scores, a 9.07 and 8.00, and will continue her hunt for a seventh World Title in the Quarterfinals when competition resumes.
“I’ll never forget winning my very first World Title here and I just could not believe that it finally happened. It was one of the greatest moments in my career so far,” Gilmore said. “That was heartbreaking to watch Sally [Fitzgibbons] go down and it was just one those things. I’ve been in that position before where I’ve lost chasing that World Title, and it still went my way in the end, but it’s like getting stabbed in the neck basically — it was really, really tough.
“With regards to the World Title, the pressure is mounting, but I feel like the pressure is on the other girls and I’m just kind of hanging on the edge at the back,” Gilmore continued. “If I can sneak up and do my thing, we’ll see what happens. I love the stress and seeing people crack, and I love seeing people shy. I think that’s what World Title races and the last event are all about — it’s pretty special to be here.”
Three-time WSL Champion Carissa Moore (HAW) advanced straight from Round 1 to Round 3,but was stopped in Round 3 by 2017 CT Rookie Bronte Macaulay (AUS). Falling just 1.10 points short of an early Quarterfinal berth, Moore will need to win her elimination Round 4 heat against Tatiana Weston-Webb (HAW) in order to keep her World Title hopes alive this season.
Malia Manuel (HAW) threw a wrench into current World No. 3 and World Title contender Courtney Conlogue’s (USA) campaign by sending the Californian to elimination Round 4. The beginning of the heat got off to dramatic start with Weston-Webb being issued a paddle interference on fellow Kauai surfer Manuel. Despite the tangle, Manuel wasn’t phased and struck first with a 7.17 to put early pressure on Conlogue. Earlier this year, Manuel overcame a devastating knee injury and did not return to competition until the European leg where she caught fire with a Semifinal and Quarterfinal result. The  24-year-old now find herself in the Quarterfinals once more.
“I went through a lot and learned from every step of the way, but I’m so happy to be in the Quarters here,” Manuel said. “I really have a different approach for this whole event and really just not having high expectations of myself just because of that entire amount of time I didn’t surf. I didn’t surf for four months so it was really tricky to not have high expectations, but just meditating and having fun in the freesurfs to work on the little things. That heat was funny though, Courtney [Conlogue] has a lot going on this week and Tatiana [Weston-Webb] is an awesome surfer, so I knew it was going to be a hard heat.”
Event organizers will convene tomorrow morning at 7:30 a.m. to assess conditions and make the next call.
Surfline, official forecaster for the Maui Women’s Pro, are calling for:

Still on track for some good size surf at Honolua Bay over the first several days of the event window. Saturday the 25th will see fading yet contestable leftovers of old North swell. Then a new shot of North swell will build in Sunday PM the 26th with overhead surf on Monday morning the 27th. After that, a pair of decent size NW swellsare looking to move in over the Nov 29th – Dec 1st with more head-overhead sets for Honolua. Strong ENE Trades are expected for at least the next several days.