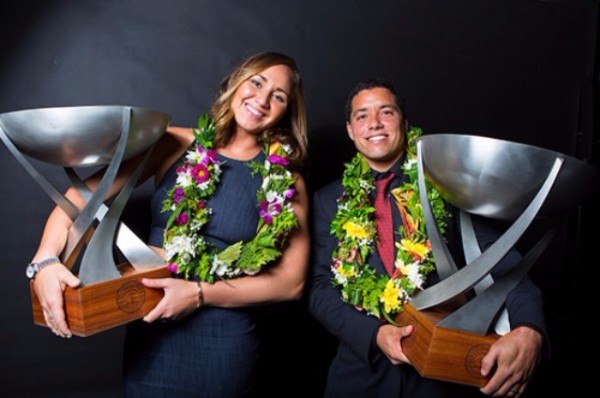 The world’s best surfers hit the red carpet for the 2016 World Surf League (WSL) Awards – the night that celebrates the achievements of the 2015 season, and officially opens the 2016 WSL Samsung Galaxy Championship Tour year.

Accolades and awards were delivered to those who have contributed to the sport, including the Heat of the Year, Breakthrough Performers and, of course, the WSL Champions.

“This past year was unforgettable in so many ways. More than the Title, the friendships and memories made meant the most,” Moore said during her acceptance speech. “2015 was incredible, but this year is going to be even better. Let’s dream big and work hard. Let’s be passionate and competitive, but most of all let’s have fun and enjoy each other.”

“It’s an incredible feeling and so special in dedication to my good friend Ricardo dos Santos,” de Souza said upon receiving the World Title. “I have this tattoo in memory of him — he had the same tattoo that said ‘Strength, Balance and Love,’ and that’s all I needed to win this World Title. This is all in dedication to my brother as well, who bought me my first surfboard for seven dollars and now I’m on top of the world. There’s no words to describe how I’m feeling right now.”

“I have to say thank you to my family,” said De Souza. “I know it is not easy to let your son follow his dream at 12 years old and let him travel around the world by himself. My family gave me the support to reach this dream, and I do believe this was a great demonstration of love.”

The 2016 Samsung Galaxy WSL Championship Tour will commence with the Quiksilver and Roxy Pro Gold Coast from March 10 – 21, 2016.