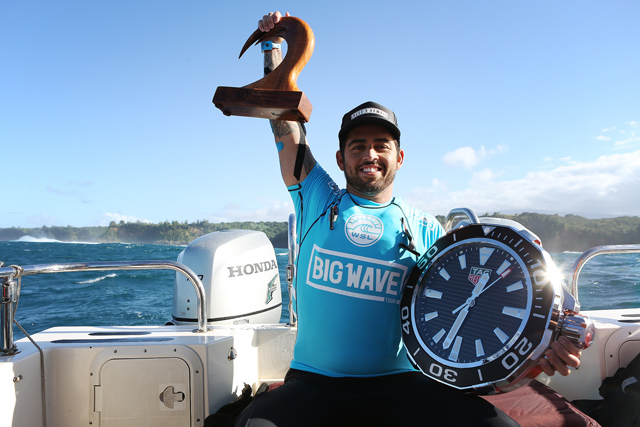 Hailing from the nearby Maui town of Ho’okipa, near the amphitheater-esque cliffs of the infamous big wave venue at ‘Jaws,’ Kemper has beat out an international field of big wave gladiators to claim the crown as Pe’ahi Challenge champion on a day that saw 40’-to-50’ foot waves contested with no shortage of action, carnage and high drama.

Catching the first wave of the event, the new BWT Rankings Leader never looked back and earned great rides throughout the day, bettering his single-wave scores with each, successive round. The 25-year-old put up a highlight reel of impressive surfing – earning an 8.00 (out of a possible 10) in the Final, which, with the BWT format, equivalates to a 16.00 (out of a possible 20) as a surfer’s top score is scored twice. Backing it up with a 6.77, the Maui native came away with a historic win.

“This is a dream come true,” Kemper said. “We’ve been talking about this moment for years and to have a paddle event in my backyard at, to me, one of the most premier, outstanding waves in the world, means everything to me. I just want to dedicate to this my brother. To paddle Pe’ahi has been a dream of mine for a very long time and to be out there with some of my favorite surfers and best friend – I’m just speechless.”

With the treacherous swell in the water, each of the surfers and WSL water-safety staff kept a close watch on all involved in the event, with several dramatic wipeouts recorded on the live broadcast.

“We passed the word talking out there and I told the boys we can always surf another big day at Jaws but we can never replace each other,” Kemper said. “The main thing is at the end of the day to come back our families. I’m there for everyone and they’re all there for me.

It’s a feeling you can’t reproduce or explain it to people. Just a feeling of breaking through a fear factor where it’s all adrenaline. I’m over the moon – I’m just happy to be sitting here doing this interview.”

Earning runner-up and also a Pe’ahi ‘grom’, Albee Layer (HAW), 24, showcased his affinity for the barrel – earning a standup tube ride that was rewarded with a 7.60. Riding an 8’8”, the shortest equipment in the event, Layer looked unstoppable heading into the Final.

“I was just trying not to psych myself out so I hung out with a lot of friends,” Layer said of his pre-event routine. “My shaper, Sean Ordonez, just keeps going smaller and smaller with my boards and it keeps working better and better for me. I’m just really trying to get in the barrel – I’m not trying to get the biggest wave. That’s the wave I’m always looking for – the barrel. They’re a little harder to find but eventually you’ll get one.”

Earning a third-place, a true legend of the big wave sport, Greg Long (USA) secured the highest single-scoring wave of a 9.00 alongside Shaun Walsh (HAW), during his Round 2 heat – pulling a critical drop and locking into a massive barrel that he was unable to come out of. The 32-year-old Californian knows this lineup all too well and couldn’t believe the waves that were coming in.

“It was probably one of, if not the best waves of my life even though I didn’t make it,” Long said. “It’s been a dream of mine to catch one of these barrels and to see that vision. It’s the perfect direction to do it and get the waves from way out the back. Paddling in it looks impossible to make it all the way to the channel but then you get around that first section coming from behind and you’re set. I was lucky in that heat with the wind settling down a bit and a couple multiple wave sets to clean it up and then that wave came through – just was out the back and got the greenlight to catch it.”

Universally-respected big wave surfer, Ian Walsh (HAW) had an incredible day at Pe’ahi, winning his Round 1 heat and advancing to the Final behind Albee Layer (HAW) in the Semifinals. Walsh also had one of the heaviest wipeouts of the day, but continued to charge through nonetheless.

“There was just a chandelier coming down and it hit my back shoulder and feel like I didn’t penetrate the water at all – just started spinning on the face then a long drop over the falls,” Walsh said. “It takes a lot longer than normal days of surfing when you go over the falls here, so you have a lot of time to think about your mistake. Then it’s really violent, everything is flying everywhere and you’re trying to feel the tension on your leash to make sure the board is not close to you. Just a lot going on – but you’re really just focused on holding your breath and trying to get back to the surface.”

Making his maiden voyage to the infamous break at Pe’ahi, Gabriel Villaran (PER) showed his prowess in taking on the world’s best, including a stacked local lineup, and making a run to the Final – topping Shane Dorian (USA) in the Final. Earning his spot to the Final with a buzzer beater, the Peruvian was elated coming out of his Semifinal heat.

“It feels amazing because this wave is next level,” Villaran said. “The wind is really challenging and is making the drop really hard. It’s my first here so to get a few waves and get a little barrel at the beginning so I’m really happy. The guys out here, especially the locals, are really good and I’m just trying to figure it out. I’m enjoying the day and just really an epic day – to make the final is a great opportunity for me.”