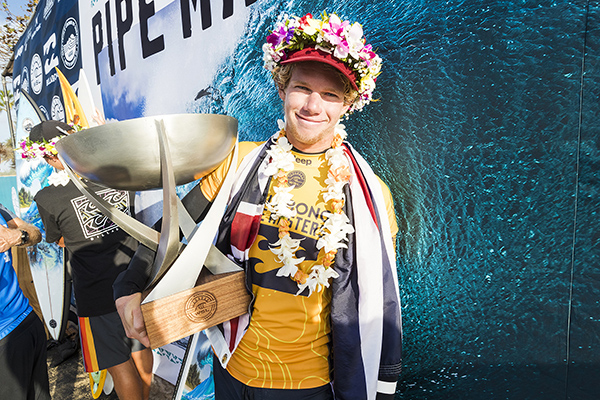 “It’s been my dream to win here at home,” Florence said. “There’s been a nervous build up to this event and I just don’t know what to say, I’m shaking. So many people have been here for me this year and it’s been awesome. It’s been an awesome year and I’m just so stoked.”

Florence’s season started out with strong results during the Australian leg, including his first event win of the year in Margaret River. After two 13th place finishes in Rio and Fiji, Florence steadily improved his results through the remainder of the season. With a 5th place in both Jeffreys Bay and Tahiti, followed by Semifinal berths at Trestles and in France, Florence reclaimed the Jeep Leader Jersey from closest rival Jordy Smith (ZAF). 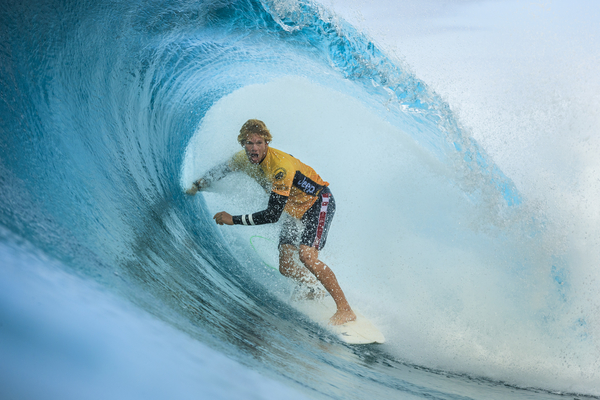 Challengers Smith, Owen Wright (AUS), Matt Wilkinson (AUS), Filipe Toledo (BRA) and Adriano de Souza (BRA) all suffered early eliminations in Portugal, falling out of reach of the title. Going into the Billabong Pipe Masters, only four surfers remained in contention to clinch the title, but contenders Gabriel Medina (BRA), Julian Wilson (AUS), and Smith weren’t able to deliver the results needed to block Florence at his home break in Hawaii. Florence’s victory was sealed after Medina was eliminated today in the Quarterfinals at the hands of eventual event winner Jeremy Flores (FRA).

“I think I learned a lot about myself this year competing with all the pressure, especially coming from last year’s win,” Florence continued. “It’s been a hard year and I’ve had some ups and some downs, but mostly I had a lot of fun. I think that’s what came out of last year and I really, really wanted to enjoy every moment of it.”

Universally-regarded as one of the best all-around surfers, Florence has diligently worked at improving since qualifying for the elite WSL Championship Tour (CT) in 2011. A seven-year competitor on the CT, the surfer form Hawaii claimed his maiden title in 2016 with an early-season clinch in Portugal, having previously finished in the Top 5 twice before (4th in 2012 and 3rd in 2014). With this second title, the surfing world is eyeing the beginning of a new dynasty in high-performance surfing.

“It’s been scary being that close in points to someone like Gabriel (Medina) who’s such a great surfer out here and a fierce competitor,” said Florence. “His comeback in Europe was amazing, he won two events in a row and then was right there in the title race. Surfing with him out here has been nerve racking but it would have been cool if we had a final for the title.

“I couldn’t have done it without my guys traveling with me and I have to thank my mom for all this because she took me and my brothers traveling when we were young and really just got us to love the ocean and I think that’s what we’re all in this for – the love of surfing – so thank you, mom, I wouldn’t be here without you.”

In addition to cementing his status as the best surfer on the planet, Florence spends his free time and celebrity working toward ocean health initiatives and environmental causes.

Jeremy Flores (FRA) claimed his second Billabong Pipe Masters victory today after defeating Florence in an exciting Final. Flores, the 2010 Pipe Master, took out Kanoa Igarashi (USA) and Gabriel Medina (BRA) en route to the Final against the new WSL Champion. Flores rounds out the year at 15th place on the Jeep Leaderboard to solidify his place on the 2018 CT thanks to today’s victory, his best result of the season and his first CT win since Tahiti in 2015.

“Winning the Pipe Masters against John John Florence like that in perfect Backdoor in the last seconds, that’s the best way to win,” Flores said. “I couldn’t think of any better way to win this Pipe Master. I’m so, so stoked and there’s a lot of emotions. Congrats to everyone. Congrats to John John (Florence) and Gabriel (Medina), these guys are next level. My goal was to win this event but this is crazy, I’m so happy.

“To be honest, I don’t like to be that guy that’s deciding titles – it should be a showdown between John and Gabriel, these guys work so hard,” Flores continued. “That’s why honestly when I beat Gabriel I felt bad. It’s been an emotional day and yesterday was stressful. I had to make one heat to re qualify pretty much and I made it with a 4 and a 2. I just wanted to have fun today and I did and the waves showed up. Through all the ups and downs I have so much good support and this is for everyone so thank you. I won this title for France and it doesn’t happen very much!” 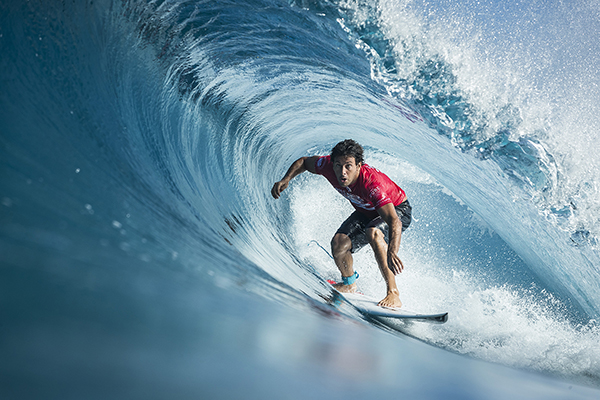 After a slow start to the Final, it was Florence that found the first score of significance with just over twenty minutes remaining with a long barrel that was rewarded with an 8.93. Flores answered with a 7.90 but a relaxed looking world champ was right behind him with a clean tube ride of his own for 7.23 and a solid heat lead. Flores was left searching for an 8.27 in order to claim his second Pipe Masters, but with limited opportunities the clock ran down. In the final seconds the Frenchman found an opportunity and the crowd waited anxiously for the result. The score came in and Flores stole the win from Florence, turning the heat with a thrilling buzzer-beater barrel.

“I almost got a Pipe Masters but I’m super stoked for Jeremy Flores,” Florence said. “That last wave was insane and this whole event has been amazing.”

Florence previously dispatched world title contender Julian Wilson (AUS) (who finished out the year in third place) in the Quarterfinals and then, following news of his title clinching, the new WSL Champion went on to face Ian Gouveia (BRA) in the Semifinals before taking on Flores in the Final.

Gouveia built his scoreline in the Semifinal clash with two mid-range rides while Florence had only small scores. With one minute remaining Florence found the exit from a barrel and then landed an air rotation to steal the win with an 8.73. Gouveia answered seconds later but couldn’t complete the ride and was eliminated in third place.

Kanoa Igarashi (USA) faced eventual winner Flores in the second Semifinal. Igarashi kept busy through the opening half of his heat to hold the top spot but the Frenchman stayed patient and found the wave of the heat for an excellent 9.37. Flores backed it up with a smaller inside wave to move into first position, eliminating Igarashi who takes home a second consecutive Semifinal berth and moves to 17th place on the Jeep Leaderboard.

World title contender Gabriel Medina (BRA) finishes the year in second place on the Jeep Leaderboard with a 5th place finish at the Billabong Pipe Masters after being defeated by Flores in the Quarterfinals.

Medina’s season started out well with a third place finish at the season opener in Australia but a series of less than stellar results saw him slide down the rankings. A third place in South Africa, followed by a runner-up result in Tahiti and then back-to-back wins in Europe saw the young Brazilian rocket up the Jeep Leaderboard and into the world title race. The 23- year-old from Maresias, Sao Paulo became Brazil’s first WSL Champion when he clinched the title in 2014. Medina has been in the World Title race every year since his maiden World Title victory in 2014 (No. 3 on the Jeep Leaderboard in 2015 and 2016).

“2017 was a great year,” said Medina. “I had an injury at the beginning of the year which wasn’t great but I tried to do my best. I had some bad results but I also had some great results. I’m so tired right now because I put everything in the water. I just tried to never give up because there’s always a chance no matter what’s going on. That was a long year and it’s hard to deal with all the ups and downs so it was stressful. That’s all part of the game, you just have to do your best. My goal here was the final but I’m stoked everyone got to watch and I’m coming back for next year.”

11-time WSL Champion Kelly Slater (USA) was dispatched by Medina in Round 4 Heat 3. The Brazilian went all out in the battle against the American with two excellent-range scores, an 8.90 and a near-perfect 9.07. Slater charged into numerous tubes but was not able to escape a majority of his attempts. Stuck needing two new scores to overcome the 2014 WSL Champion, Slater was not able to answer and is eliminated in Equal 9th place. 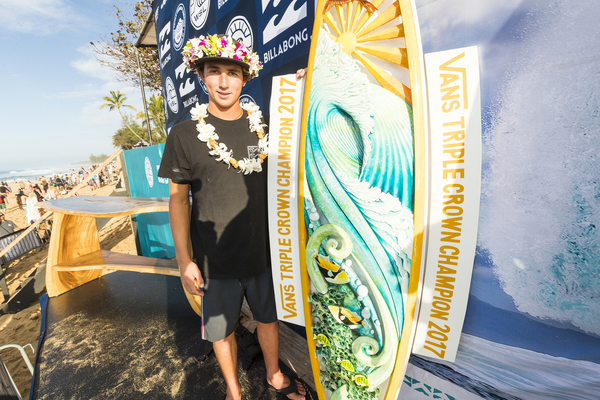 Caption: Griffin Colapinto (USA) becomes the first Californian to win the coveted Vans Triple Crown of Surfing and the result also sees him secure his place amongst the world’s best surfers on the Championship Tour in 2018.
Credit: © WSL / Cestari

Freshly qualified for the 2018 CT, Griffin Colapinto (USA), 19, added to his thriving season by taking the 35th Annual Vans Triple Crown of Surfing honor today and became the first Californian to ever win the coveted surfing series.

“I’m feeling incredible right now and it’s the best feeling ever,” said Colapinto. “I was just looking at the names that have won the Triple Crown, just all the names on there are insane and to win after John John (Florence) won last year is amazing. It’s been a really fun day watching the contest and to see all the action. John, congratulations on winning the World Title, I’m so stoked for you. And Jeremy winning the Pipe Masters, two times now, that’s insane. Just really excited for next year and for Snapper and I think there will be a lot of energy there and to have my name on a jersey will be special. Thanks so much!”

Colapinto captured a runner up finish at the first Vans Triple Crown jewel, the Hawaiian Pro at Haleiwa Ali‘i Beach Park, then went on to final at the second event, the Vans World Cup at Sunset Beach, for a commanding lead on the series. After Italo Ferreira (BRA) went down to Igarashi in the Quarterfinals the young American secured his victory.

The world’s best surfers will return in 2018 with the kick-off event on the Gold Coast in Queensland, Australia in March.

For highlights from the Billabong Pipe Masters check out WorldSurfLeague.com.