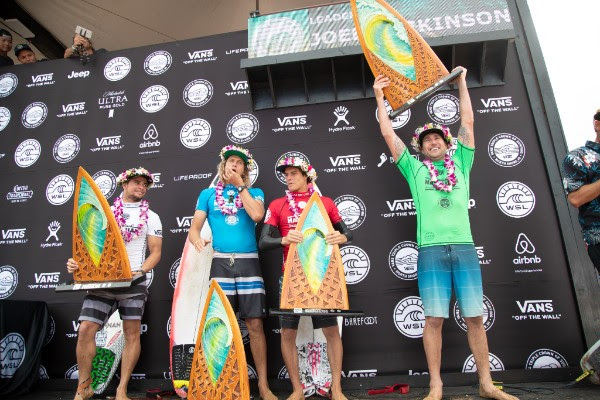 Haleiwa, Oahu/HAWAII — (Saturday, November 17, 2018) – 2012 World Champion Joel Parkinson (AUS) was a vision of classic power surfing today at the Hawaiian Pro and earned the event win for the second time in his professional career. The Australian is now the front runner for the 36th Annual Vans Triple Crown of Surfing (VTCS) title after besting a dynamic Final field that included Mateus Herdy (BRA) who earned runner up, Ricardo Christie (NZL) who finished third and Deivid Silva (BRA) in fourth.

Parkinson will compete next at the Vans World Cup of Surfing, the final World Surf League (WSL) Qualifying Series (QS) event of 2018 and a Men’s QS 10,000, in his hunt for a fourth VTCS title after he won the series three consecutive times in 2008, ’09 and ’10. 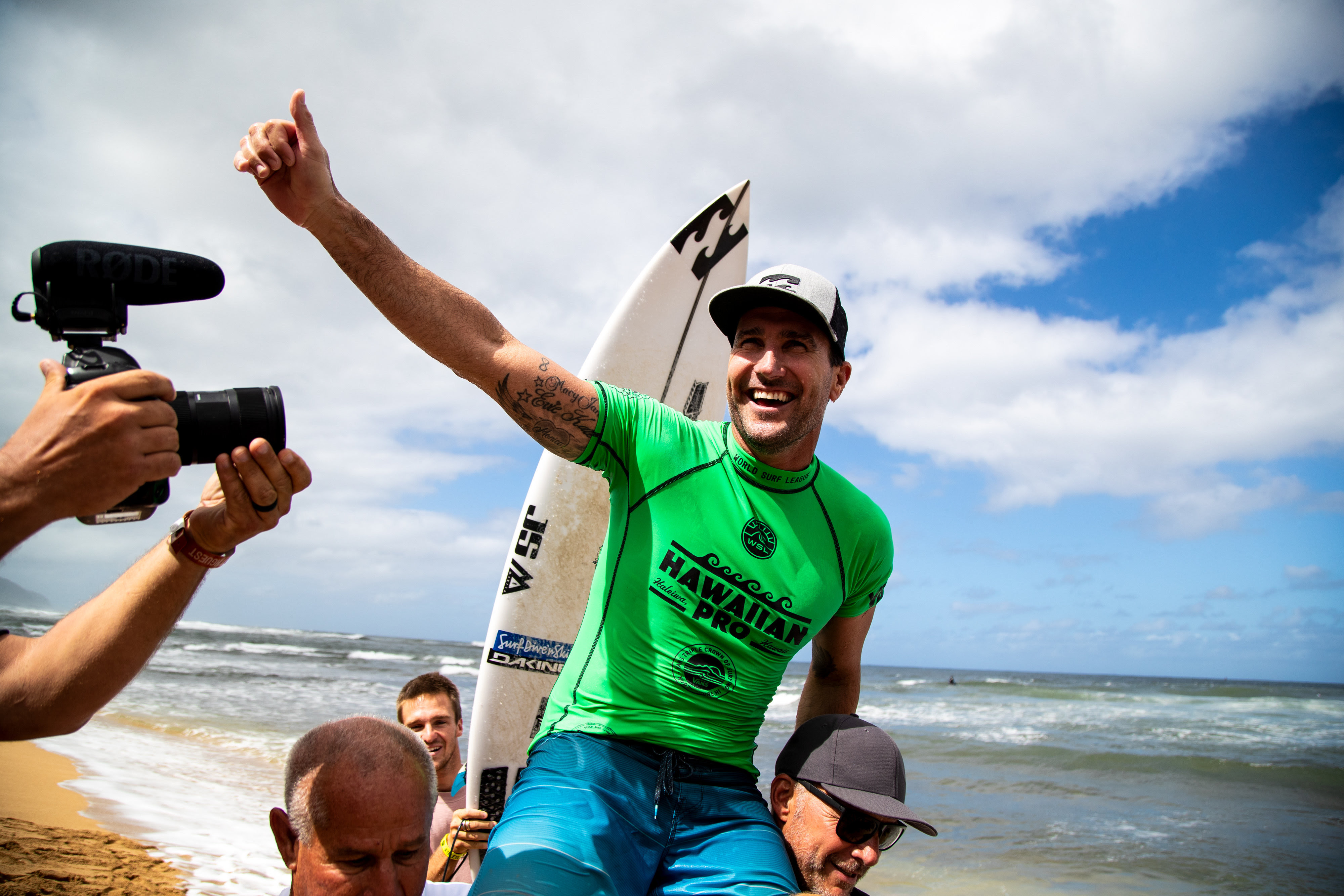 Joel Parkinson is chaired up the beach after winning against a youthful trio of QS competitors. Credit: © WSL / Heff

The Final was an incredible clash of classic surfing versus progression, old school versus new school, as Parkinson, 37, and Herdy, 17, went head to head with high scoring rides. The waves turned on for a rapid-fire exchange among all finalists, and spectators were treated to a variety of power carves, barrels and aerial maneuvers throughout the 35-minute heat at Haleiwa Ali’i Beach.

Parkinson got off to a strong start with a beautiful opening turn followed by another arcing carve for a 7.50, but Herdy answered back with an 8.83 after an impressive tailslide on his closing hit. Each finalist earned excellence as mother nature provided an onslaught of waves and by midway through the heat, it was anyone’s day. Christie’s best wave, an 8.40, was for a wrapping first turn into a tail slide followed by a quick barrel, while Silva jumped on the biggest wave of the Final and powered out an 8.53 for a big vertical snap on his first turn.

The win inevitably became Parkinson’s after he nailed a near-perfect 9.33 with a combination of smooth maneuvers on a frothy wave face and then an 8.03 to put a stamp on his domination with timeless power surfing. The 2018 Hawaiian Pro marks his first win since 2013 and final competitive appearance at Haleiwa. 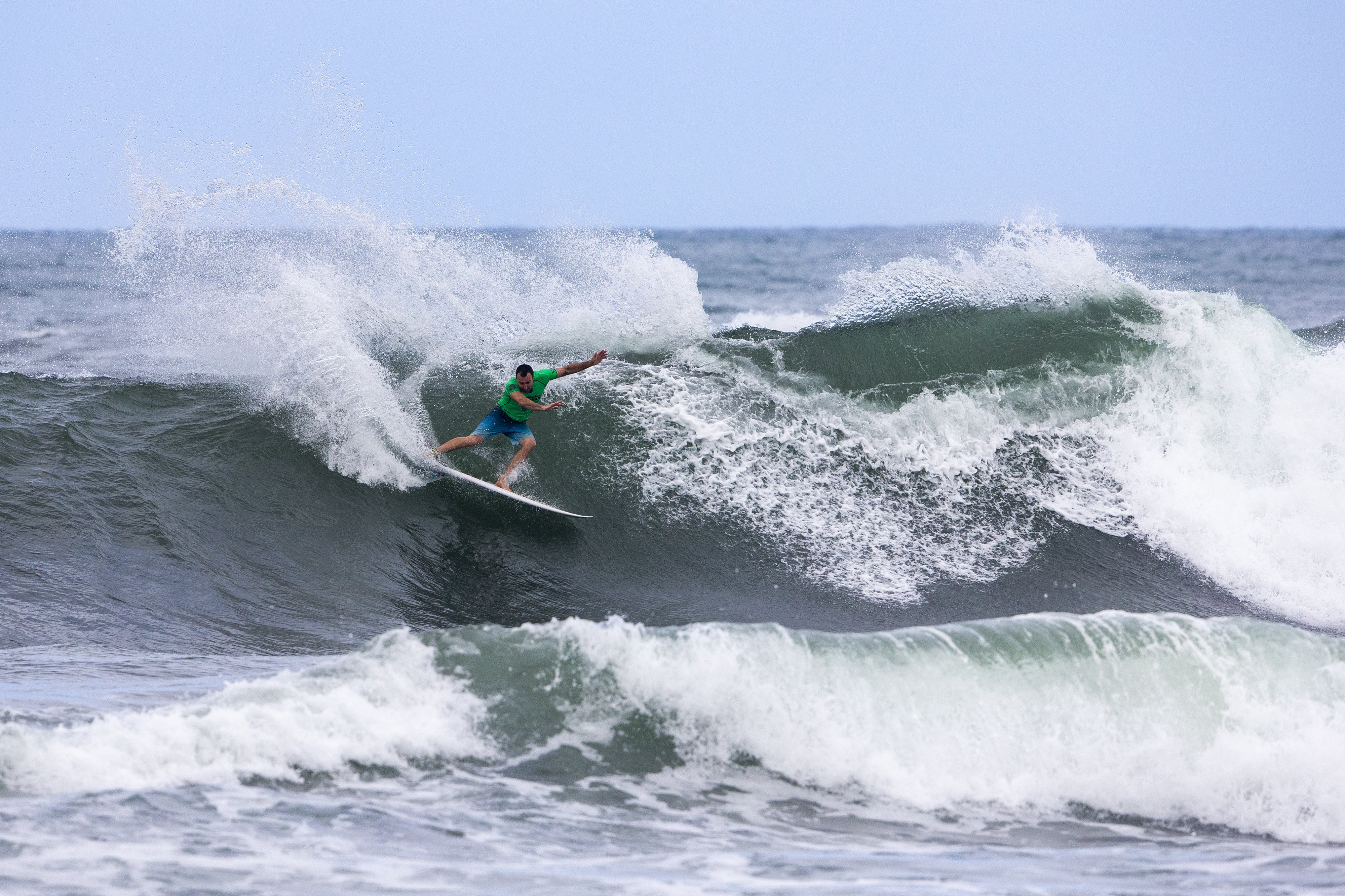 A Vans Triple Crown veteran, Parkinson is on his way to a fourth title after today’s win puts him in the lead. Credit: © WSL / Keoki

“Oh man, I’m just shocked, I just started to feel it, I feel like I want to surf another heat,” said Parkinson atop the awards stage. “I actually really enjoyed the event, that’s probably been the key for me at this stage of my career, to enjoy it. That was enjoyable. I’ll miss moments like that but I’m glad they’re coming to an end.”

Parkinson will surf his final event of his career during the Billabong Pipe Masters, which is the last stop on the WSL Championship Tour (CT) and culminating competition of the VTCS. The holding window is December 8 – 20 and will take place at the North Shore’s infamous Pipeline at Ehukai Beach Park.

“Thank you everyone here in Hawaii that lends us the beach and lets us enjoy it and the waves, I really appreciate it,” Parkinson continued. “Hawaii is a special place to us all. For years to come I think we’ll be back and enjoying these waves… If this is the last time I ever stand on stage, surfing has been amazing to me. I love it. Next year I’ll just be a surf fan like all you guys, can’t wait. I’ll always love surfing, I’ll always love the people in surfing and I thank you all for being a part of it and cheering me on! Come December 21, I’m a surf fan and I’ll watch and enjoy watching.” 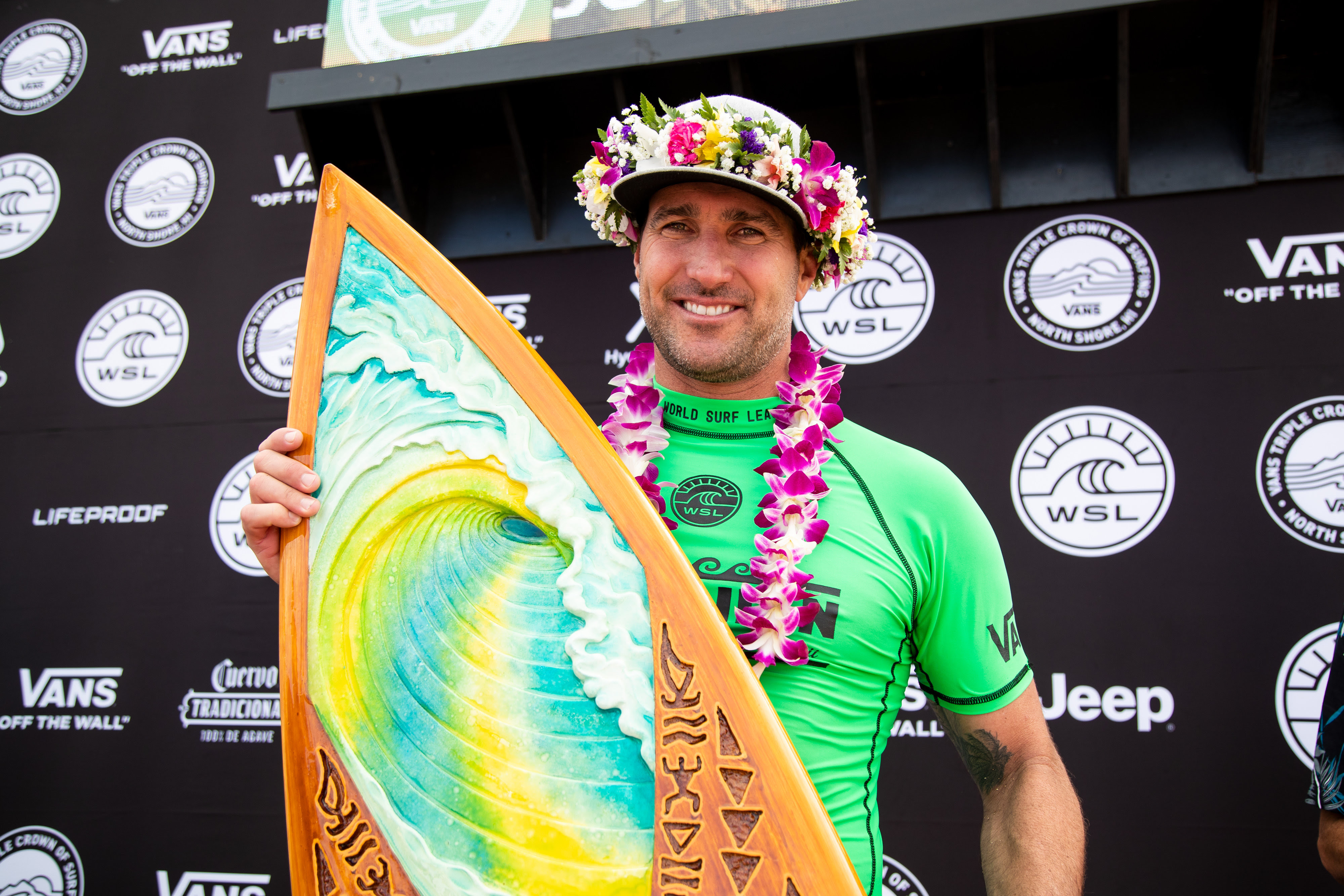 Parkinson was awarded a hand-crafted trophy made of recycled surfboards that were broken along the North Shore. Credit: © WSL / Heff

Herdy was among the youngest in the 128-man draw and made it to the podium all the way from Round 1. Today’s runner up finish boosted him 49 spots up the QS rankings, from No. 61 to No. 12, and with another solid result at the Vans World Cup, he could be one of the year’s biggest qualification stories.

“I don’t know it feels better than the win I think, I just came here to win some heats and I’m in the final against my idols,” Herdy said. “Thanks to the Brazilians and everyone here on the beach!” 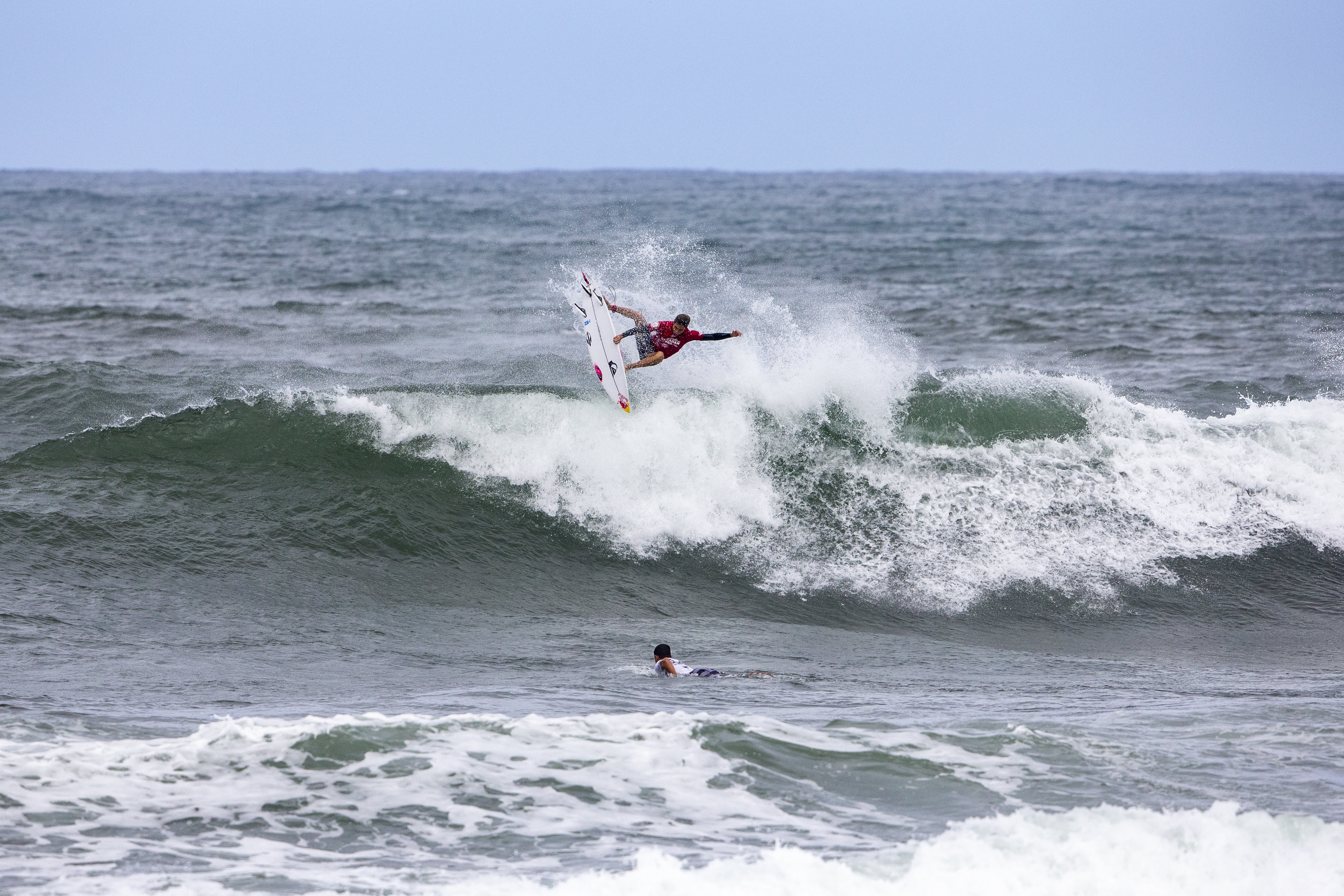 Mateus Herdy looked confident in the challenging conditions and demonstrated some of the day’s best high-performance surfing. Credit: © WSL / Keoki

Hawaiian athlete and QS crusader, Seth Moniz (HAW) had a dream run today after advancing to the Semifinals, taking home 5,100 points and officially qualifying for the 2019 CT.

“People were congratulating me, saying I got the points but it never really sunk in yet,” said Moniz. “I knew I wasn’t going to be excited until I heard it on paper and saw it on paper. If I didn’t have this guy, (Rainos Hayes) with me all year round – we did it together. Super stoked.” 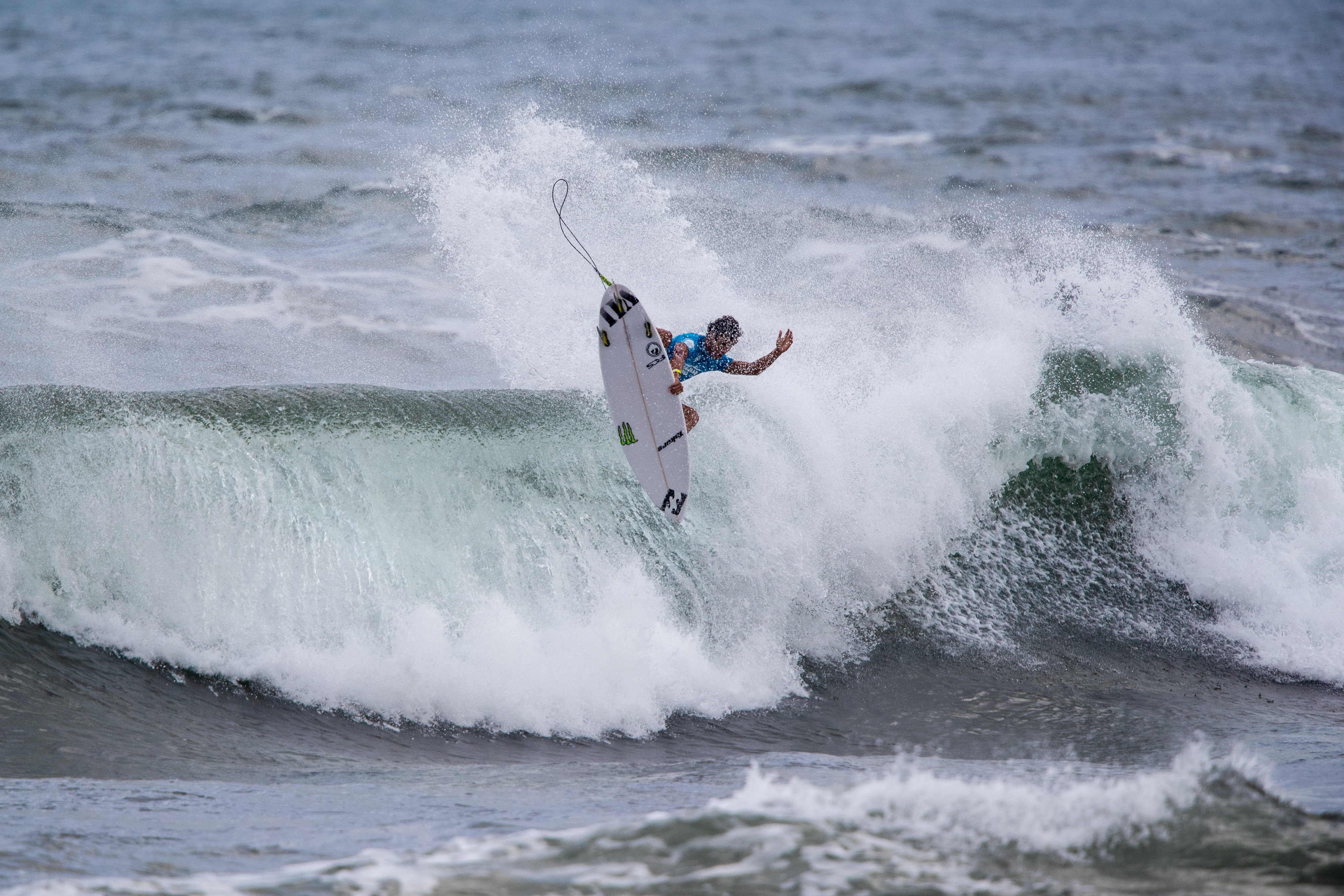 Moniz is now safely in the No. 2 spot on the QS behind Kanoa Igarashi (JPN), who will double qualify for next year’s CT. In today’s competition, Moniz stuck to the fundamentals, but is widely known for his progressive style and aerial mastery. A regular-footer from Honolulu, Moniz will add today’s historic moment to the chapter book of his family’s legacy.

The highest wave score of the day, a 9.37, went to Patrick Gudaduskas (USA) in Semifinal 2. Wave selection was crucial in the challenging conditions and Gudauskas was able to pull out the near-perfect ride for a massive first gouge followed by two more powerful turns. The La Jolla local will need to forge his way to a Semifinal finish at the Vans World Cup or a Quarterfinal result at the Billabong Pipe Masters for a chance at requalification, but given his prowess throughout the Hawaiian Pro and track record at Sunset, this is achievable for the athlete. 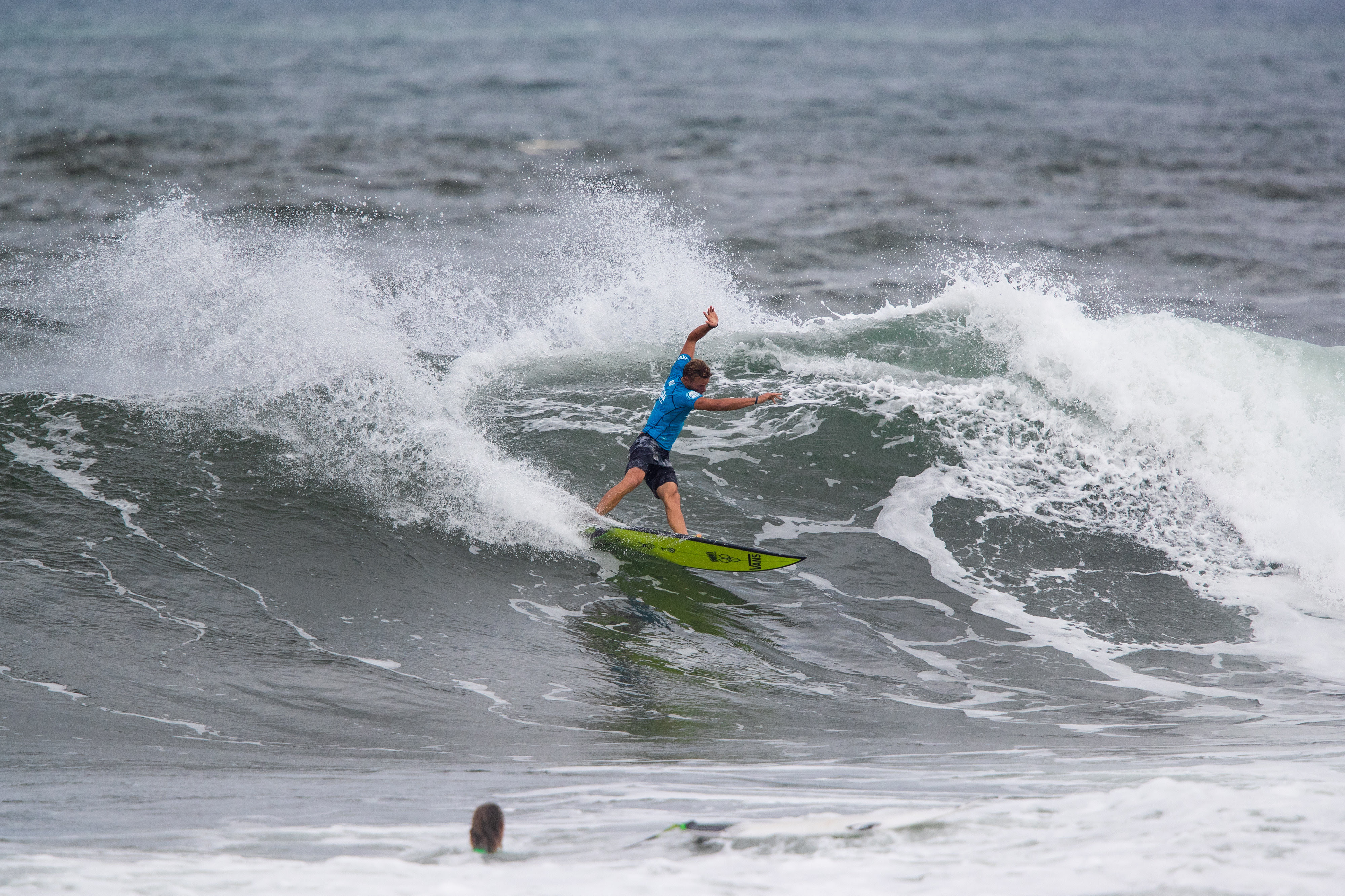 Gudauskas was eliminated in the Semifinal despite earning a massive 9.37 score. Credit: © WSL / Heff

The VTCS now swings to Sunset Beach for the Vans World Cup of Surfing, which has a holding window from November 25 – December 6. In its 44th year of running, the Vans World Cup will showcase more of the world’s best athletes as they tackle one of the best and most consistent big wave breaks on the planet.

Each event of the 2018 Vans Triple Crown of Surfing will run on the four best days of surf within the event’s holding window. LIVE streaming is available on WorldSurfLeague.com, VansTripleCrownOfSurfing.com, Facebook.com/wsllive and the WSL and Facebook apps (Facebook login required for mobile viewing). Or tune into Spectrum SURF Channel, which will televise the action LIVE and in replay on digital channels 20 and 1020HD, across the state of Hawaii.