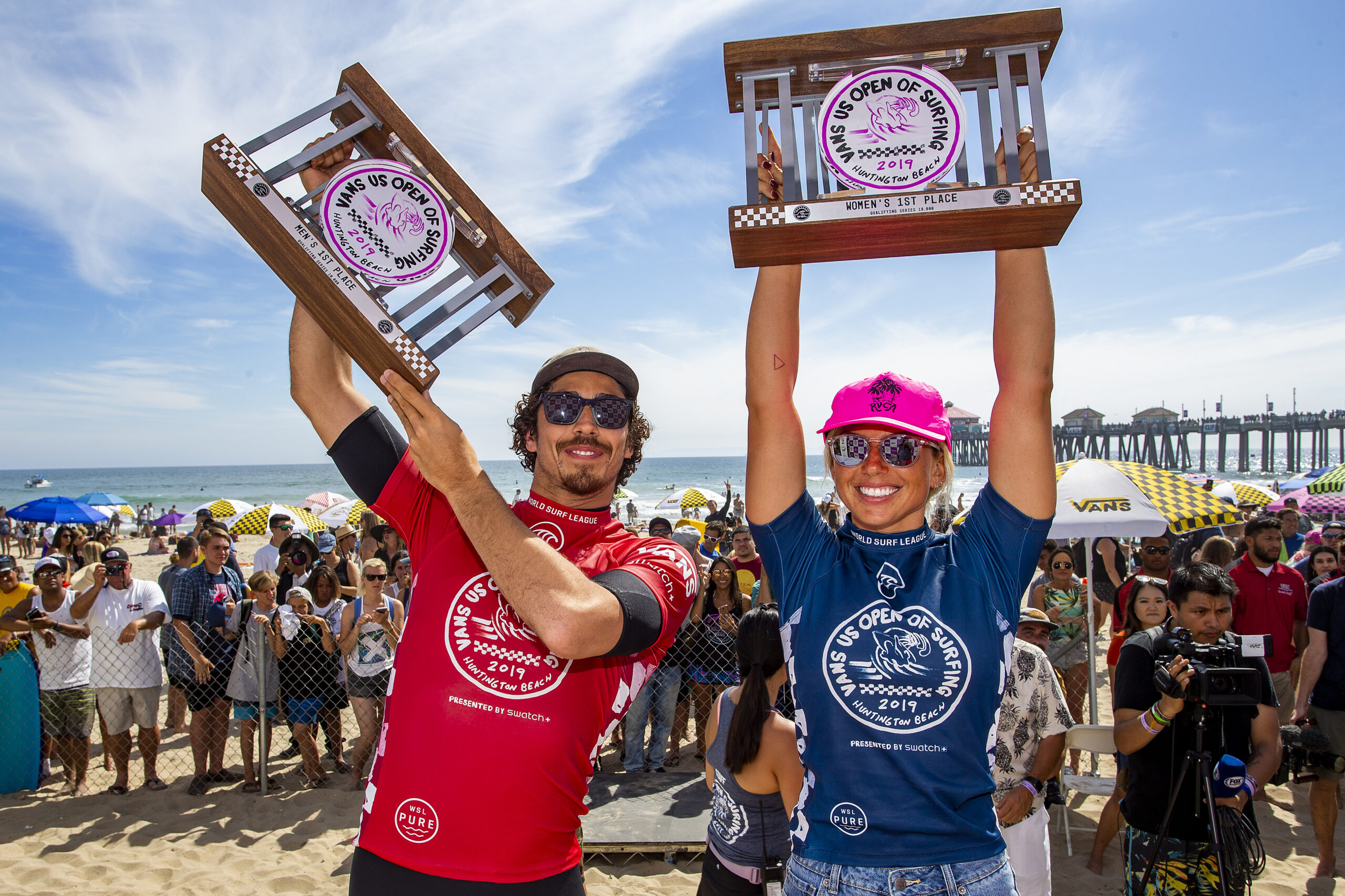 HUNTINGTON BEACH, UNITED STATES - August 4: Yago Dora of Brazil and Sage Erickson of the USA are the winners of the 2019 VANS US Open of Surfing after winning their finals at Huntington Beach on August 4, 2019 in CA, USA.(Photo by Kenny Morris/WSL via Getty Images)
News
·5 min read

The 2019 women’s event marked a historic milestone for the QS with the first-ever QS 10,000 and equal prize money at the Vans US Open. Erickson claimed the all-California Final over defending event winner Courtney Conlogue (USA)in incredible fashion with one of the day’s best performances — a 15.43 (out of a possible 20) heat total. The Ojai native’s backhand went to work while sitting in second place and smashed an excellent 8.17 (out of a possible 10) to push herself in the lead and leave Conlogue in need of an 8.90 for the remainder of the Final.

“I shed a lot of tears when I came in from the water and I just want to say this is dedicated to my grandma who passed two weeks ago,” Erickson said. “It’s crazy how it takes someone to leave for everything they’re about to really set in. A lot of the lessons and things she believed in me, I have to speak over myself here for a second for her and it’s just about the people you value in your life. Whether it’s your friends or your family or even the people you can make a mark on and encourage.”

Erickson had to deal with an all-star cast to get to the Final that truly showed the importance of this event with the competitors involved — defeating CT veteran Malia Manuel (HAW) and former Vans US Open winner Tatiana Weston-Webb (BRA) along the way.

“To be home in California, have a heat against Courtney and to be 10,000 — it’s more than just points,” Erickson added. “It’s equal pay, it’s a prime, it’s a lot for us women and a big shout out to Jessi (Miley-Dyer) for believing in our sport and to Sophie (Goldschmidt) leading the WSL as a strong woman.”

The high-flying antics of Dora came firing right out of the gates on finals day with the day’s top single-scoring wave of a near-perfect 9.27 after soaring through the air and landing it smoothly. The Brasilian CT elite had to overcome one of the Vans US Open’s most insatiable dark horses to date, Liam O’Brien (AUS). Dora’s excellent 8.60 on yet another massive air-reverse before shooting through the pier to finish it off in the Final ultimately sealed his first-ever QS 10,000 victory.

“It feels so incredible right now and I just want to thank everyone who showed up today — it’s just amazing to surf in front of a huge crowd,” Dora said. “It gets me fired up to do my best and that’s what I did today. I gave everything I had and it worked out for me. I just want to congratulate all the finalists and especially Liam, he’s been surfing amazing.”

This win skyrockets Dora 46 spots to No. 4 on the QS ranks and in a position to secure his CT spot for 2020 heading into a vital back-half of 2019. The 23-year-old decimated the hopes of now QS No. 1 Jorgann Couzinet’s(FRA) opportunity of separating himself from the pack in the Semifinals and surviving a scare from former CT competitor Alex Ribiero (BRA) in the Quarterfinals. Now, the Brasilian sets his eyes on Tahiti for one of the CT’s most sought-after events.

“We had waves for nine days which is amazing for Huntington (laughs),” Dora added. “I came out of my house with a goal to win this event and I did it. I can’t even explain how happy I am right now.”

The women’s all-American Final had the crowd roaring for hometown hero Conlogue with every turn as she hoped to claim an unprecedented back-to-back title. But, it wasn’t meant to be with Erickson in dominating form throughout finals day that forced Conlogue into attempting hail mary airs toward the end of the heat. Though a runner-up was disappointing for the Santa Ana, California, native, her explosive air-reverse in Quarterfinal Heat 1 against phenom Caroline Marks (USA) started the day off in amazing fashion that carried through to the end and the recent Huntington Beach Surfing Walk of Fame inductee can carry this momentum forward.

“This week has been incredible and anytime I have the chance to perform in front of my hometown it’s just very special,” Conlogue said. “I’m really happy for Sage, it was really well-deserved and a fun Final. Thanks so much to everyone who came down to cheer us on.”

O’Brien will now look to finish the season off competing in the QS 10,000s and currently finds himself in a qualification position.

“I’m ecstatic and it still feels so surreal to be standing here, I don’t even feel like I’m supposed to be here to be honest (laughs),” O’Brien said. “I’m so thankful for this opportunity and to come as far as I did and can’t say thank you enough for everyone coming down. To make it through some of the heats I did, I can’t believe it. I’ll keep working to improve my surfing as much as I can and to be into the QS 10,000s heading is such an amazing feeling so I’m just really grateful.”

Alongside the surfing, the Vans US Open of Surfing also hosts skateboarding and BMX competitions alongside authentic community activations and artful entertainment in Surf City USA.