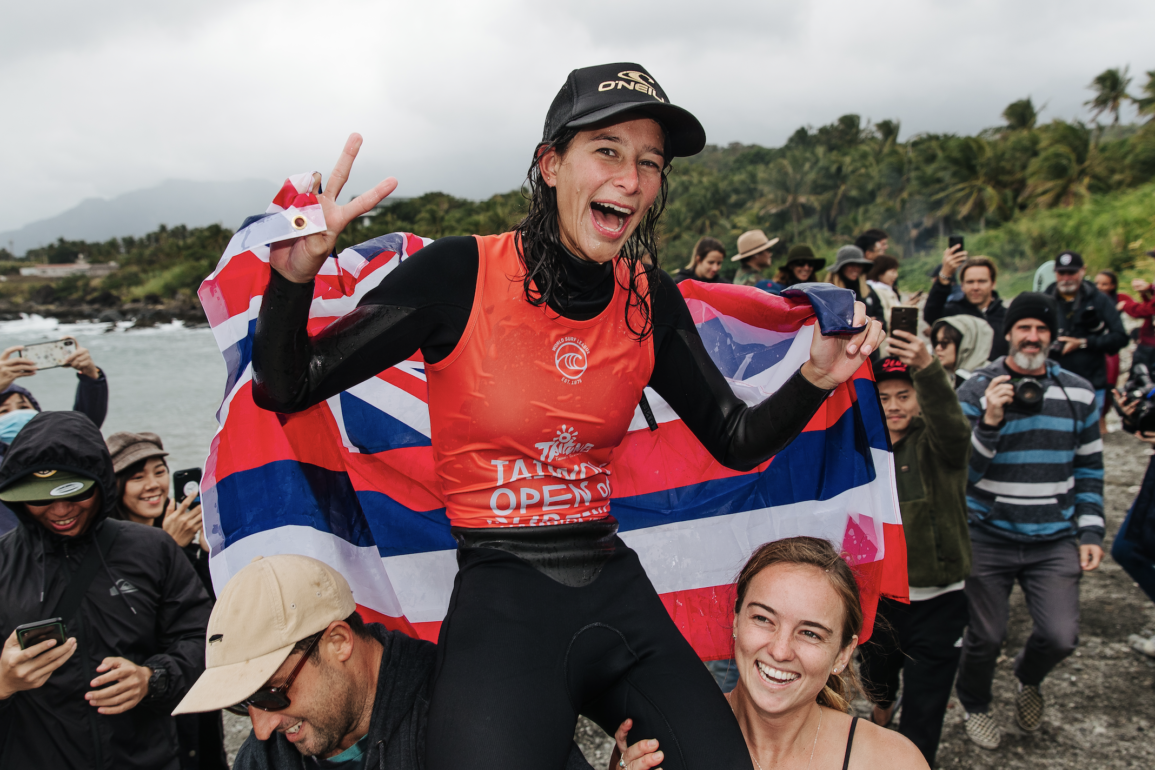 THE LEFT, TAITUNG / TPE (Saturday, December 7, 2019) – Honolua Blomfield (HAW) has won her second WSL World Longboard Title at the 2019 WSL Taiwan Open World Longboard Championships. After a super consistent year for the 20-year-old Hawaiian, everything culminated in pumping but challenging, five-to-six foot surf at ‘The Left’ in Taitung. Blomfield claimed the Championship along with the event win with Rodrigo Sphaier (BRA) who also wins the 2019 Taiwan Open Longboard Tour event.

Blomfield had all the odds stacked against her needing not only to win the event, but, also for Longboard Tour rankings leader Chloe Calmon (BRA) to be eliminated in the Semifinals or earlier. Blomfield couldn’t focus on anything but her own surfing and had to leave the rest to fate. After Calmon’s shock Semifinal exit, to avoid a surf-off for the title, Blomfield had to beat Alice Lemoigne (FRA) in their 35-minute match-up. Blomfield never looked like faltering in the Final, posting a heat total of 12.67 early, nose riding through critical sections on set waves and flowing across the slow sections. She then tactically sat with priority until the dying seconds when she took off on the last wave of the heat to take her second World Title in three years.

“I’m so stoked I don’t even know what to say,” Blomfield said. “I’m so thankful to be a part of this week. I feel like all of the odds were against me and then I made the comeback. I always knew I could win it but I just took it heat by heat then somehow it all came into place and now here I am – I’m just so stoked.”

To take the win, Blomfield overcame Brasilian Chloe Calmon who came into the final event of the season with a decent lead but needed to finish higher Blomfield in Taiwan. Unfortunately for Calmon, Blomfield was too consistent on Finals day leaving her to finish runner-up to the World title for her third year.

“It’s always so scary doing battle with Chloe,” Blomfield continued. “She is such an incredible surfer and always gets the best out of me. I just want to thank my family and sponsors for always supporting me. I still can’t believe I’m World Champion again.”

Brasilian Rodrigo Sphaier (BRA) was a standout all event, particularly when competition moved to the pristine point of ‘The Left.’ His poise and grace on the nose, particularly into the strong off-shore winds, didn’t go unnoticed, especially in the Final when he scored the highest single-wave score of the event, a 9.00-point ride, for an incredible hang 10. Sphaier’s win didn’t come easy as he had to beat former three-time World Longboard Champion Taylor Jensen (USA) who was on fire all event. Fortunately for Sphaier, Jensen struggled with wave selection which gifted Sphaier the biggest win of his career on the WSL Longboard Tour.

“I’m speechless right now,” Sphaier said. “This has been a dream of mine for my whole career and I have worked so hard for it. I have been competing for so many years and was beginning to think that this day would not come. To finally find my victory in such amazing waves against a champion surfer like Taylor feels incredible. I want to thank all of my family and friends and my girlfriend for always supporting me. Taiwan is a special special place for me – the waves, especially here at the left, are so good. I love this place.”

Alice Lemoigne (FRA) was one of the form surfers of the week especially when competition shifted to The Left, a wave that could be compared to Saint Lue on her home of La Reunion Island. Lemoigne dominated every heat on Finals Day, including her Semifinal matchup where she eliminated World Title favorite Chloe Calmon. In the Final, though it was all Blomfield as Lemoigne took a well-fought second place.

“I’m so happy to have made the final at such an amazing event like this,” Lemoigne said. “This has been such an incredible week for longboarding. I want to thank WSL for all of the hard work behind the scenes to move us to ‘The Left’. It was the best cool and I’m so happy to have been a part of this all.”

Three-time WSL World Longboard Champion Taylor Jensen (USA), although not taking the win, was stoked to have been a part of such a historic week of surfing, particularly at ‘The Left’ in Taitung.

“This was a really special few days for Longboarding,” Jensen said. “We had some pretty big and crazy conditions, but it was the best option for us, so to see the commitment from the WSL to move the event is really cool. It was a fun day of surfing and I’m stoked for Rodrigo – he was absolutely ripping all event and especially today, I couldn’t be happier for him.”

The Taiwan Open World Longboard Championship runs from December 1 – 7. For more information and to watch all of the action from the Taiwan Open of Surfing, head to www.worldsurfleauge.com or download the free WSL App.