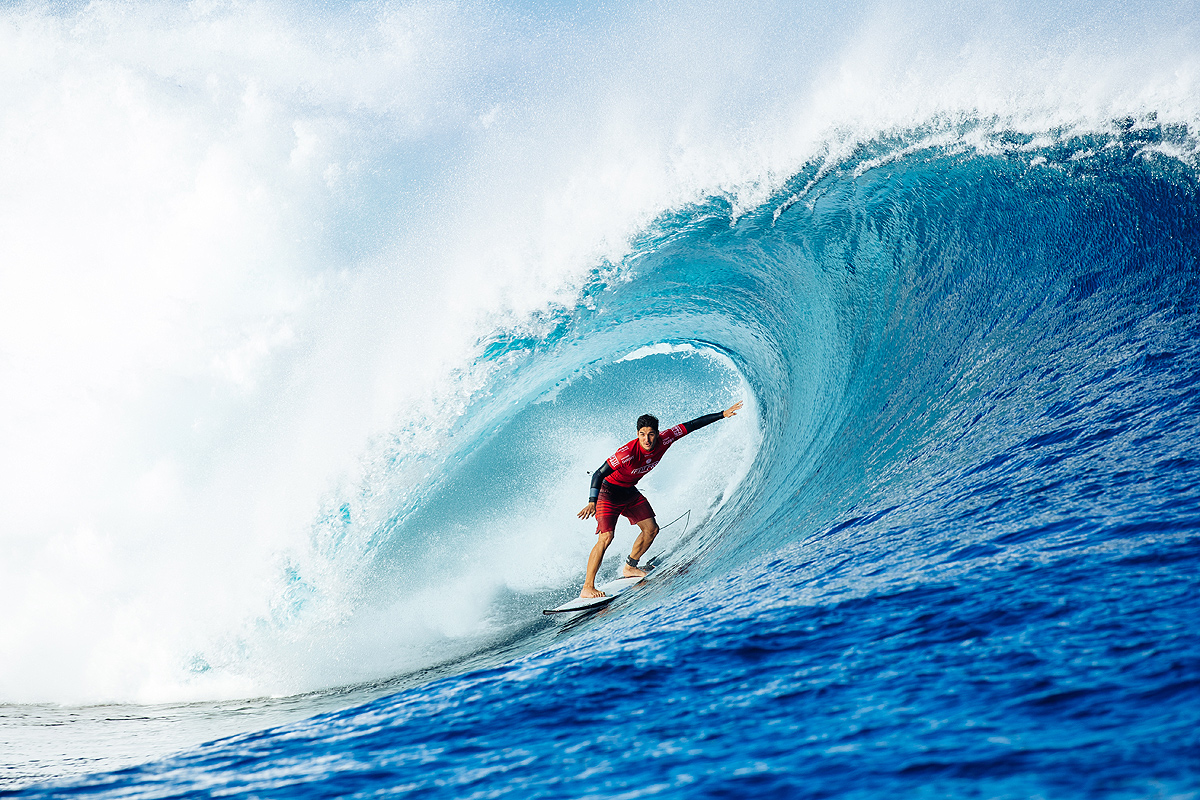 Action continued today at the Outerknown Fiji Pro with big eliminations in Round 2 and the first four heats of Round 3. Cloudbreak served up six-to-eight foot conditions for the world’s best surfers as they battled to advance in the fifth stop on the 2017 World Surf League (WSL) Championship Tour (CT).

Italo Ferreira (BRA) shocked the competition today with his victory over Gabriel Medina (BRA), in his first event back after suffering an ankle injury on Gold Coast. Medina, 2014 WSL Champion and defending event winner, opened up Round 3 Heat 4 with an authoritative 8.10 (out of a possible 10). Ferreira found the barrels and turns to battle back with an exemplary 7.83 and 8.00. Ferreira held control with pressure on Medina to score a 7.73. In the dying seconds of the heat, Medina found his opportunity but fell just 0.36 points short of the win.

“That was amazing,” said Ferreira. “It is always fun to compete with Gabriel [Medina] — he is a hard competitor. In the last few waves I was just getting good barrels and feeling no pressure. I am so happy to be back again. I just want to say thanks God, my family, girlfriend and all my friends supporting me. I am just enjoying myself and catching good waves.”

Medina is currently ranked 10th on the Jeep Leaderboard and will leave with a 13th place result. The Brazilian has struggled to advance past Round 3 this season, as his finish today marks his third early exit (13th place at Bells, 25th at Margaret River).

Ian Gouveia (BRA), 2017 CT Rookie, upset the competition with his elimination of current World No. 2 Owen Wright (AUS) in the opening heat of Round 3. Gouveia set the pace with an excellent 8.33 with a series of barrels, while Wright secured 6.33. With less than ten minutes on the clock, Gouveia utilized his priority to improve his situation with a strong 7.33 to put pressure on Wright. Wright made several attempts to score the 9.33-requirement, but lacked the 0.40 point difference on his final attempt.

“I am super stoked to finally make Round 3 and go to Round 4,” said Gouveia. “It is an amazing feeling to be here at Fiji and to beat Owen [Wright]. He is probably one of the best surfers out here. I knew I had to do something crazy and in the heat I found the first wave where I was able to get that barrel and then just had to get the backup.”

Wright, who earned the historic Perfect 20 and win at this event in 2015, will exit in 13th place. This finish marks Wright’s worst result of the 2017 season and he will look to the Corona Open J-Bay to strengthen his World Title campaign.

“Pretty bummed with that,” Wright said. “It is just a result, but it hurts because it is a perfect left-hander. That is just how things go sometimes. The season has been great so far. For me it was a lot about recovery, and I feel like I turned a corner just in Brazil where I felt a little bit out of that recovery stage and more into building. I feel more aggressive and attacking heats. At the start of the year I had some good results but I never felt that ‘go for it’ feeling. I am excited to compete now and excited for the tour.”

WSL Champions Kelly Slater (USA) and Joel Parkinson (AUS) found success today in their respective heats. The CT superstars will continue to compete for the event title to add to their decorated careers.

11-time WSL Champion Slater exhibited his dominance at Cloudbreak with a win over 2017 CT Rookie Ethan Ewing (AUS). The Round 2 heat saw Slater throw up big turns for a 7.73 and 7.80 and the win. Ewing has yet to earn a heat win this season and will leave in 25th place. Slater will face rookie Connor O’Leary (AUS) in Round 3 Heat 8.

“I had Ethan [Ewing], who I do not underestimate at all,” Slater said. “He won everything last year and is an amazing surfer. I was stoked to have a heat with him, but I was nervous. It was a slow heat and I kind of played it more right than he did. I’m on a new board and just experimenting with some stuff. I was a little nervous and jittery out there, but I am happy to get the win and loosen up.”

2012 WSL Champion Parkinson eliminated event wildcard Yago Dora (BRA) to open up the day (Round 2 Heat 2). Parkinson utilized his elite tour experience to optimize his priority on the best waves. Dora put up a solid fight with the highest single-wave score of the match-up, a 6.83. Only trailing by 0.33, the young Brazilian could not find the wave to combat the veteran. Dora will be eliminated in Equal 25th place in his second-ever CT event.

“I was really nervous – I was nervous coming here and I was nervous out in the heat,” said Parkinson. “And I was thinking to myself that that is a real good thing. It is a positive for me. If I am getting nervous, it means I still want to win, and I am happy with that. Hopefully my wins do not come with a six and a four, but I’d like to get some good scores.”

In addition to Gouveia’s success, the rookie class represented at Cloudbreak today with big performances from the young competitors. Leonardo Fioravanti (ITA) and Joan Duru (FRA) found success in their Round 2 heats, while Ewing, Ezekiel Lau (HAW) and Frederico Morais (PRT) will be eliminated despite their strong showings.

In his career-first heat win as a CT competitor, Fioravanti defeated World No. 12 and veteran Adrian Buchan (AUS) in Round 2. The Australian fired off a commanding 8.50, while the Italian showcased his barrel riding skills and sharp backhand snaps for an excellent 8.33. The heat came down to a battle of the backup scores, with Fioravanti gaining a marginal 0.39-point lead for the win.

“I am stoked to make finally make a heat,” said Fioravanti. “The tour has been amazing, but it has been hard for me. I’ve been learning so much. It has not just been my surfing, but little things that I have to get better at. Hopefully I can take this confidence and improve from that in my next heat.”

Morias fell to 2017 World Title contender Julian Wilson (AUS) in Round 3 Heat 2. Morais leaves in 13th place, while Wilson marches on to non-elimination Round 4.

In particular, Zietz put on a show with his phenomenal 18.43 two-wave score over injury replacement Bino Lopes (BRA) in Round 2 Heat 3. Zietz found two deep, running barrels to earn a near-perfect 9.00 and 9.43 and put Lopes in a combination situation. Zietz will be up against Wiggolly Dantas (BRA) in Round 3 after Dantas took down compatriot Jadson Andre (BRA) in Round 2.

“It was a little shaky at the beginning, but I think the swell just arrived,” said Zietz. “After I got a score, I relaxed a little bit. My theory in that heat was to worry about getting in the barrel first and then worry about how deep you are. That kind of worked. That one had a 10 written all over it, I just didn’t grab the rail on the takeoff!”

Wilkinson competed in Heat 3 of Round 3 to claim his spot in the next round. Wilkinson dispatched Miguel Pupo (BRA) with a 16.84 combined score. Stuck needing two new scores, Pupo was not able to strike back.

“I had a plan to put some turns down at the start,” Wilkinson said. “I got two 7s right off the bat so I could wait for waves. I think Miguel [Pupo] had a plan to be patient, but I got a few under his priority. It was such good fun.”

Flores also put on a stunning performance in his Round 2 matchup against replacement surfer Nat Young (USA) with his dominant 17.57 two-wave total. Flores will face fellow veteran Parkinson in Round 3 Heat 9, while Young walks away with a 25th place result.

Event officials will reconvene tomorrow morning at 7:00 a.m. local time to assess the conditions and make the next call.

Surfline, official forecaster for the Outerknown Fiji Pro, are calling for: SW swell mix will trend down on Tuesday, although still relatively solid in the morning. Smaller leftovers are expected Wednesday.  New, long period SW swell will slowly build through Thursday, likely peaks Friday and then slowly eases on Saturday.  More swells are possible during the final four days of the waiting period.