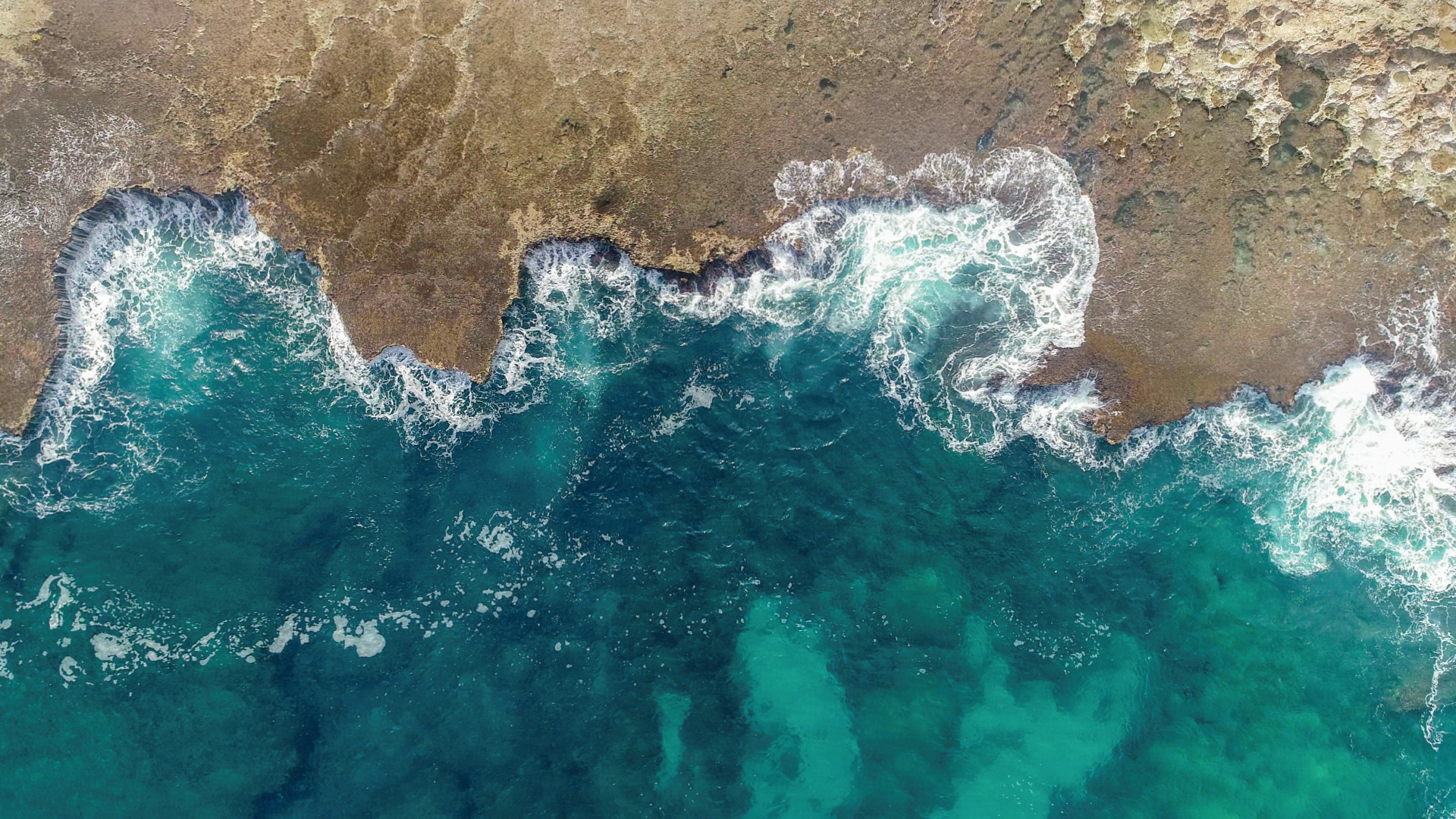 An effort to positively impact the health of our oceans, land, and air.

The realities of climate change and projections for our planet can be terrifying. But know this: you are not alone in feeling overwhelmed when inundated by this scary science. So Freesurf decided it was time to spread some good news, highlighting some steps (large and small) in the right direction. These inspiring surfers and ocean-minded projects remind us that small changes in yourself and your community can make a big difference in the scope of the world.

The realities of climate change and projections for our planet can be terrifying. But know this: you are not alone in feeling overwhelmed when inundated by this scary science. So Freesurf decided it was time to spread some good news, highlighting some steps (large and small) in the right direction. These inspiring surfers and ocean-minded projects remind us that small changes in yourself and your community can make a big difference in the scope of the world.

Maui’s Ma’alaea Bay, home to arguably the “world’s fastest wave,” has a long and fraught relationship with man. Over the years, repeated plans to expand the breakwall and harbor, essentially destroying the wave, have been proposed and defeated by the widespread community opposition. Additionally, decades of sediment run-off, exacerbated by upslope development, have significantly eroded water quality in the bay. But better days may soon be on the horizon, as a comprehensive plan to improve water quality in the bay is being put into action including using live oysters to clean the bay.

“Hawai‘i’s nearshore ocean waters are not supposed to have too much phytoplankton, but fertilizers and wastewater nutrients such as nitrogen, phosphorous and potassium cause algae blooms. Oysters feed on microalgae, which ultimately makes the water clearer and better for corals. Estimates are that a single oyster can filter up to 50 gallons of ocean water in a day depending on conditions.”

Working in tandem with the water-filtering oysters, the two-part plan will also identify and minimize run-off upstream to stop water contaminants at their source. With Ma’alaea being one of the most fickle waves in the world, as the narrow channel between Kaho’olawe and Maui’s southern tip restricts it to breaking from only the most specific of swell direction, the next time the wave comes alive you could be looking at blue barrels instead of chocolate brown.

Freesurfer extraordinaire and one of San Clemente’s Positive Vibe Warrior brotherly trio; Dane Gudauskas is a man of the world. We touched base with him midway through a West Africa surf mission. The wandering pro opened up about how he goes green even while on the go.

The Small Steps Add Up
Today, I filled up my Hydro Flask full of water. I know it doesn’t sound like some massive contribution, but I get excited to think about the long term contribution that will have, not using single-use plastic water bottles. I love my Hydroflask for that reason.

Be Inspired
I feel like the ocean really teaches you about respecting nature as a greater energy force. If you never become vulnerable to our earth’s energies, like riding waves or even floating along in a riptide, you may never grow to understand its significance and create a long lasting relationship and respect for it.
I think the most positive impact has come from passionate people really inspiring others to see how everyone’s old habits of consumption or diet could be endangering the future of the planet. That’s how I have made the most significant changes to how I operate in my life, by taking it upon myself to learn new habits, that undoubtedly if more and more people become inspired to adopt, will have a positive impact on our environment.

Plant-It for the Planet
Grow a garden in the backyard, or on the back porch or balcony. Anywhere you can plant something that fruits or flowers and grows, just go for it!

Here in the Aloha State, colorful rainbows grace the sky with their presence on a near-daily basis. But look down as you enter the water from a highly-trafficked shoreline like Waikiki and that rainbow glaring up at you is anything but beautiful. These ocean water slicks are partially caused by the oily run-off from suntan accelerators and sunscreens. The multi-colored film is literally and figuratively just the surface of a problem that runs much deeper: several chemicals commonly found in sunscreen ingredients are contributing factors in the slaughter of Hawai’i’s corals. The offending chemicals include oxybenzone and octinoxate. The chemicals have been linked to an increase in the coral’s susceptibility to bleaching, tantamount to the death of this maritime plant-like animal.

The good news? Voters in Hawai’i overwhelmingly decided they wouldn’t stand for this. In 2018, a measure was passed ensuring all sunscreens sold in the state be “reef friendly”. In other words, the sunscreen’s ingredient list must be free of the toxic chemicals. The ban takes full effect January 1, 2021, but people have already begun making the switch. It is now easier than ever to buy “reef friendly” sun protection, made without oxybenzone and octinoxate. (Just double-check the ingredients list before you buy as “reef friendly” is not an FDA or CDC regulated designation.)

The ban’s charismatic megafauna was coral. But in actuality, it has reached beyond those colorful corals. It got people talking, raising awareness amongst the general population. Surfers and beachgoers are more connected to the effects their choices have on the health of Hawai’i’s marine life. This heightened sense of awareness will not only protect the reef from those chemicals now but has generated a ripple effect of understanding surrounding our choices as consumers and the impact we have on the environment going forward.

As part of the squad at Community Compost Movement, Ms. Dawson is well-versed in all things eco. The nonprofit processes the food waste from the Triple Crown as part of the WSL’s sustainability initiative. Leah just returned from DC as part of the Surfrider Foundation’s #SurfriderHillDay during which pro athletes and activists voiced their concerns about climate change and environmental policy to concerned senators.

Say Good-Bye to Plastics
As a lover of the ocean, one cannot turn a blind eye to the obvious destruction of plastic abuse. It’s now on every coastline around the world. So the more we choose to avoid plastic in our purchases, the better for our oceans and marine life. Our most powerful actions we can take are the ways in which we vote with our money.

The Hidden Costs
Question first if you really need to buy something. Try to source it second-hand whenever possible. Conscious consumerism has the most positive effect on our environment because individuals are making choices daily that either protect or harm the environment. On a larger scale, voting for environmentally focused candidates is imperative moving forward.

Think Globally, Act Accordingly
Plan your days and weeks out to limit how much driving you have to do. If you’re going to travel, offset your emissions by supporting efforts like @seatrees who is planting mangroves and trees in tropical areas to sequester carbon. Start composting! Check out @communitycompostmovement. Contrary to popular practice, food waste does NOT belong in the trash! Eat plant-based, even if it’s a couple of days a week. 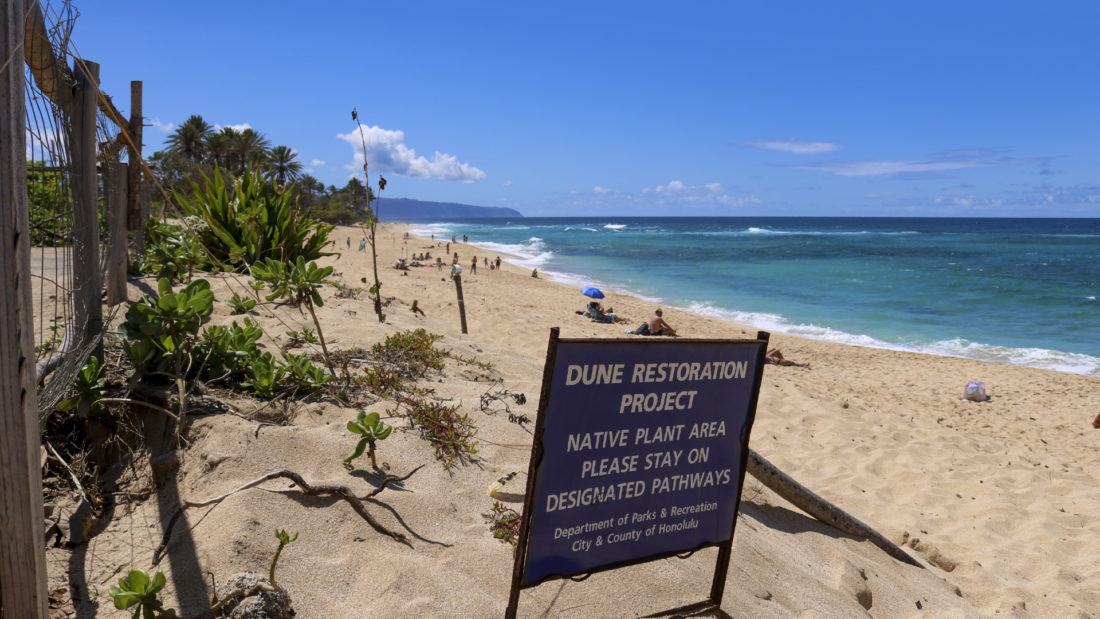 While checking the surf during the last big swell, you may have noticed the signs along the bike path at Sunset Beach. One of surfing’s most iconic breaks, the sand at this right-hander has been suffering in past years, with storm after storm beating down on its exposed shores. Past weather cycles have seen this plenty of times before: the sand gets sucked out, narrowing the stretch of beach between the ocean and the road. But the dramatic and unpredictable weather of recent years has decimated this stretch of coastline, sucking out sand that has yet to get replaced. At one point the erosion was so dramatic that the City and County of Honolulu was forced to reroute the bike trail, uproot palms, and eliminate most of the ocean-side parking to prevent it all from sliding into the sea. Yet busloads of oblivious tourists, amped surfers, and tanning beauties continued to trample down what remained of the sloping dune. Combo’ing the situation are dramatically rising sea levels. A result of melting glaciers and ice sheets, the fast-rising ocean waters also played a part in the shape shifting seen at Sunset Beach.

Responding to the need to save Sunset Beach from permanently disappearing, community members stepped up. Local nonprofit North Shore Community Land Trust hui’d up, implementing a long-game plan to save the sand and maintain the integrity of this iconic O’ahu beach. Headed by T&C’s Adam Borello, the surfer-led organization and their dedicated volunteer group spend every other Saturday planting native naupaka and other sand-happy plants whose roots will hold this precious beach together. The group has also constructed fences ensuring beach access in designated places, preventing unwarranted trampling and preventing further erosion. Now a few years into the project, they have seen success in maintaining beach sand and plants, preserving the beach at this world-renowned surf spot.

Learn more about helping out with this project by visiting northshoreland.org.

Well-known for chasing down big waves across the globe, Christensen is locally known for his off-the-grid lifestyle. From harnessing solar power and harvesting his own food, this eco-conscious family man is setting an earth-friendly example for the next generation.

Change Starts With You
What powers your refrigerator? Where does the energy that makes that light turn on come from? Most people don’t realize that the majority of our power comes from oil. How does that oil get here? It comes on ships. What happens if there was an accident and that oil spills? Be part of reducing that risk by installing solar panels and harvest energy from the sun. It’s an industry I’ve been involved in daily since 2006.

Be the Change
As surfers, we are blessed to have a constant connection to the ocean, our playground. We should be aware of anything that could adversely jeopardize that relationship. A simple start would be to avoid ‘single use plastics’ and encourage your peers to do the same. When something breaks, fix it. Don’t be afraid to wear hand-me-downs – they’re cool. Lead by example and be a steward of aloha everywhere you go.

The Time is Now
We are destroying our planet. There are people that have recognized this and are taking serious action to curb the present trajectory. Learn from them and remind yourself daily that you can be one of these people. Watch documentaries, listen to podcasts, join organizations, and volunteer. Surround yourself with like-minded people. Educate yourself and do something! We only have one Planet Earth. Do everything you can to make sure our future generations get to enjoy it the way we did. 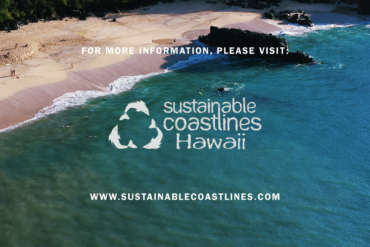 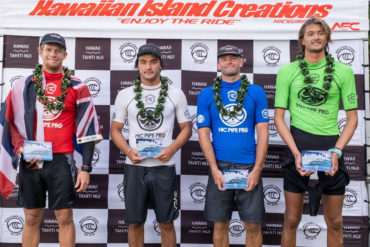