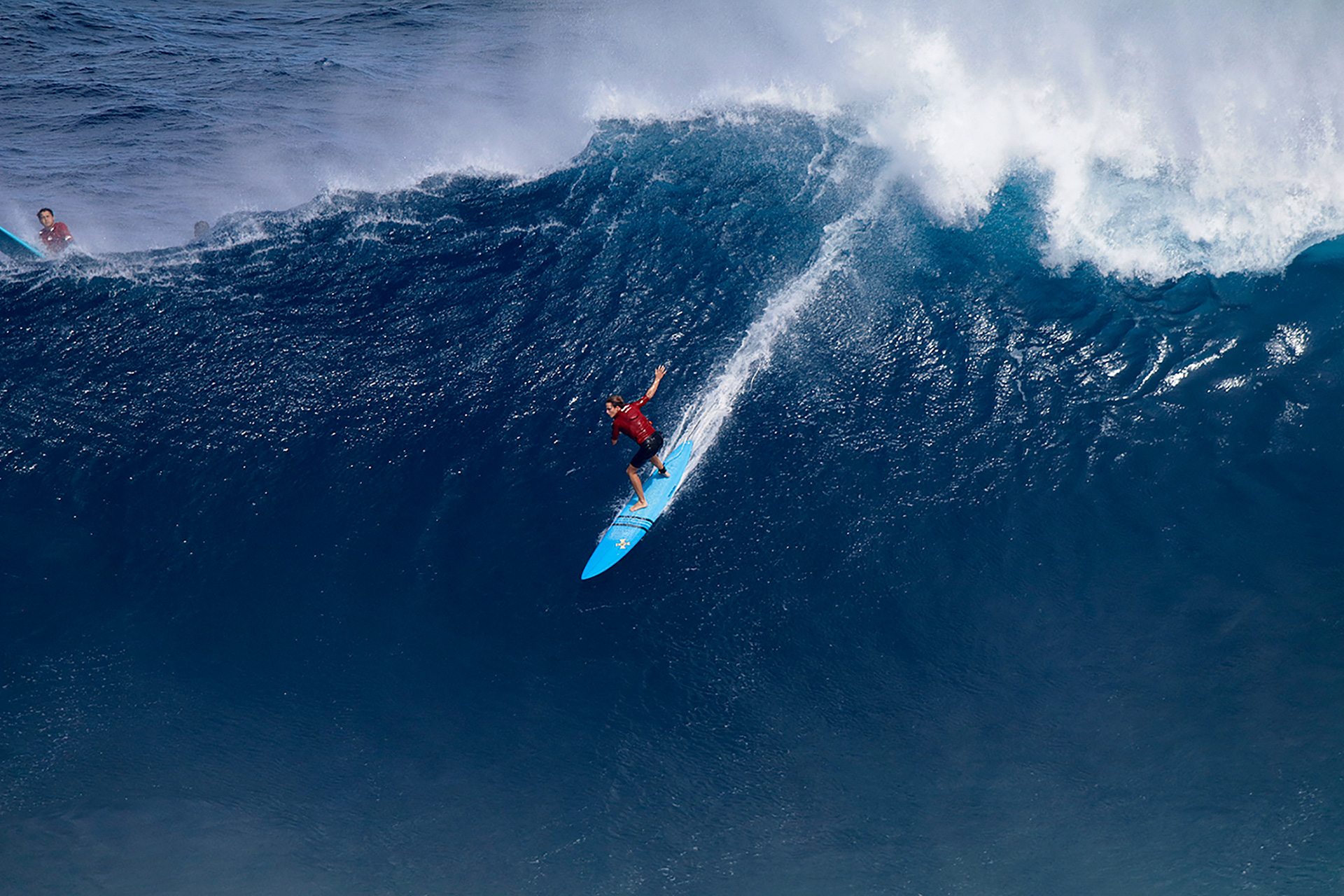 The upbringing of waterwoman Skylar Lickle would make any thrill-seeker want to move to the adventurous island of Maui. Equipped with gear for all sorts of conditions, there are no lay days for this wahine. Her early years were spent playing water polo and running track, surfing (of course), and exploring the outdoors. When she felt ready for it, her father handed her the rope to tow surf the outer reef at Sprecks, which naturally fed her hunger for paddling into bigger waves. A passion for stand-up paddle racing helped the 19-year-old learn to maneuver bigger boards, so after graduating from high school, she dedicated even more time to the big wave prowess, eventually finding herself in the ultimate lineup at Pe‘ahi.

Miss Lickle is one of many talented young athletes raised on the windy island of Maui. A lucky few were recently invited to compete in the women’s division of the Jaws Big Wave Championship and in December 2019, Lickle got her first taste of competition in the arena. This might be the first you’ve heard of Skylar, but it definitely won’t be the last. We met up with her at home in the dense jungle of Haiku to talk story and hear about how the sport is developing for female surfers such as herself, what she hopes to see for the future of women’s surfing, and why she so badly wants to ride the biggest wave of her life this season.

How were you introduced to big wave surfing?
As a young kid, my dad was out at Jaws towing every swell, so I’d be up on the cliff watching him with my mom and sister and the whole crew. I thought it looked great. Then my dad would come in and say, “That was the best day ever!” So how could I not want to surf big waves and feel that adrenaline? Since I was a baby, my dad would push me into waves. I’ve naturally excelled in bigger waves. It’s something I’ve always wanted to do and saw myself doing, I guess. I started by towing into little waves. When a big swell came, he would say, “Come on; let’s go!” And I would be like, “Okay, I guess…”
Three years ago, I finally got into paddling [them]. I got an 8’4’’ shaped by Sean [Ordonez of SOS Shapes]. It was the coolest rush ever. Instead of just getting whipped into the wave, you’re paddling and catching them yourself. You’re paddling as hard as you can to get in with this crazy rush of adrenaline. Last year, I towed a few waves at Jaws and then I paddled a few. It was pretty sick; I didn’t feel the rush I thought I would feel, however. Then, we got a good swell this past October. I don’t even remember it; everything went by so fast. When I kicked out, I started crying. It felt like this was what I have been working up to for so long, and I was so happy to finally feel like I’m succeeding in what I’ve wanted to do.

Even though the event didn’t run this year due to lack of swell, what does it mean to you to be invited to the Red Bull Queen of the Bay competition?
You have to be really respected to be invited to a big wave contest. You’ve got to have courage in order to be out there pushing yourself in order to get that spot. It’s not easy to get in. These girls are really charging and showing what they can do in order to get into these spots.
Last year I was an alternate [for Red Bull Queen of the Bay]. This year, I sent in a photo of myself surfing Pe‘ahi and they said I made it in. I thought it was so epic! I went to the opening ceremony, and it was so cool to see all the girls so psyched on this sport. This is a powerful community. There are so many girls ready to kick butt! It was a bummer that the waiting period ended so quickly [Oct 1-Nov 21]. Every day I was checking to see if there was a new swell. I want to be able to prove myself and show what I’m capable of, and I know so many other girls want that opportunity as well. This is who we are; this is what we’re here for.

It’s so impressive that you’re doing all this freshly out of high school. Big Wave Tour champions Keala Kennelly and Twiggy are more than twice your age. Who’s inspiring you to charge?
Seeing Paige [Alms] out there and the girls out these past few years made me think, “I can do that! And I want to do that!” They have been charging, and it’s so sick. I feel like I started late in my career. I was in a really rigorous school doing a sport every single season—whether it be volleyball, spring-board diving, waterpolo—and on top of that I was surfing. I didn’t have time to be going out during every swell; my mom didn’t let me skip school. So when I graduated, I took a year off to see what I could do. I got to surf my biggest waves yet, and knew that this was what I wanted to do. I’m pretty much focused on water sports: kiting when it’s windy, wind-foiling. I love to foil; I love every water sport.

How does it feel to paddle out to a scary place like Jaws alongside other wahine?
It’s so cool. I’ve gotten to know Paige pretty well throughout the years. It’s so nice to hear, “Hey Sky!” It’s great. Even being welcomed by the boys out there saying, “It’s really great to see you out here!” That’s really important to know that there are people watching out for you; that’s really important to feel in those really intense moments.

What would you like to see for the future of big wave surfing?
Last year there seemed to be a lot of hope with the Big Wave Tour. I wanted to get on that tour in a few years as my ultimate dream. It kind of sucks to hear that it’s not coming together: the funds…? I don’t know exactly what it is, but it’s sad to hear. It seems like everybody is trying, but it’s just not coming together. I’d like to see a tour with five different locations to really see who’s the best and who’s ready to charge.
I was traveling a little bit with the [APP] Stand-Up World Tour… but it would be really cool to see an organized, powerful tour [for big wave surfing], because I think it could be really exciting for people to watch.

If you could pick five spots for a Women’s Big Wave Tour, where would they be?
Five spots: Jaws, of course, because who doesn’t love Jaws? Mavericks; Puerto Escondido; Waimea; I think it would be sick to see Nazaré. A tow contest at Nazaré would be so sick; I think that would be epic.

Considering all your cross-training with multi-sport disciplines, have any fitness tips for our surfing audience?
My biggest thing is staying active. I’m so lucky to be born and raised on Maui—anything I want to do, I can go do. I could go kite right now, but I have to go to school [laughs]. I surf a lot and try to stay busy so I’m not being lazy. That’s the most important thing to me. As for food, I love everything and eat everything. I’m not going to limit myself; I’ll treat myself. I also workout with Deep2Peak and Inspiration Health about four or five days per week to stay fit.
It’s really easy to go downhill quick if you’re not on top of it. You need to be in your best possible shape at any time, because you never know when a swell is going to come. You can’t just workout hard right when you see a swell on the charts. You need to strive to stay healthy every single day, and be ready.