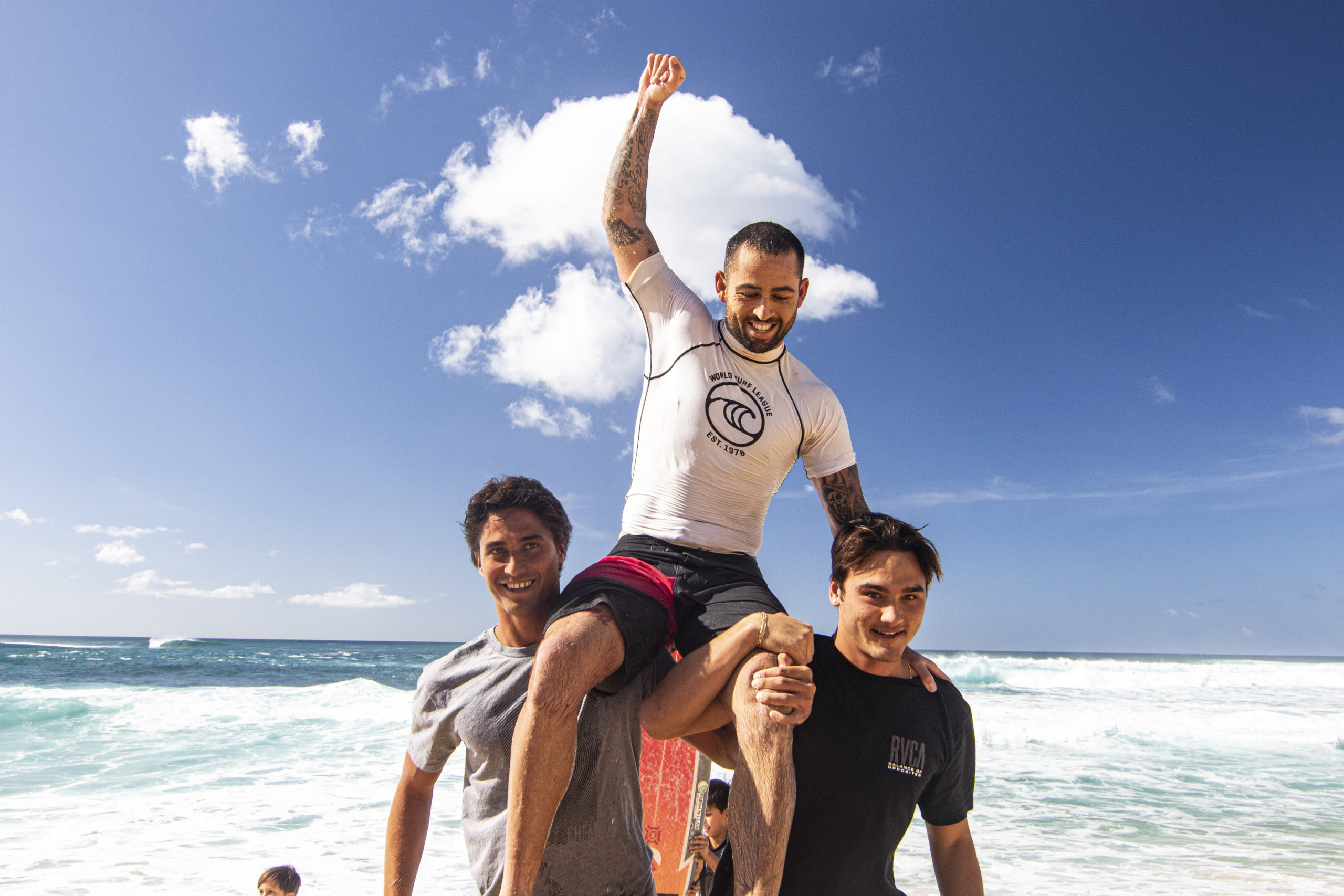 Haleiwa, Oahu/HAWAII – (Monday, January 27, 2020) – Billy Kemper (HAW) claimed his second win today at the Sunset Open, a World Surf League (WSL) Men’s Qualifying Series (QS) 1,000 and the first regional Hawaii/Tahiti Nui event of 2020, in an action-packed Final against junior surfers Kauli Vaast (PYF) and Eli Hanneman (HAW) and fellow QS veteran Koa Smith (HAW). Exalted as one of the best weeks in his life, Kemper found success at Sunset today and also at Maui’s Pe‘ahi after riding the wave of his life just three days ago.

Sunset Beach delivered pumping conditions in the eight-to-ten-foot range with wave face heights reaching 18 feet as veterans clashed with young guns during the final day of competition. Kemper was on a roll after scoring an excellent 8.50 (out of a possible 10) in the Semifinals for three powerful frontside blasts on a proper Sunset wall, then went on to tie Jackson Bunch (HAW) – eventual semifinalist and Sunset Pro Junior runner up – for the event’s high score, a near-perfect 9.50, in the Final.

It was an even split between goofy-footers and regular footers in the Final and Kauai’s Smith was the first to throw down a good score as the 35-minute heat unfolded. Utilizing priority, Smith completed two nice carves and a floater for a 7.75 but was unable to secure the backup score needed to advance past third place.

Kemper increased his scoreline with a 6.25 after dropping into a set wave off the point and nailing two good turns, but it was a throaty, deep barrel that saw him take a dominant lead and ultimately first place on the podium. The athlete drove through the hollow section of the wave and completely disappeared from view, reminiscent of his recent Jaws barrel, then threw down a turn in the critical section of the wave. His excitement was evident as he rode into the channel with an emotional claim.

“It’s such a great way to start the year, winning this event,” said Kemper. “It brings so much confidence and flow going into the new year. I feel great, I’m just so excited. It’s been a long winter and I’m over the moon right now, I’m really happy…Every win, it’s an addiction, it’s a feeling that I’ve worked really hard towards and once I got the feeling, I just kind of became obsessed with chasing that over and over. From Pipe to Sunset to Jaws, equally, they all feel amazing, it’s like a flow state you get into.”

During his post-win interview, Kemper went on to describe the influence that Kobe Bryant, basketball legend, has had on his career. Bryant died yesterday in a heartbreaking helicopter accident, which sent shock waves across the world, especially within the sports industry.

“Yesterday was really tragic for sports with Kobe Bryant,” Kemper continued. “I’ve just been someone who’s been really inspired by people who show a really hard work ethic. So much of my success I feel comes from athletes outside of surfing. They’ve motivated me to be great at what I do. In my legacy, I would love to motivate, inspire them to be great at what they do, like Kobe. Whether they’re filmers or surfers, basketball players, anything, I really want to inspire the future and I’m trying everything I can to work hard and just be a positive impact here on the North Shore.”

One positive influence Kemper has made is with fellow finalist Hanneman, 17, who he has been coaching and training with recently.

“I’ve been honored to work with Eli Hanneman the last few weeks and to see his surfing mature, the goal was to see him in the Final,” said Kemper. “To see him there was such an honor and rad to share the Final. Everyone got so many opportunities, it was such a well-surfed heat, I’m just very excited and looking forward to Pipe this week.”

Hanneman is one of the best up-and-coming athletes out of Maui, with progressive surfing and aerial maneuvers that have landed him solid results in competitions like the Red Bull Airborne Bali (third place in 2019), a win at the 2018 HYSDO Pro Junior, and a second place at the 2017 Pipe Pro Junior. The Sunset Open and Sunset Pro Junior were his first events of 2020 and he will now continue his campaign a mile down the road at the Volcom Pipe Pro, which opens on Wednesday.

Today’s runner up, Vaast, was on Kemper’s heels after displaying his own high-performance surfing throughout the competition. He climbed out of a combination situation in the Final by earning a 6.65 for perfectly timed, well-connected turns and a 7.25 with a barrel that saw him travel on his backhand. His two-wave total of a 13.90 (out of a possible 20) to Kemper’s 15.75 ultimately earned him second place, which matches his career-best result last year at the Papara Pro Open Tahiti Men’s QS 1,000.

“I’m so stoked to get another final in a QS 1,000, especially here at Sunset,” said Vaast. “Sunset is my favorite wave in Hawaii, I love the conditions, I love this spot. I really like watching Billy surf, he’s a great surfer in every condition. Having a final with him and Eli Hanneman, it’s crazy.”

Vaast, 17, has made his mark in surfing at his home break of Teahupo‘o in Tahiti, which produces some of the heaviest barrels on the planet. Last year, he demonstrated his prowess by winning the Tahiti Pro Trials and earning a slot into the Men’s Championship Tour event, the Tahiti Pro Teahupo‘o where he ended with an impressive 9th place. He has been contending the Pro Junior circuit for over five years and had an outstanding 2019 with two wins, three runner up finishes and a third place. His success took him to Taiwan this past November where he earned fifth in the World Junior Championship and yet the teen seems like he is just warming up.

“I’ve been surfing on the QS for one or two years,” Vaast continued. “I got in on the Volcom (Pipe Pro) so I’m going to keep focused and training at Pipe because it’s a hard wave too. I like Pipe but it’s kind of hard for me, it’s not like Tahiti. But I’m going to keep training and maybe get a good result too. I love Hawaii and I’m trying to come every year.”

Hanneman is one of the best up-and-coming athletes out of Maui, with progressive surfing and aerial maneuvers that have landed him solid results in competitions like the Red Bull Airborne Bali (third place in 2019), a win at the 2018 HYSDO Pro Junior, and a second place at the 2017 Pipe Pro Junior. The Sunset Open and Sunset Pro Junior were his first events of 2020 and he will now continue his campaign a mile down the road at the Volcom Pipe Pro, which opens on Wednesday.