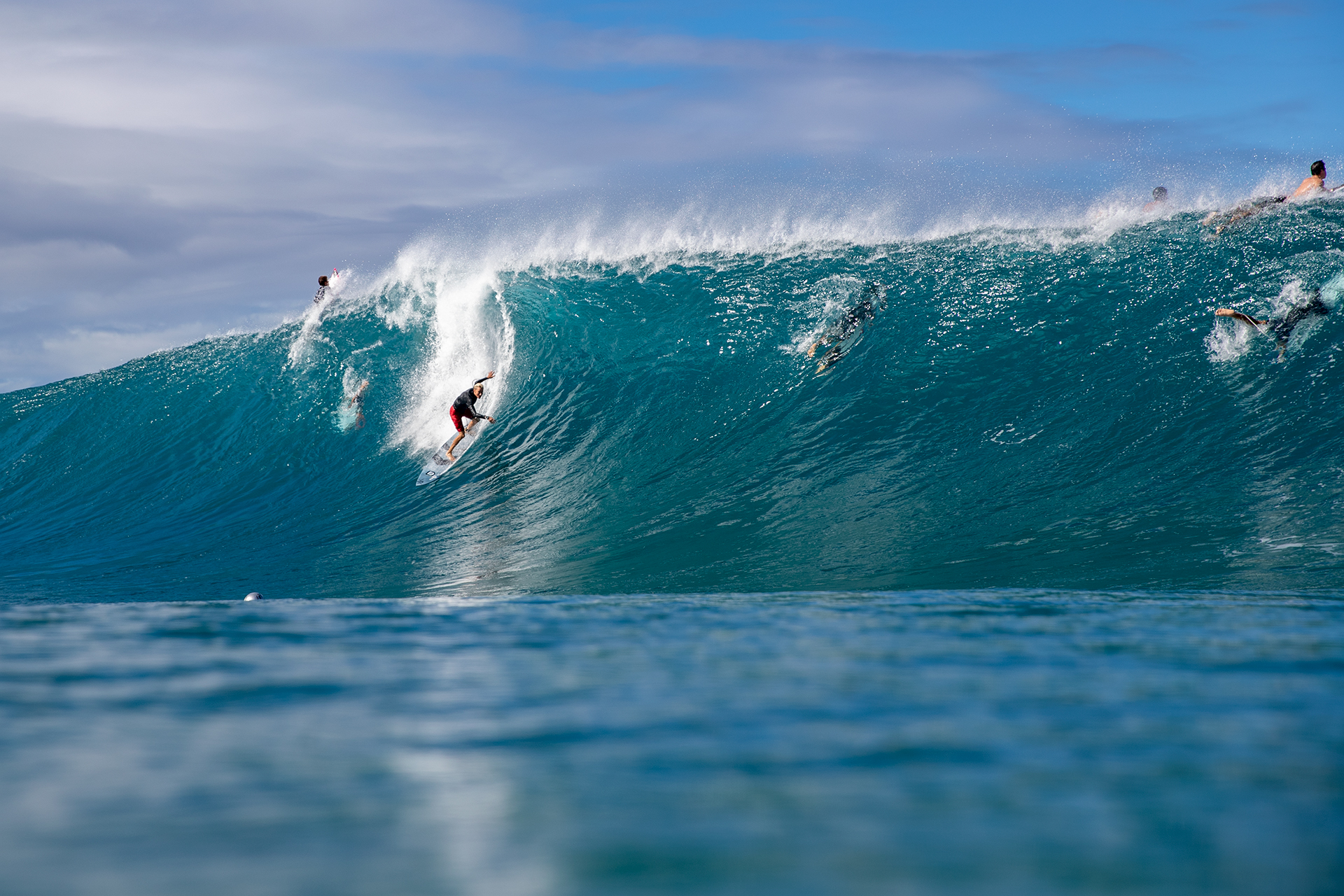 When given the opportunity, women rise to the occasion. And this winter was no exception.

Monster swells graced the North Shore for non-stop freesurf action, with little to zero distractions from school (canceled), concerts or parties (forbidden), or office work (when the “stay-at-home” order applied). The pandemic had bred the perfect storm for stacking clips, from right here at home. As you’ll see from the digital Vans Triple Crown of Surfing 2021 podium chalked full of local women, wahine in the Hawaiian Islands are setting the bar for the sport, delivering outstanding performances in waves of consequence.

The digital era of virtual events may have just saved women’s surfing. And it definitely opened more doors than ever on the female side of the coin. In an innovative stride to adapt with the times, the surf industry embraced new competitive formats, going completely digital without the need for an arena of fans on the beach clogging up Kamehameha Highway. Big time backers of the sport, like Vans and Red Bull, set their wheels in motion with virtual competitions, providing large platforms for the exposure of raw surfing talent to a global audience of fans hungry for content (also likely stuck at home and glued to their phones). Most importantly, this season the doors finally opened for more local women than ever to compete in Hawaiʻi, without the financial burdens of travel and chasing Qualifying Series points. So naturally, the ladies put on a show this season when Vans announced their inaugural digital contest trifecta, including a women’s division for the first time in nearly a decade.

In proper 2020 fashion, uncontrollable and unfortunate circumstances unfolded during the Maui Pro presented by Roxy, when a fatal shark attack to a freesurfer put the event on hold, sending the WSL scrambling to secure another location. Low and behold, the ladies ended up rerouting to Pipeline to finish their heats during the men’s Billabong Pipe Pro final rounds. The sudden venue change proved optimal for progressing the sport and furthering evidence for the theory, once again, that when given the opportunity, women rise to the occasion.

North Shore’s top talent surfed their hearts out throughout the entire VTCS four-week waiting period, which just so happened to align with the incoming storms as the islands were gifted countless swells week after week. Lay days were a thing of the past. This season, the wahine were paddling out like it was their day job. Bingo! The notorious Banzai Pipeline became the battle ground for local Oʻahu chargers like: Moana Jones, Coco Ho, Zoë McDougall, and Carissa Moore, plus Kauaʻi’s Tatiana Weston-Webb and Keala Kennelly putting themselves in the pit with nothing to lose and everything to gain.

Longtime competitor and pioneer of women’s surfing, KK has been waiting for this chance to win a VTCS title her entire career, but it seemed to only happen in Hollywood’s Blue Crush in which she played the role of a fierce competitor battling for a world title at Pipe. Thankfully, the digital VTCS opened the inaugural competition to all the local surfers, which gave space for varied approaches to the sport and diverse watercrafts. Filmmaker Leah Dawson also joined the event as a competitor, known for her retro style and single-fin dancing inspired by Rell Sunn. Surfing against the likes of 7-time world champion Stephanie Gilmore at double-overhead Sunset Beach became a reality, collectively pushing the sport of women’s surfing to new heights.

Thanks to the nature of this year’s digital competition, we got to witness amazing performances day in and day out in pumping conditions. Local knowledge of three venues seemed to be a determining factor in the VTCS overall results, as Hawai’i swept the podium: Carissa Moore (1st), Tatiana Weston-Webb (2nd), and Malia Manuel (3rd) remained after all the scores were in. Individual winners of the three venues were as follows: Moore took first at Haleʻiwa; Australian rookie Bronte Maccaulay made her mark as victor at Sunset Beach with Kauai’s Malia Manuel close behind her; and North Shore native Moana Jones became the first woman to be crowned at Pipe during the coveted Vans Triple Crown of Surfing, just narrowly defeating the three-time world champ.

The battle at Pipe amongst the girls was unprecedented, both in and out of the water, and had its share of drama and heavy wipeouts. History was in the making as the top women stepped it up at the ultimate wave and took full advantage of their shot at title glory; plus, a significant pay day on the line couldn’t hurt either. All the girls were charging this season, but it was ultimately the Hawaiian powerhouse who claimed the throne as the first-ever digital VTCS champ. If you haven’t already seen the mind-bending clips of Carissa Moore’s waves at dry-reef Backdoor Pipe, do yourself a favor and visit vanstriplecrownofsurfing.com to rewatch her performance.

Speaking of new heights, it’s been a historic big-wave season with some of the best XXL surf we’ve seen in recent years (maybe since the last Eddie Aikau Invitational in 2016) combined with pristine conditions, which made for some of the wildest Outer Reef sessions on record. Red Bull Magnitude could not have picked a better season to kick off their first-ever digital big-wave event dedicated to the women who charge massive waves in Hawaiʻi. The season-long competition offers a $40,000 prize purse to the female surfer who “showcases the most consistent and progressive big-wave rides over the course of the season.” Local chargers like Makani Adric, Keala Kennelly, and Emi Erickson made it their mission to surf the biggest waves of the season, only this time the world was watching. Some of the highlights so far include Kennelly dropping into a huge and beautiful Outer Reef session, meanwhile Erickson defended her Eddie Aikau nomination by marking her territory on the giant mountains of Waimea Bay, with late-take offs under the lip on her iconic single fin guns… Stay tuned, as a champion will be crowned this March with legends like Rochelle Ballard, Mark Healey, and Kai Lenny on the judging panel.

All in all, women have proved they can handle even the heaviest and deadliest of waves. With the 2024 Olympics scheduled to host surfing at Teahupoʻo, Tahiti (which could possibly be the inauguration of the sport into the Games depending on Tokyo’s ability to host international athletes this season), it’s more exciting than ever to be a fan of women’s surfing. Hopefully the next generation of female athletes will be inspired by what’s taking place today, and pursue their dreams without questioning gender as a limiting factor of achievement. As keiki watch their idols across a digital screen, we can curate more storytelling of women’s surfing to give it the spotlight it deserves. And with role models like Olympic Surf Team member and the digital Vans Triple Crown of Surfing champ, Carissa Moore, there’s no doubt that the future of female surfing is more empowered than ever thanks to the collective effort of a community that believes in strong wahine and encourages them to paddle out.