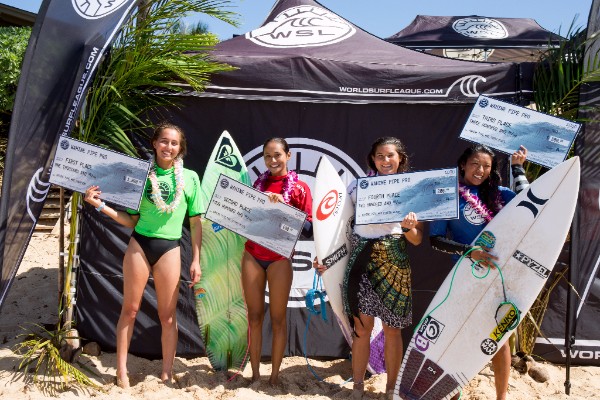 This is Harrer’s maiden QS win and rightfully so, as she charged through the Pipe barrels with confidence and scored the best wave of the event in the Quarterfinals, a 9.25 for a proper Pipe barrel on her forehand. 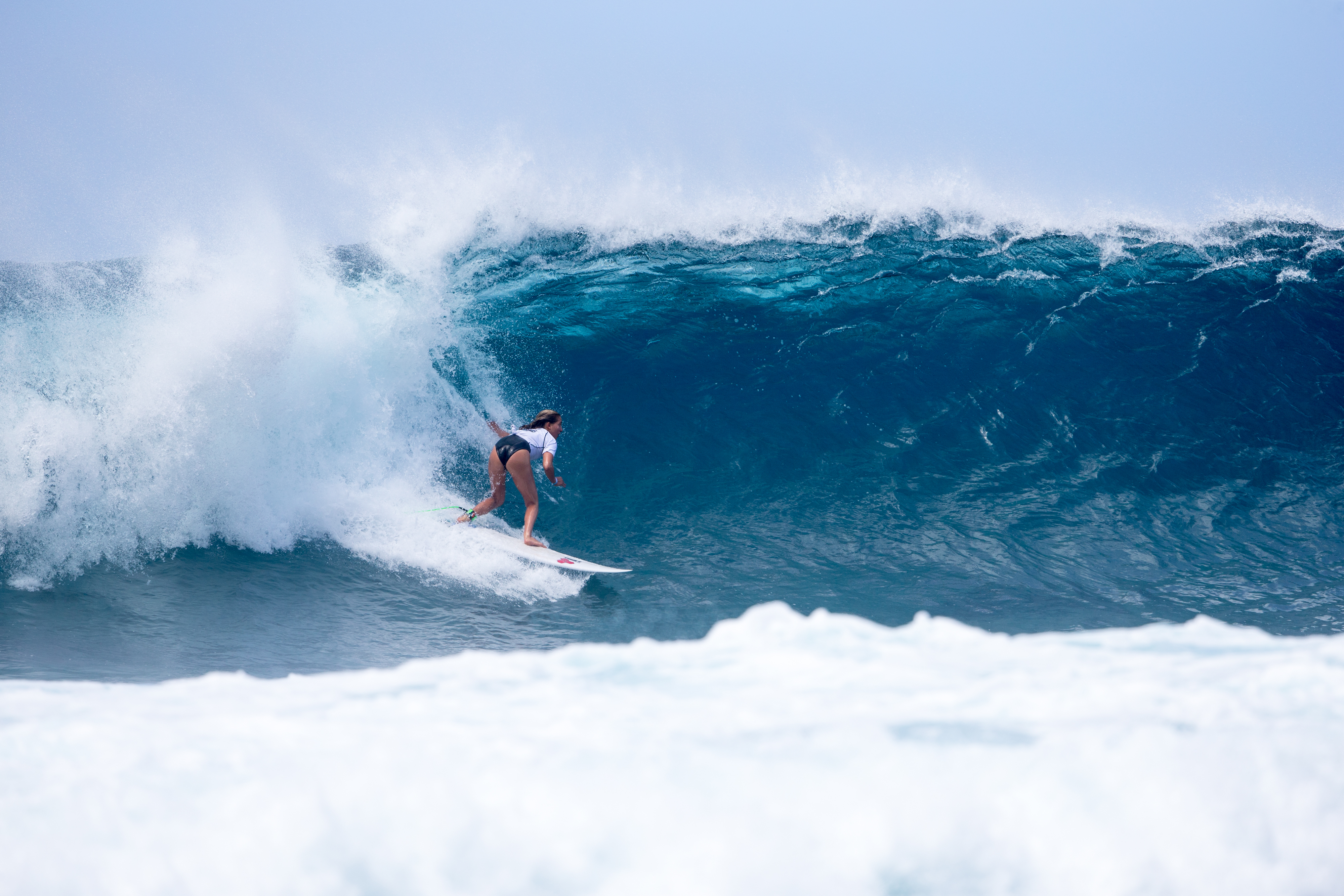 “There were so many sets I was pretty psyched,” said Harrer, 19. “I just like dropped into it and got a little barrel.” Her combined heat total for Quarterfinal 3 was 17.55, the highest of the event, and she continued to impress judges and the beach crowd with her fearless commitment all the way through the Final.

But one of the boys was there to help elevate her to the podium; Makua Rothman (HAW), Big Wave World Champion and Pipeline specialist, offered critical insight throughout each round. 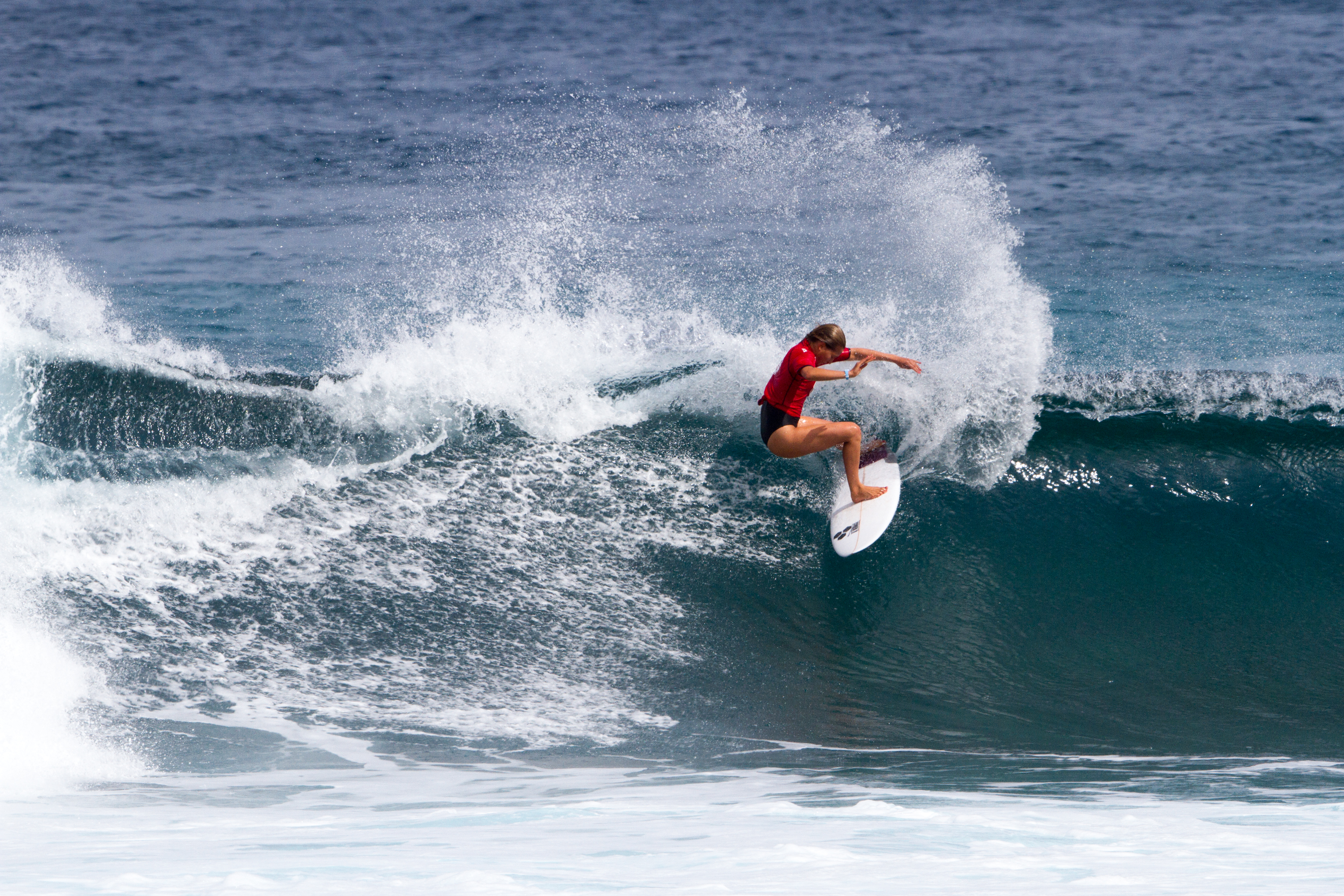 “He’s not my coach, he’s just a really good friend and said he’d help me out because he knows this spot better than anybody,” said Harrer. “He just gave me really good inside knowledge about lineups and that was pretty much all I was focusing on out there, sitting in the right spot. Because once you’re in the right spot that’s kind of all that matters out here. So I’m definitely really lucky that he was here to help me.”

Rothman cheered her on from the Volcom house all the way through the Final, when the surf went uncharacteristically quiet. But competitors were hopeful as lines appeared on the horizon and whistles pierced the air from coaches and excited onlookers. 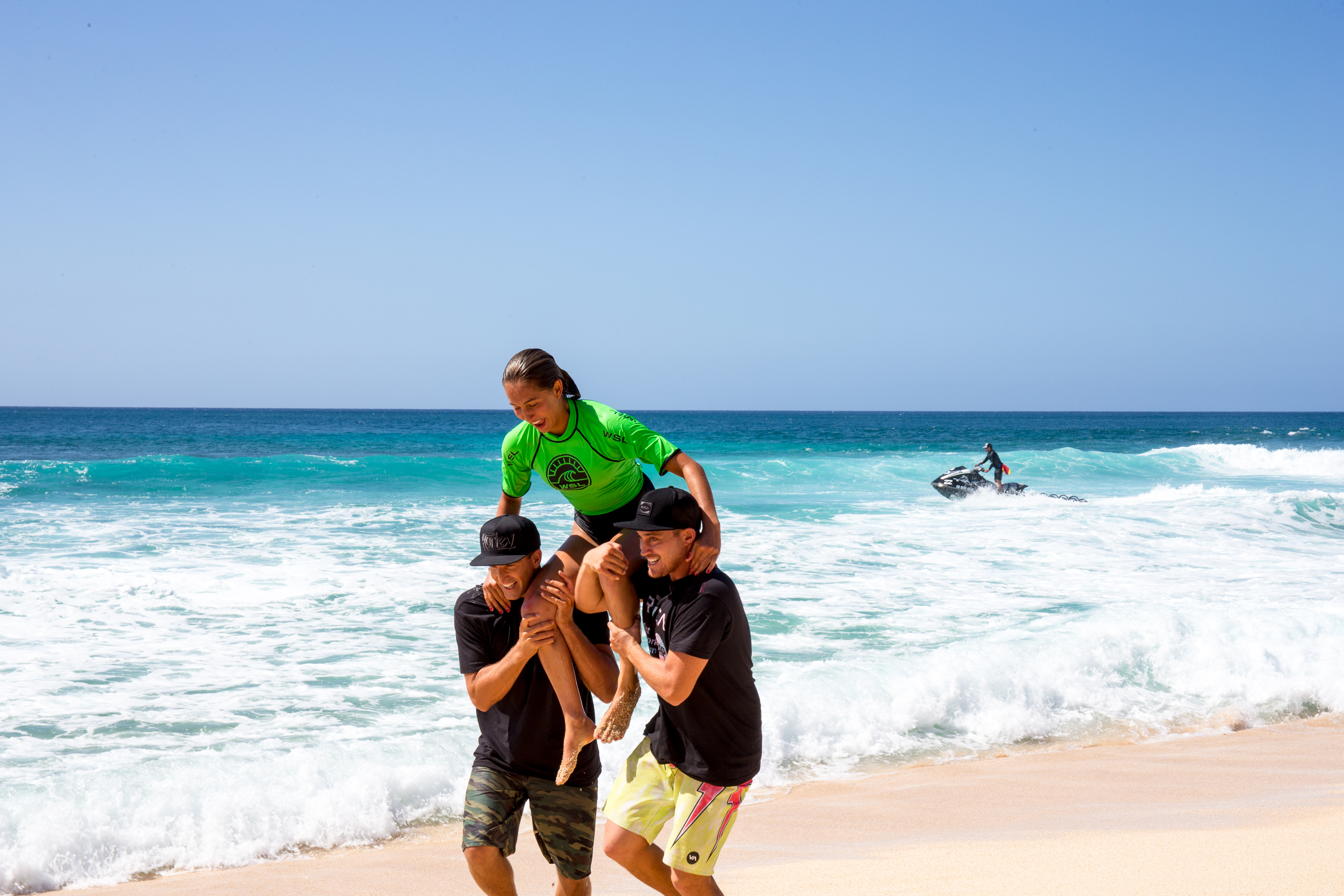 Fierro and Maeda traded waves in the first half of the heat while Harrer and Hennessy shared neutral priority and waited patiently to attack. Finally, the best set of the 30-minute heat arrived and Frankie was in perfect positioning to drop in. She pulled into a left-reeling barrel then slashed one off the top for a 7.0, which propelled her to first place.

“She waited pretty much the whole Final to get that 7 and that was our game plan,” said Rothman. “I’m a competitor, I’m not a coach and I just tried to pass along the theories that I use. One of them was at Pipeline, it’s all about the barrel. You get a nice barrel, come out and do a big carve at the end you’re going to get a good score, and that’s what she ended up doing. Today was just her day, she surfed well and I’m very proud of her and hopefully she can keep this momentum going this year and do it a couple more times.”

French Polynesia’s Fierro is on a Finals streak this week and will continue her competitive campaign in Portugal for a QS and Pro Junior event at the Caparica Pro in April. She spent the last six days on Oahu fine-tuning her skill and strategy at Pipeline, which paid off tremendously. 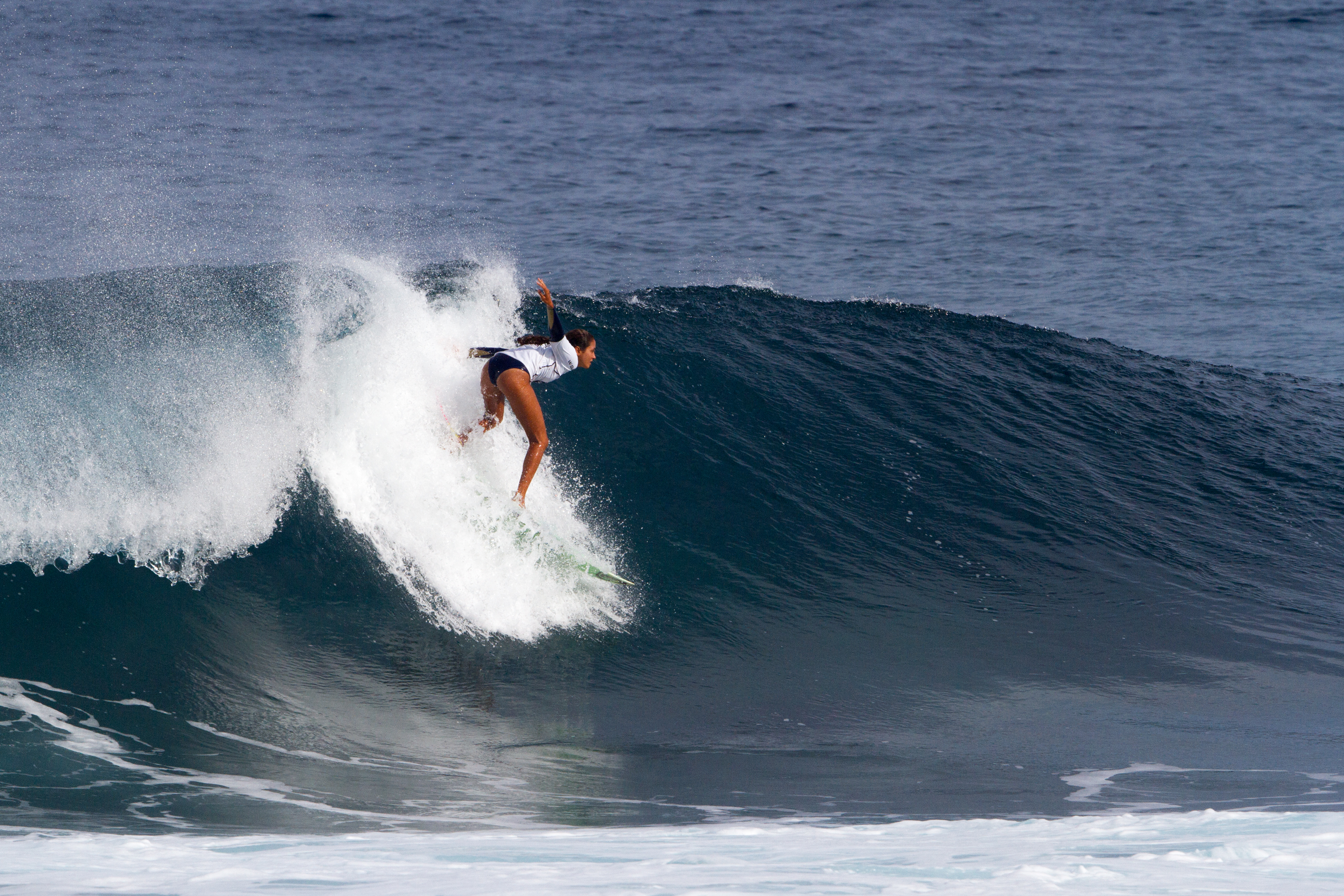 “My goal for this event was to make at least two heats, and I made it all the way to the Final so I was happy,” said Fierro. “I just kept the same game plan and I had fun out there, because Pipeline is so fun with only three people out.”

World-famous surfer and wildcard Bethany Hamilton (HAW) reiterated this sentiment despite missing out on advancement by 0.25 points in Round 1. Happy to surf Pipe with just the girls, Hamilton competed for the first time this year and went against Hennessy and Aloha Lopez (HAW) in a 25-minute heat filled with power-packed sets. 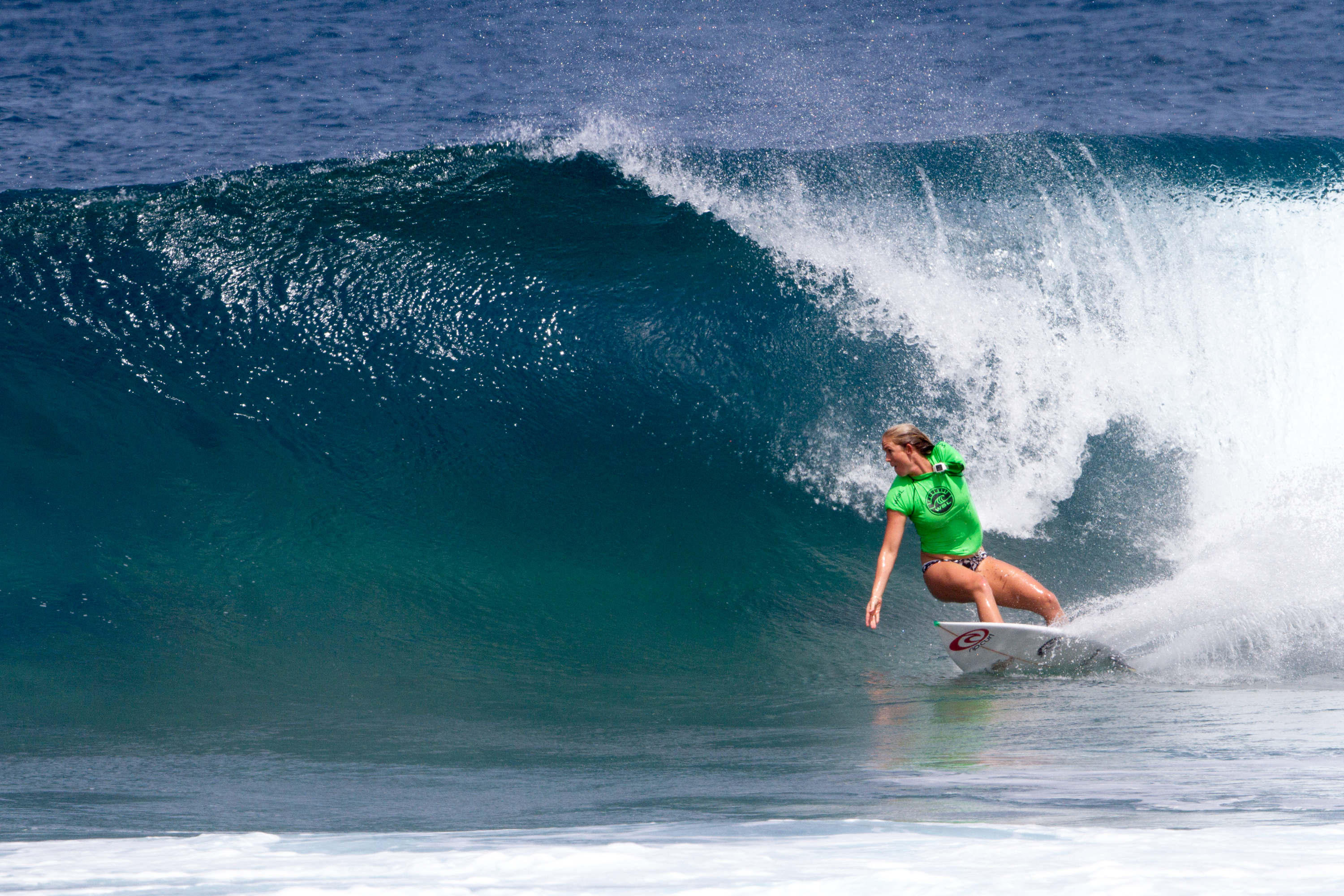 “I was so excited to be competing here,” said Hamilton. “The conditions are so nice, it’s perfect for all the girls who don’t usually get to surf here to get some experience and push themselves with no one out. I had a blast out there, I think I was a little too excited and just caught too many waves and should have just been a little more picky but it’s a good day. I’m so happy just to be surfing Pipe with no one out, it’s a great opportunity for all us women, we’re super thankful to WSL for putting on this event.”