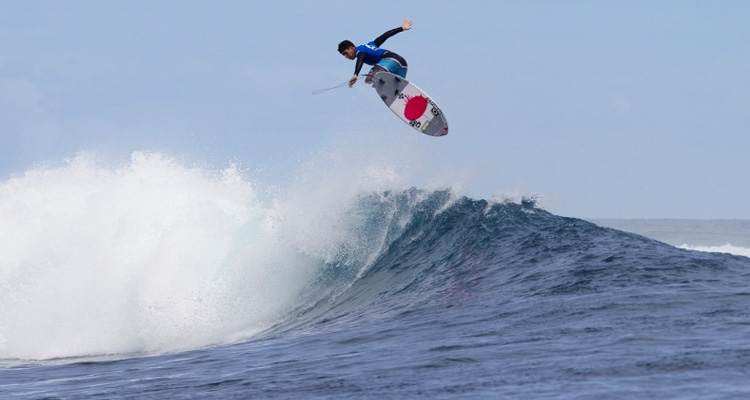 A thrilling Finals day saw Brazilian Gabriel Medina reign supreme and win the Fiji Pro, stop No. 5 of 11 on the 2014 Samsung Galaxy ASP World Championship Tour (WCT), in three-to-five foot (1 – 1.5 metre) surf at Cloudbreak. The win moves Medina back to the top of the ASP World Championship Tour Rankings after he defeated Hawaiians John John Florence and Freddy Patacchia as well as American Kolohe Andino on his way to the Final.

Gabriel Medina (BRA) won his second WCT event of the season, taking the win over 2013 Rookie of the Year Nat Young (USA) in a hard-fought final. The Brazilian got out of the gates first while Young waited 10 minutes before posting a score. Medina posted a near-perfect 9.87 for a series of barrel sections and sizzling snaps to extend his lead. Young fought back but Medina’s additional 8.53 left the American in need of two high scores for the win. Young was unable to break the combination, cementing Medina’s fourth career ASP WCT victory.

“It’s great to be back at the top of the ratings, it’s still early but I’m feeling good,” said Gabriel Medina. “I’ve never surfed at Jeffreys Bay before but I’m going home after this to prepare and I’ll be working hard. Nat (Young) is a great guy and that was a good Final against him. I was so nervous inside those barrels, I couldn’t see anything, but when I came out I was stoked. Thanks to the Namotu guys who were supporting me. Thanks to everyone in Fiji, I just love it here especially with a win.”

Nat Young (USA) posted his best result of the 2014 season today after finishing his third WCT Final as runner-up. He topped reigning three-time ASP World Champion Mick Fanning on route to the Final but, despite being on excellent form throughout the competition, wasn’t able to find the scores he needed to surpass Medina for victory.

“Third final and third runner-up finish so that’s frustrating,” said Nat Young. “I felt good. My boards felt good and I waited for a good one to start the Final with. Unfortunately, I got a little out of rhythm and Gabriel (Medina) found waves with more opportunity. He’s been surfing really well so he was always going to be hard to beat, but I felt like I had it in me. Runner-up is a good finish, my best of the year, so hopefully it’s good for the momentum heading into J-Bay and Tahiti.”

Michel Bourez (PYF) was defeated in the first Semifinal by Nat Young (USA) and secures a third-place finish moving him to No. 2 in the rankings. Both surfers got on the board quickly grabbing average scores. The first major exchange unfolded just before the 15 minute mark, with the Tahitian taking 7.33 to Young’s 6.17. The Californian built momentum, navigating a technical tube ride finished with a big frontside carve for a 7.83 and the lead over Bourez with nine minutes remaining. Bourez waited patiently to find the wave needed to surpass Young, but was unable to top the Californian up-and-comer.

“I’m really disappointed with that because I made a mistake on my second to last wave,” said Michel Bourez. “Nat (Young) is one of the guys that I thought would get a good result out here. He’s amazing and he surfs so good and I’m super happy that he ended up making the Final. I’m so pleased that I made it to the Semifinals and got another good result.”

Kolohe Andino (USA) backed up his Billabong Rio Pro runner-up finish with an equal 3rd place in the Fiji Pro after facing eventual event winner Gabriel Medina (BRA) in the second Semifinal. Medina paddled deep and it paid off early as he nabbed a fast tube ride for an early lead. Andino answered back but with less than 10 minutes on the clock Medina found a quick tube for an excellent 9.07, leaving the American in an unattainable combination situation.

“It was a good event for me,” said Kolohe Andino. “Gabriel (Medina) kind of went nuts in our Semifinal and I needed better waves. That’s okay though, I’ve had two really good results back-to-back and I’m having a lot of fun. Next event is Jeffreys Bay and it hasn’t been a WCT event since I’ve been on tour so I’m really excited to surf it.”