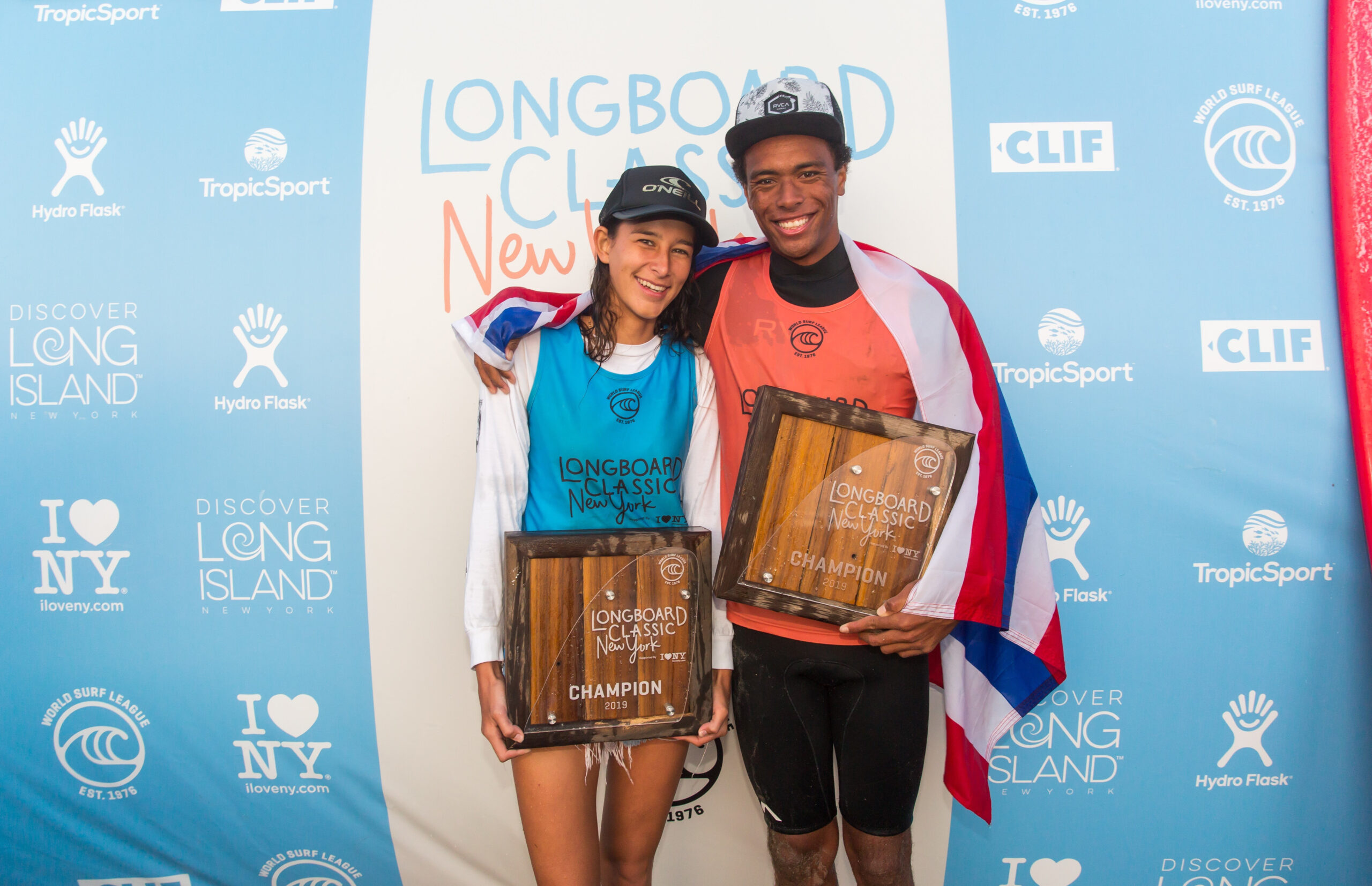 LONG BEACH, New York/USA (Tuesday, September 10, 2019) – The World Surf League (WSL) Men and Women’s Longboard Classic New York supported by I LOVE NY crowned Kaniela Stewart (HAW) and Honolua Blomfield (HAW) its respective inaugural victors on the shores of Long Beach. The Hawaiian duo put on an immaculate display throughout a hefty finals day draw that required both Stewart and Blomfield to leave everything in the water each heat. Respective runner-ups Jefson Silva (BRA) and Chloe Calmon (BRA) fell just short of their own Brasilian sweep but did their part of powering through a massive day of competition.

After an extraordinary week of performances from Stewart, the 18-year-old completed an imminent run to the podium in stunning fashion and capped it off with his first-ever WSL victory. Stewart’s 7.57 (out of a possible 10) at the 13-minute mark gave him plenty of steam to extend his lead over Silva and immediately followed it up with a 6.77 to all but secure it. Everything fell into place for one of the youngest competitors on the LT and when the final horn sounded his fellow Hawaii natives rushed to the water line to welcome him in.

“It’s so amazing to win my first event ever and just thought ‘oh my goodness, that just happened,” Stewart said. “Hopefully there’s plenty more to come and I’m just stoked right now. Jefson’s a blackbelt in surfing too and it was hard to find two good ones but I can’t believe I did. I woke up this morning and saw the waves thinking this is finals day, it’s doable. Coming up against guys like Cole (Robbins) today and it was amazing to get a nine in that heat. Then I had Steven (Sawyer) and thought ‘uh-oh, this is the World Champ.’ He’s got way more experience than me so that win was huge and this is just so amazing.”

Stewart’s near-perfect 9.07 against Cole Robbins (USA) in the Quarterfinals notched the day’s top single-wave score and heat total of 16.90 (out of a possible 20). This win moves Stewart into No. 2 on the LT ranks heading into Taiwan and now offers the opportunity for his maiden World Title race among the world’s best to cap off an incredible year.

Before Stewart took his first-career win, a third-consecutive Final between Blomfield and current No. 1 Calmon and they delivered another brilliant showdown. An early exchange put Calmon out in front with a 6.67 (out of a possible 10) but the 2017 WSL World Champion from Hawaii earned a 6.00 of her own to keep the pressure before a quick 3.67 put her out in front moments later. However, Calmon answered right back to regain the lead but not before Blomfield fired her response with the heat’s best wave of a 6.73 and held that lead until the horn sounded to claim her first win of 2019, and first victory since 2017.

“I’m feeling pretty awesome right now and you know what they say, third time’s the charm (laughs),” Blomfield said. “I was favoring this little right coming in and it seemed to be pretty consistent. I just tried to maneuver my way into some waves and somehow it worked. This is my first time riding a heavy single fin in a WSL event and so I thought it was pretty cool it was on my Two Crows board since they were the first ones to ever shape me a log when I was ten years old. I’ve just been enjoying this year and having the best time competing with my friends and hopefully I’ll keep this momentum going into Taiwan but I’m just super stoked to win here in New York so I’m just on top of the world.”

Blomfield’s finals day draw was no easy task having to take down 2015 WSL World Champion Rachael Tilly (USA) for a third time in the Semifinals this season to ensure another Final appearance. The win inches her closer to Calmon, closing the gap to just 1,500 points, before the finale in Taiwan December 1 – 7.

This marks Silva’s best result within the last eight years, never overcoming a Quarterfinal bout and now just gained 4,500 points toward the rankings to help secure a place among the Top 8 heading into next season. Silva squared off with Stewart’s fellow Hawaii native Kai Sallas before facing the East Coast’s own Tony Silvagni (USA) in the Semifinals. The seasoned veteran now preps to make complete a career-best year, now sitting at No. 4 on the ranks with competitor’s best two results of the three events counting toward their total before earning their final tally in Taiwan.

“To be in the Final is great for me and New York was great to us with a good swell even though it was tough out there today,” Silva said. “We had some good battles and all the competitors loved to be here. I’m so happy to be in the Final with Kaniela. He’s one of the best noseriders in the world and I have so much respect for him. I’m proud of myself here and now I go back home to make other boards, train hard every day, and give it my best in Taiwan. This has been a great year for me and I hope to finish in the top five.”

Calmon’s run to her third-straight Final was no easy task having to overcome dark horse Sally Cohen (HAW) in the Semifinals before taking down two-time WSL World Champion Kelia Moniz (HAW). The Brasilian’s determination and brilliant displays throughout finals day continued to show her dominance of the world’s best and remains seated at the No. 1 heading into the last event of the season once more as she did two seasons ago.

“I achieved my main goal to make another Final after the first two events and it’s always a great battle with Honolua,” Calmon said. “We’re having a pretty good year and she always brings out the best in my surfing. She’s one of the best surfers in the world and she got me at this one but I’m looking forward to Taiwan. It’s a different feeling compared to two years ago with so many events which is great for the sport. I think just by having four stops, something we’ve never had before, just takes the pressure off and I feel way more relaxed. We’ve been going through a big year and a runner-up here is not a bad result so hopefully I can carry this momentum forward.”