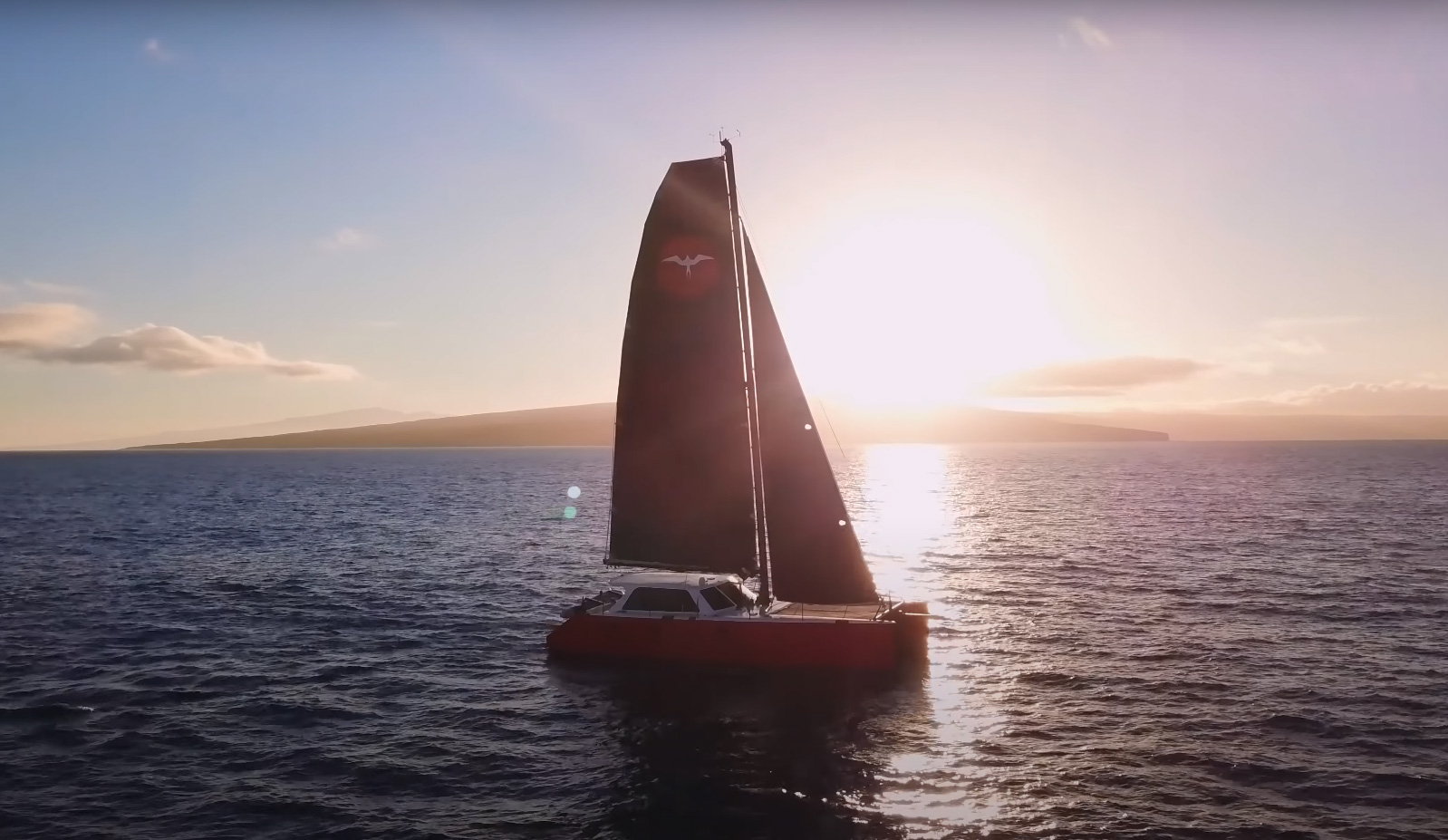 The symbolism was not lost on the group of sailors. Peering with puzzled faces into the malfunctioning engine, the scientist among them was the first to speak. “He kind of made a joke that like the ecosystem in general ‘Is kind of like the engine that you guys just broke,’” remembers environmentalist Kona Johnson, a sailor on the crew, “[A healthy environment is] a complex interaction of different layers of species, different trophic layers: it’s running well, like an engine, when there’re the proper connections between all of those different layers. It breaks when some of those connections between the different layers are severed,” Johnson says, explaining the metaphor. It had, after all, been the search for a model of environmental health that initially sparked the idea for the sail from Oʻahu to the remote Pacific atolls of Palmyra and Fanning. Johnson joined forces with childhood friends John John Florence, Nathan Florence, and Erik Knutson and together they hoisted the sails of JJF’s boat Vela, embarking on a month-long, off-the-grid blue water adventure.

After a week at sea, the crew anchored in Palmyra. Leaving their boards on the boat they met up with the island’s resident researchers from The Nature Conservancy. The boys saw first-hand the island’s native reforestation process and spent ample time underwater, scoping out the vibrancy of what is now a pristine reef. “Our sailing voyage has brought us to Palmyra Atoll,” said John John via Instagram, “We have been diving and exploring around the atoll to learn more about why the marine life, coral reef, and general ecosystem of Palmyra is continuing to thrive, even in the face of environmental pressures.” Their aim was to learn more about the former degradation and ongoing revitalization efforts of the island’s native plant and animal species – issues affecting the reefs and forests of their Oʻahu home. “Reefs are threatened by increased ocean temperatures and the phenomenon of ‘ocean acidification’ occurring,” said Johnson, “The reef and species diversity around the world are plummeting, so we went in knowing there’s a problem, not knowing so much about the complex interactions of what’s happening with coral reefs and with those systems, but just knowing there’s something that wasn’t right because of the rates of decline, and then seeing it in our backyards here,” said Johnson, citing similarities to Hawaiʻi’s delicate ecosystem, including the effects of several sunscreen chemicals on our corals and the predation of native species by nonnative species.

From the researchers the surfers learned about climate change, coral bleaching, ocean acidification, and the general impact humans are having on the island. It wasn’t all bad news though: as part of the Pacific Remote Islands Marine National Monument and now  a designated “Hope Spot” per respected marine scientist Dr. Sylvia Earle, Palmyra was the perfect destination for an environmental education. Palmyra’s past includes use as a nuclear storage testing site and as a US Naval base during WWII, which led to the littering of hazardous debris and the detriment of several of the island’s species. Now, the isle is considered to be thriving, balanced, and nearly recovered. “It’s one full, working system and you take one of those links out, the whole thing will be decimated. But because they turned it into a sanctuary, they put those links back in and the place is amazing,” said Nathan Florence, describing the flourishing natural beauty he saw on the island.

The trip was a symbol of sustainability for the other Florence aboard as well. With a break from the tour, JJF had some time to pursue his other ocean passion – sailing. Having jetted around the globe for countless surf trips, setting out on a near-zero carbon emission, wind-powered adventure, was an exciting and environmentally responsible way to travel. The sail itself was a lesson in sustainability, equal parts calculated consumption, meticulous planning and, like with that broken engine, some creative jury-rigging using what you’ve got on hand. Johnson noted, “[There was] so much learned through the sail itself…just, like, navigating that, the longest sail we ever did, the most time to have to prepare food for because we were gone for one month.” With sustainability foremost in their minds, Johnson, Knutson, and the Florences had already adjusted to the island’s “Go Slowly” motto before reaching land, a by-product of their time on the boat. “You almost have to go slower to see if you’re in a place of nourish or not,” said Johnson, “But that’s ultimately the goal of conservation work, or the work that we have as stewards of the places that we grew up in, is to do our best wherever we can to restore the broken linkages in a place that is nourishing for us and for our friends and family, and for different species as well.”

The crew then – slowly – sailed west to Fanning Island where they spent time with the locals in between surf sessions. A week later they were homeward bound, bringing with them a renewed sense of hope for a positive change in our island’s environment.

As for the engine, the boys managed to work together to get it running smoothly once more, serving as a reminder to the group that our environment can do the same. Said Johnson, “In any ecosystem or space that you can kind of see symptoms of a broken engine – which is like invasives running rampant, or coral reefs beginning to degrade, or whatever issue that doesn’t feel right – then it’s just a matter of reconnecting the linkages that had been broken and once those linkages are connected, then the engine can run and the ecosystem can thrive again.”