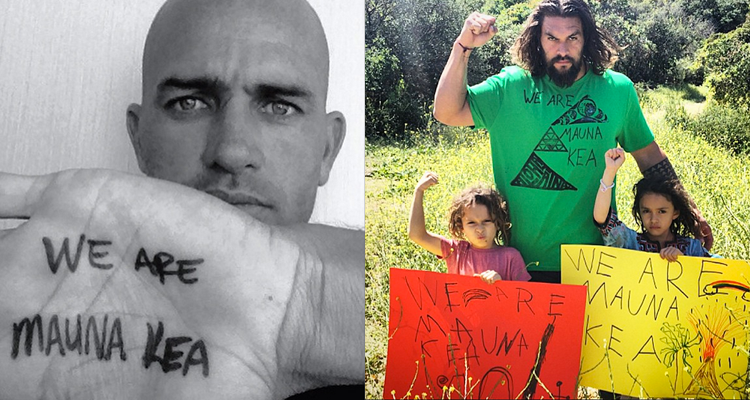 With temporary construction of the postponed for a week the protest expands internationally through social media. Jason Momoa, Kelly Slater, Nicole Scherzinger, and others keep the cause alive online utilizing the tag #wearemaunakea . Next week, when construction begins and also the protests, the outcome remains unknown. The halt of construction comes during Hilo’s Merrie Monarch Festival. The largest gathering of native Hawaiians annually.

“They have responded to my request and on behalf of the president of the University and the Office of Hawaiian Affairs have agreed to a time out on the project, and there will be no construction activities this week,” Ige said at a news conference.

Everyone unite for the world wide sign waving event happening right now.  Let’s show the world that #WeAreMaunaKea. @protectmaunakea We are ohana Aloha j and L

#WeAreMaunaKea updated post. There's a battle going on between the will of the people and power of money/influence/scientific research on #TheBigIsland of Hawaii. #MaunaKea is a sacred place for Hawaiians, the world's biggest mountain when seen from the ocean floor. The history of what's happened to the land and indigenous people of Hawaii is a well-known, long-fought battle. The newly planned telescope is seen as a continued desecration of that land and culture by many who love this place. Concerned citizens and native Hawaiians are worried that burial grounds and other sacred venues along with the underground, freshwater aquifers will be damaged or altogether forgotten about in the crossfire. There is also a concern that the same thing could happen in Hawaii as in Chile where a huge number of telescopes became obsolete and were shutdown due to the changes/advancements in technology causing job loss at unused sites. On the other side of the equation, Mauna Kea is thought of as a perfect vantage point for astronomy because of its geographic location (high altitude, low moisture and light interference). Due to the unstable, rocky ground, there's a need to build deep into the top of the mountain for stability which will be done with drilling, not dynamite as previously thought. Although occasionally some telescopes have run out of long-term funding, #TMT is expected to be at the forefront of scientific research for as many as 50 years. So what's the answer? Is there a happy medium? Will the building be postponed? Is there a previous site that can be used or a better site elsewhere on earth with even less atmospheric disturbance than seen at Mauna Kea? With enough signatures this project may come to a halt. Link above. #Mahalo #MalamaKaAina