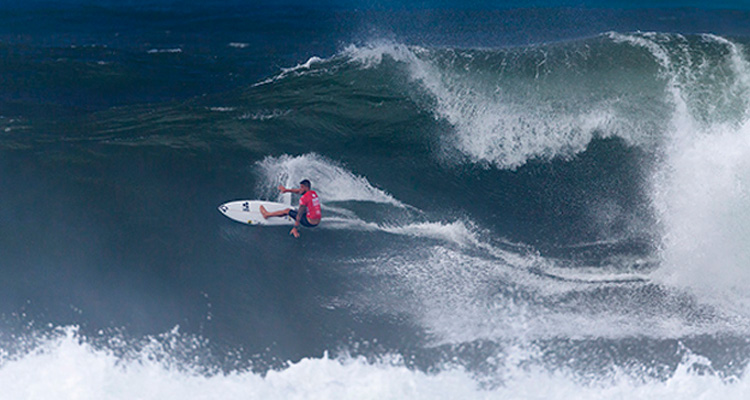 Vans Triple Crown of Surfing kicks off in massive surf

Huge waves of up to 25 feet delivered a dramatic start to the REEF Hawaiian Pro at Haleiwa today as surfers from around the world took to the water to compete more against the ocean than each other. The contest is the penultimate event on the ASP Qualifying Series and marks the first stage of the Vans Triple Crown of Surfing. The opening day of the competition was one for Hawaii to celebrate, with the many of the heats being dominated by local surfers as the event ran through 12 heats of Round 1.

Leading the charge was 20-year-old Ezekiel Lau (HAW), who harnessed the power of the enormous waves to produce the highest heat score of the day: 18.53 points out of a possible 20. Lau was a man on a mission, landing huge drops, riding a gaping barrel and carving up towering walls of water to take a convincing win.

“I didn’t get to practice this morning so I had to gauge how big it was and what was going on out there,” said Lau, who scored his first major victory at Sunset Beach last year during the Vans Triple Crown.

“At first I started off slow, I just wanted to feel it out. But then I was like, ‘alright, let’s do this! Let’s sit outside, get a bomb and make this happen’. When I get ready to surf in Hawaii I watch the old school videos of Sunny (Garcia), Andy and Bruce (Irons) and Kelly (Slater) out here. It’s ridiculous. They had these huge boards and would throw them around in huge waves, and that was my inspiration growing up. For me, coming home is about going back to the basics and having fun. It feels great to be home and performing in front of my family and represent Hawaii.”

Today’s top five highest single-wave scores and top four heat totals were posted by locals, among them Billy Kemper, Pancho Sullivan, Olamana Eleogram, Jamie O’Brien and Lau. Sadly for Eleogram, a priority interference meant that even a Perfect 10 for a cavernous barrel couldn’t save him and he was eliminated from the competition.

The Brazilians also performed well today, starting out with Krystian Kymerson (BRA). He survived a particularly brutal morning heat that was stormed by rogue close-out sets and a raging rip current. While his heat score wasn’t one of the day’s highest, surviving both the conditions and six-time Vans Triple Crown champion Sunny Garcia was reward enough. Both Kymerson and Garcia advanced out of the heat.

“The waves are really big and it’s very difficult to position yourself,” saidKymerson. “Having Sunny (Garcia) out there… he is like an idol for me and it was very nice to surf with him. I’ve always looked up to him growing up surfing and I’m just happy to make my heat and make it to the next round.”

Popular Australian Brent Dorrington (Gold Coast) is familiar with charging in large surf and was well suited to today’s conditions. He survived to advance ahead of Hawaii’s Dusty Payne and Danny Fuller, and American Kanoa Igarashi. On the verge of qualification, Dorrington is eager to secure two solid finishes here at the Triple Crown.

Event organizers anticipate a slight drop in wave heights tomorrow, topping out at around 15 feet (wave faces), and excellent conditions that could see competition continue. The next call with be made at 7:45 a.m. local time on Thursday, November 13.