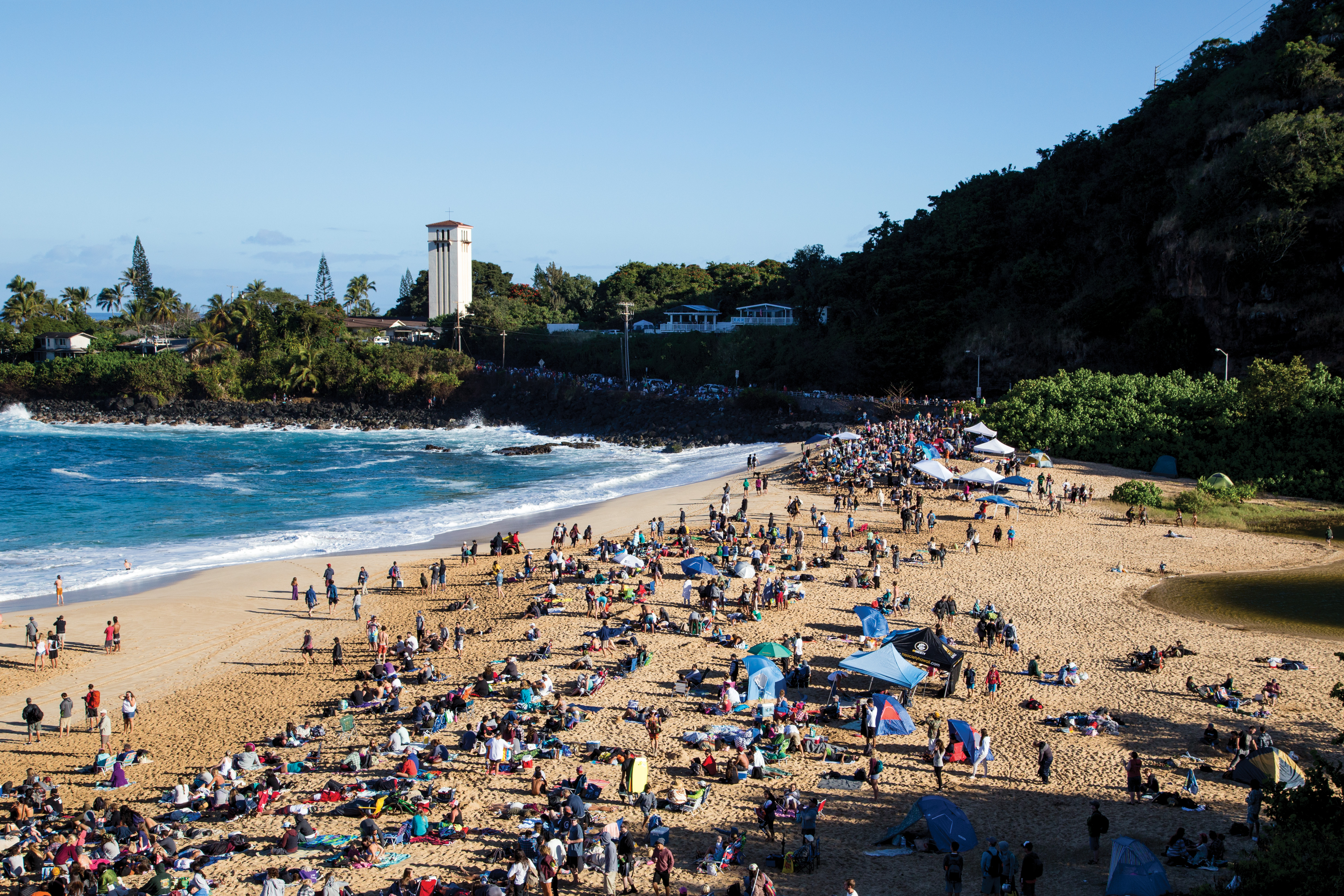 Why The Eddie Didn’t Go

The surf community went to sleep last night completely expecting to see the Quiksilver In Memory of Eddie Aikau contest go today, an event that hasn’t run since 2009.

Over the weekend, Quiksilver gave the contest a yellow alert, and by Monday the event had a   radiant green light. Thus, media and executives and pro surfers alike booked last minute flights, construction crews began creating scaffolding at Waimea Bay, community law enforcement began preparing for a crowd in the tens of thousands, and members of the North Shore tribe collected tents and sleeping bags and overnight snacks.

The hype and preparation was completely justified: it’s been 7 years since the last Quiksilver In Memory of Eddie Aikau ran, and on tap would be (forecasted) 20+ foot consistent swell, and surfing’s biggest names (Slater! Dorian! Carroll! McNamara! Irons!) all competing for glory, for prestige, for a name in the history books and in the name of Eddie Aikau, the North Shore’s first lifeguard who lost his life in an effort to rescue fellow crewmates about the Hokule’a, a Polynesian voyaging canoe that capsized en route to Tahiti.

Thus, thousands prepared and arrived before daybreak in bubbling and throbbing anticipation. But the contest never ran.

“This morning at 3 am, I read the buoys and said ‘where’d it go?’” said Glen Moncata, Quiksilver’s Event Director while standing in front of the skeleton event scaffolding. “I think it was mother nature that got us. You had everyone saying it’s going to come in earlier for a 9 am start and when I got up at 3 am and read the buoys, I said ‘where is it?’ I thought the buoys were broken. After talking to a couple guys, the storm had so much intensity ahead of it, once it got to our island it got sucked into a high pressure system. What we need is eight hours of solid 20 foot surf, 40 foot faces, and unfortunately this storm got pushed way up North of us.”

This certainly isn’t the first and won’t be the last time expectations for The Eddie were high and wave heights were low. “In 31 years, the contest has gone 8.5 times,” continued Moncata. “I’ve had over 30 dry runs. It’s disappointing. We have a standard for this contest, if it’s not Eddie size we’re not comprising, just like Eddie wouldn’t have.”

The no-go call was indeed, disappointing, but once the news spread throughout the crowd on the sand, on the cliff and spilling out in the streets, the mood didn’t plunge into frustration or anger. Instead, a community-get-together-party-like feeling became palpable.

The scene resembled a hybrid between the Las Vegas strip on New Year’s Eve and a Woodstock event. Multiple tents dotted the cliff, where an overwhelming amount of the audience slept in order to preserve seats during the anticipated action. Acting as a row of food trucks, many tents around the 7 am hour were already grilling. One in particular had a shirt draped over the railing with an inscription “DRINKS $3, Cheeseburgers $5”. Tables even displayed trinkets (like iPhone cases) for sale. Tow trucks patrolled the cliff and the Bay, as hoards of people wearing pajamas and a morning look continually swarmed into the streets, making the already gridlocked Kamehameha Highway impassable.

“When we first started this contest, it was a celebration of Eddie,” said Moncata. “It wasn’t about a contest. It was a dedication and memorial to a great Hawaiian. George Downing always said the contest is the icing on the cake, it’s not the most important thing. The most important thing is keeping Eddie’s name. And if the contest goes it’s great, if it doesn’t go…One thing about this contest is that we’re not going to lower our standards. Like I said, it has to be Eddie quality waves on an Eddie quality day. We’re not going to change our philosophy on the contest, we’re going to keep it the same way: it has to be 20 feet, for 6 hours.”

For acclaimed big wave surfer Ramon Navarro, seen coming out of the lineup and trudging through the deep and prestigious sand, there’s too much respect involved to be frustrated.

“I received the call, last minute and flew here from Chile around 4 pm yesterday,” he said. “To be invited to Eddie for me is one of the biggest goals of my life, its the biggest honor of my whole life. To celebrate Eddie’s life, to meet Clyde Aikau, I’m humbled how they have so much contact with the ocean and this place. It makes me proud to be here and to be part of this. We could do this thing 100 times in the winter. I’m just proud to be here.”

The window for Quiksilver’s In Memory of Eddie Aikau ends on February 29, 2016, so there is still enough time for another green light, and perhaps another dry run. “It’s an active year because of the El Nino,” said Moncata, “and we have another storm coming next week that we’re tracking.”