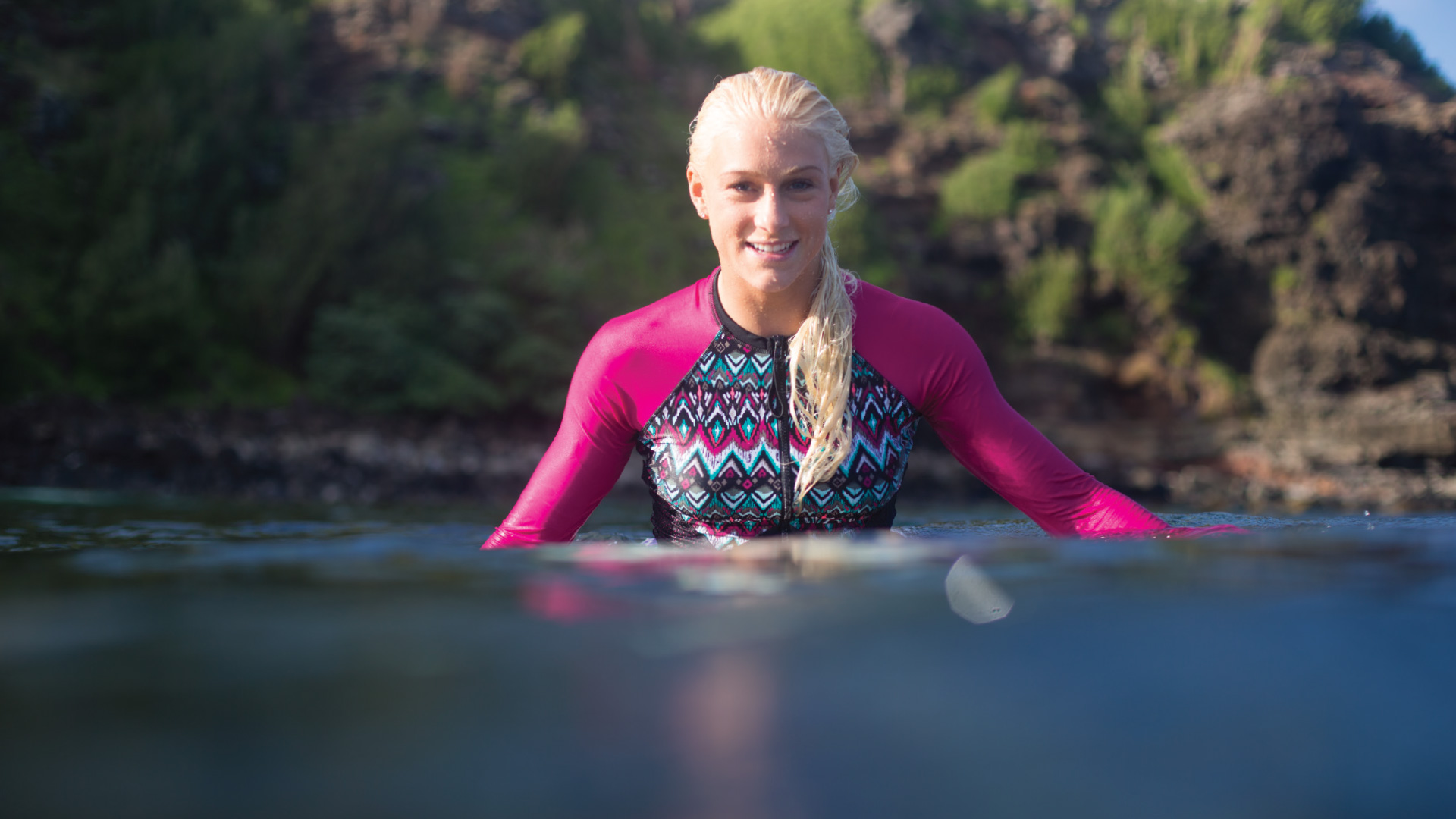 You have dual citizenship with the US and Brazil — who would you surf for in the 2020 Olympics?

If I was surfing for Brazil, I’d have to switch my flag sooner than later. I’d really love to surf for America because I was raised here and it’s what made me a surfer. It’s a really complicated question because I really feel half-and-half.

The WSL recognizes the Hawaiian flag, but in the Olympics you’d surf under the US flag. What do you think about that distinction?

I think women deserve every inch and centimeter of the recognition that they’re getting now because of the fact that we’ve pushed ourselves beyond the limits of how women’s surfing has been. We’ve advanced it to a different level and I think it’s motivated both men and women alike. Women have made an amazing statement and women’s surfing will only get better from here. It’s really fun to be a part of this level of surfing right now.

Who was your first sponsor?

My first sponsor was Roxy. Body Glove is my most recent and biggest sponsor along with Rockstar and Smith Optics. I’d say they’re the top three.

There is a model aspect with sponsorships, and Malia Manuel has said she loves that fashion side of the job. Do you as well?

Honestly I’m a big fan of turning athletes into models because I do think they deserve the recognition. I love the fact that they chose me because it feels like more of an honor. It’s like they recognize that I’m more than just an athlete — I’m an all around person. In the marketing aspect that makes me feel bigger and I’m really thankful for that.

You obviously take really good care of your body, but what’s your favorite guilty pleasure food?

Ice cream, for sure. I’m a huge fan of ice cream.

What are the gnarliest conditions you’ve ever surfed in?

I remember there was one year at Sunset in a junior pro. I caught one wave in the final and the whole rest of the heat I was just getting pounded. That was the worst…EVER. I was on the bottom of Sunset. I just remember getting so drilled and thinking, ‘This is for sure the worst heat of my life.’ I was maybe 16 getting beaten by all the younger surfers.

What is the biggest difference for you between this year and your rookie year?

Honestly I still feel like I’m a rookie. These last two years have just zoomed by — I’m still learning so much day by day. I think the biggest difference is the experience that I’ve gotten throughout surfing the heats in the first year, learning what my strengths and weaknesses are and learning how to push competitors buttons and make them a little frustrated, just little tactical heat strategies.

What are you favorite Hawaii breaks?

I love Pipe, but it’s kind of hard to get that without a lot of people out and I think it’s really dangerous when it is really crowded. Basically the whole Seven Mile Miracle, it’s just amazing over there. I’m not going to talk much about Kauai because…

It seems like everyone is visiting Kauai right now. As a local on an island that’s only 20% inhabited, how does that make you feel?

It’s pretty crazy. You really can’t keep tourism away from such a beautiful place and I think a lot of the tourists are actually not surfers, which is a good thing. We just don’t want Kauai to turn into a Lowers kind of place. We want to keep the respect in the water and enjoy each other’s company instead of having a really hectic session and being yelled at and dropping in. We just don’t want any of the negativity over there.

Who are the competitors you get most stoked or most nervous to pull in a heat draw?

What’s your favorite non-surfing sport to watch and do you have a favorite team of that sport?

Favorite sport is probably tennis. I love watching tennis because of my mom and I like watching football because of my dad, and basketball. I love Kobe Bryant, Steph Curry, Cam Newton…I love [Belarusian tennis player Victoria] Azarenka. I love Serena Williams, I love Michael Phelps. I’m a huge fan of all sports, and I would watch whatever comes my way. I’m a huge fan of gymnastics too, so I really like Aly Raisman and Gabbie Douglas and Simone Biles.

I love snorkeling, and I love going on my dad’s boat. They go fishing — I’m not a big fisherwoman but I love being on the boat with my dad and brother. It makes everyone bond and it’s a fun time.

If you weren’t a pro surfer, what would you be?

I would probably be in school studying my butt off to be…I think maybe I would be an interior designer or a doctor or something.

If there were 48 hours in a day instead of 24, how would you fill the extra time?

Probably another surf session, and I would definitely have some classes to study.

The culture and how much I feel like it’s home away from home. I feel really blessed to be able to go there and spend time with my family and eat good food and catch good waves.

Where is your mom’s family from?

I was born in Puerto Allegre. That’s where my mom and my grandma were raised.

What cracks you up every time?

There’s this Instagram called #localmaddas and she is just great. Her Instagram is @wenpash. Every time my boyfriend and I watch that we crack up, it’s just great.

What’s the most important thing to you with regard to fitness?

For me the most important part of conditioning is being able to prevent injuries and be really ready for whatever is going to come your way. For me, that’s a lot of cardio and long surf sessions.

You’re doing great on the ‘CT, but still take advantage of getting points on the ‘QS. Do you think there will be a time where you’ll just focus on the ‘CT?

For sure. The ‘QS does take a lot from you and it’s a lot more traveling. My goal in the future is to not really need to worry about ‘QS [events], but for the time being I still do waiver in my surfing and I’m not the best yet, so I just want to back myself up as best as possible.