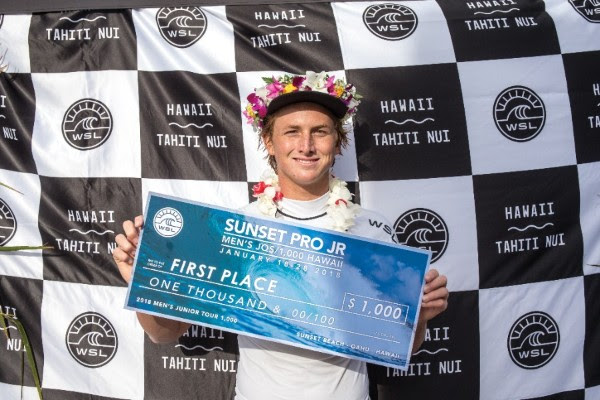 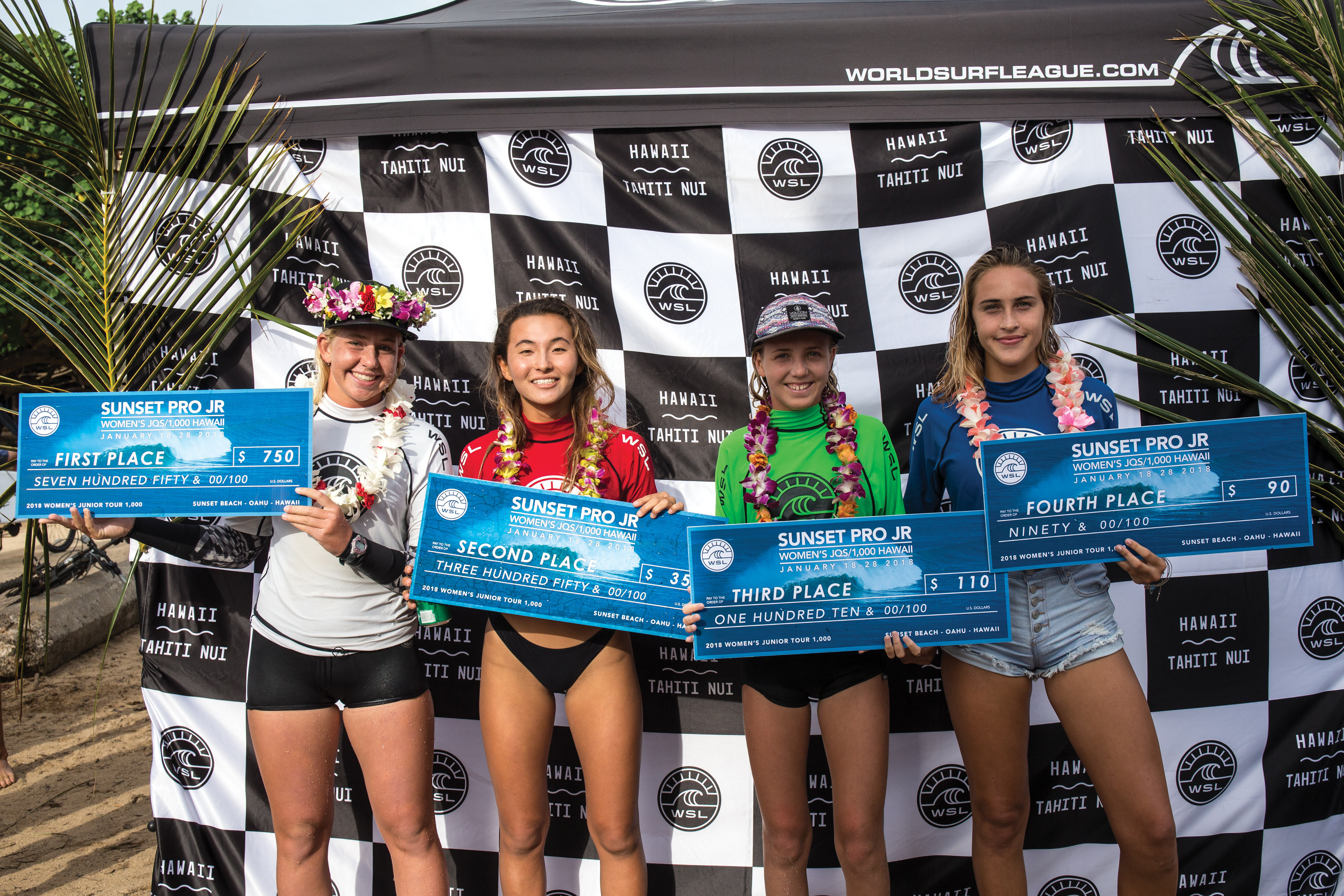 “I’m super happy, this has been one of my goals for a while now, to win a Pro Junior, and for it to be at Sunset is just amazing,” said Bryan after the awards presentation. “The waves were pretty good all day, a little tricky, but to come out on top feels really good.”

Bryan stayed patient and charged when it mattered most, dropping into overhead surf and committing on the biggest waves of the heat. Her first keeper score, a 5.0 (out of a possible 10), shot her to the lead ahead of Tomoda-Bannert and she was able to stave off competitors after posting a 6.15 on her last ride. The two Kauai girls battled for first and Tomoda-Bannert fought back with a 6.30 on her final wave, but it wasn’t enough to overtake the combined 11.15 points Bryan had in her score line. 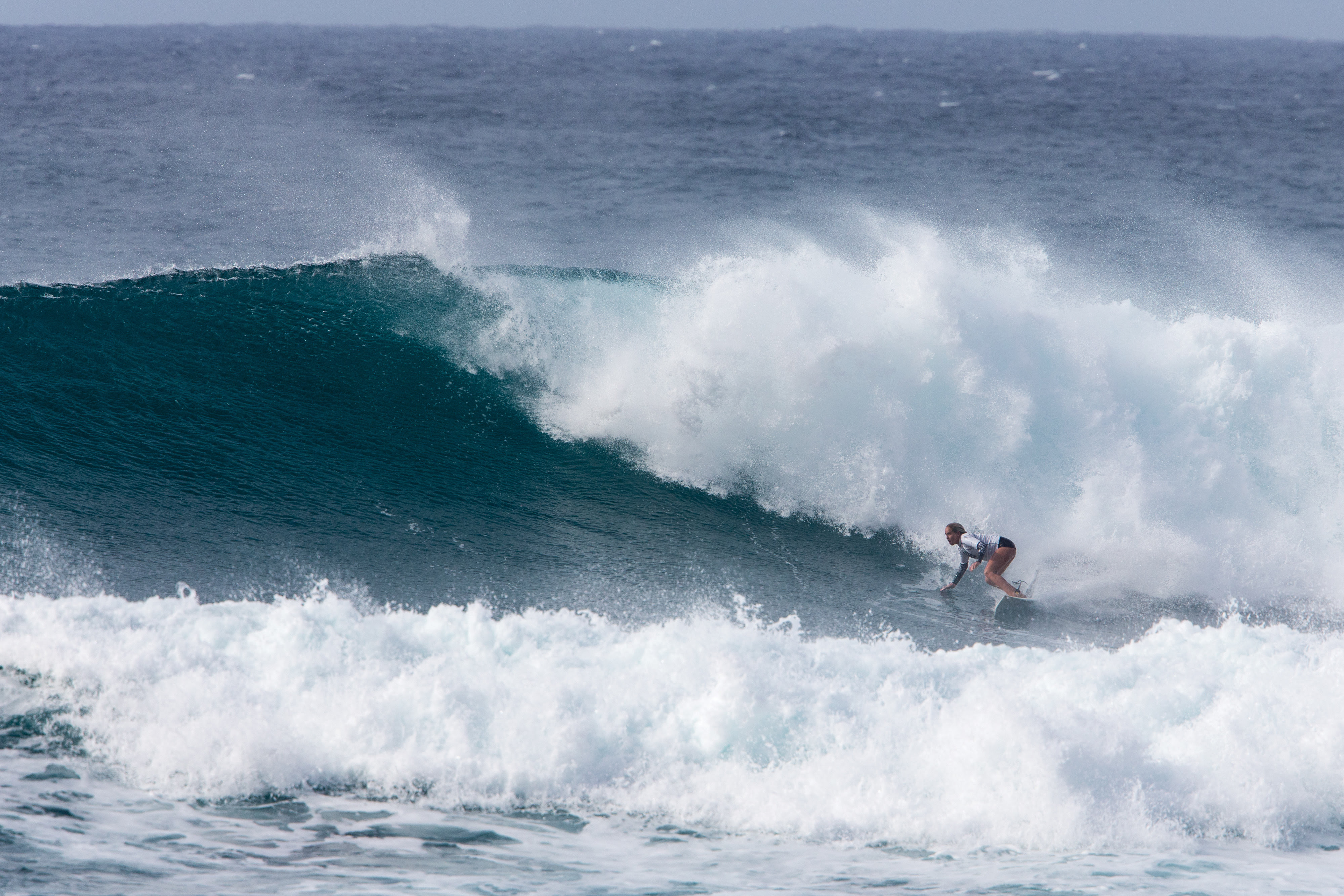 To be noted, Tomoda-Bannert posted the best wave of the Women’s division, an 8.75 in the second Quarterfinal, after a few technical turns on a set wave. This excellent score put her in rhythm for the rest of the competition and ultimately saw her earn a respectable second place result.

“The girls have been ripping every single heat,” continued Bryan. “The waves were kind of slowing down, and they’ve been changing all day, so I knew that if I waited and got the right waves and I performed, I could win.” 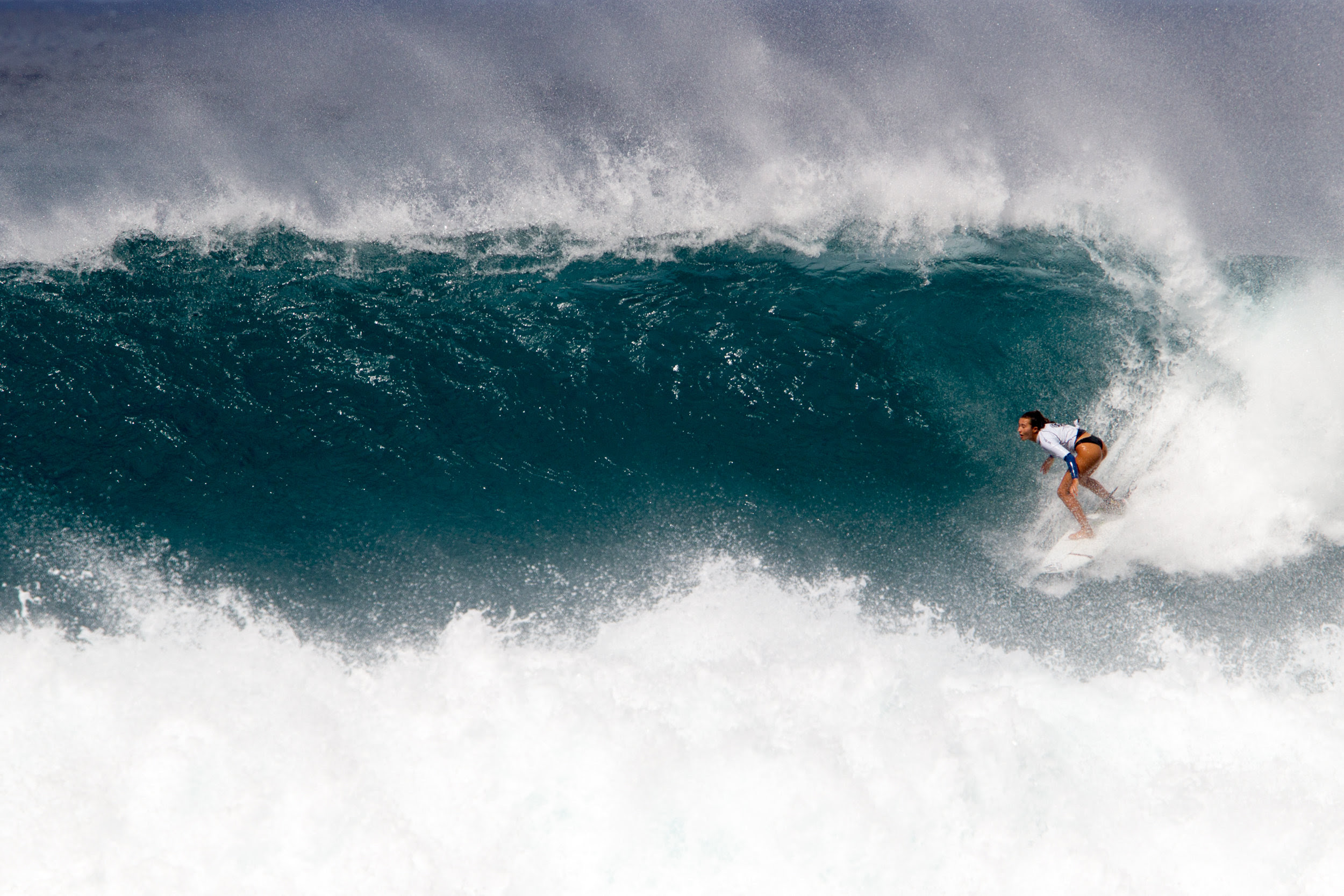 Tomoda-Bannert was an event standout and attacked Sunset with poise and confidence. Image: WSL/Freesurf/Keoki

Ahead of high school graduation in July, Bryan will be traveling to Australia to compete in a couple of Qualifying Series (QS) events, then to Tahiti for the regional Pro Junior and QS. “I really want to win the Junior title,” she continued. “And on the QS, I want to be high enough to get a good seed into the higher QS6,000’s so this is a really good step at achieving my goal and I’m just going to keep working hard.”

In the Men’s Final, defending event winner Mamiya opened strong on his forehand and secured a 6.5 by linking together strong maneuvers, but McGill’s opening ride, a 9.0, changed the guard and saw the World Junior Champ jump to first.

“My 9 in the Final felt really nice because that section was really gnarly and I kind of just put it up there just to put it up there,” McGill commented after the awards presentation. “I mean it’s the Final, you kind of have to put it up there, and the wave ended up throwing me right back out and I made it, pretty weird but I’m stoked.” 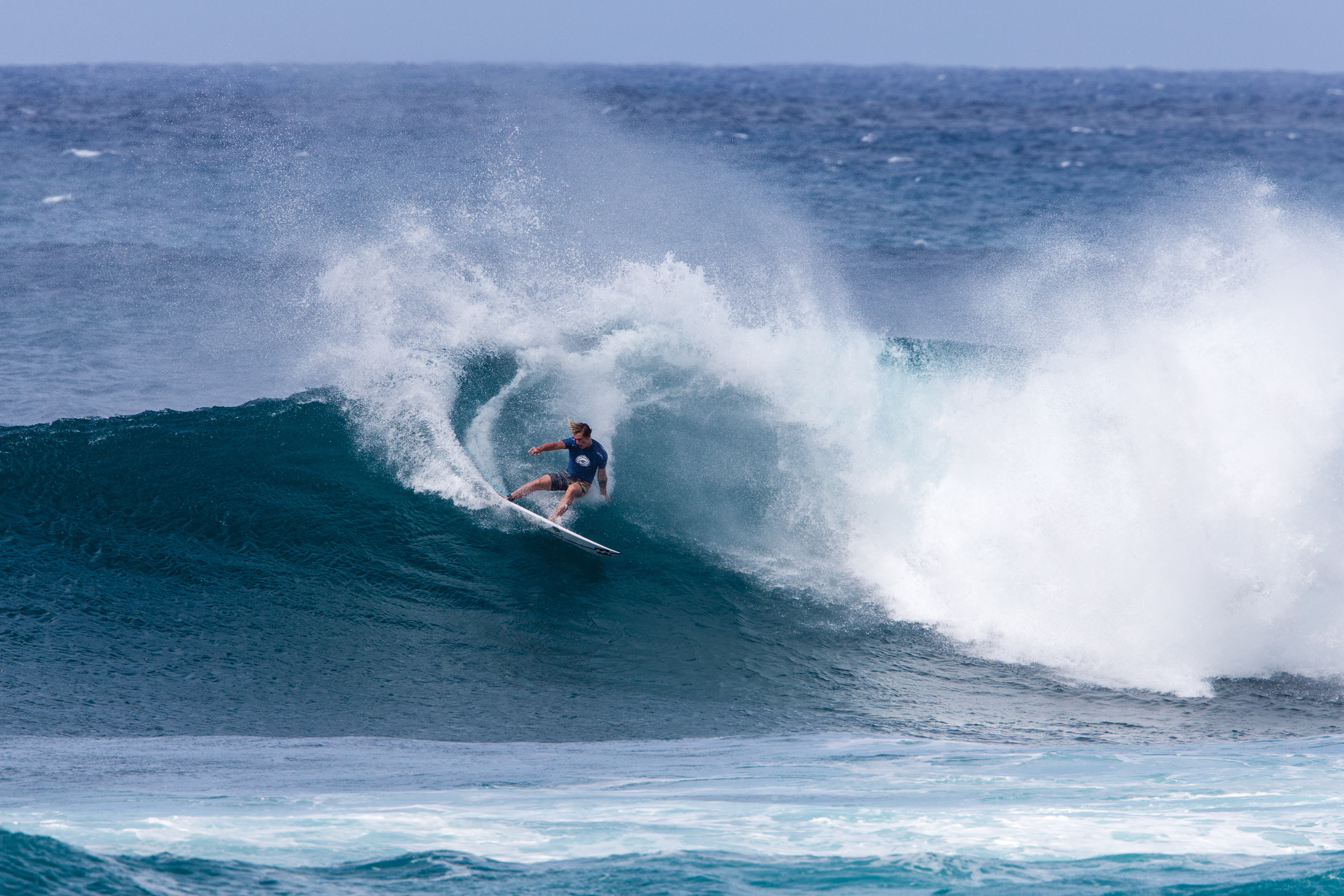 The next generation of power surfing, Finn McGill. Image: WSL/Freesurf/Heff

The 17-year-old scored another near-perfect 9.25 ride – the highest wave of the event – in the Quarterfinals for multiple powerful turns to advance well ahead of fellow competitors. After suffering a broken ankle in 2017, McGill has come back stronger than ever and has a renewed sense of stoke for surfing.

“I think it was really a blessing in disguise,” he said regarding his injury. “I wasn’t doing that great, I wasn’t focused and I wasn’t really training at all and then once I got hurt I really saw what I had and it was amazing. It really made me think about it and work harder and really want it more. Now I’m super stoked on surfing, I want to surf all day, I’m just grommed out all the time now so I think it really helped me out.”

Less than two weeks ago, McGill won the World Junior Championship in Kiama, Australia and after today’s victory, seems ready to tackle 2018 with confidence and power.

“Winning Worlds gave me a lot of confidence coming into the new season and I’m really stoked about it… I want to be in the top 75 at the end of this year on the QS and hopefully that works. I also want to win the junior region really bad.” 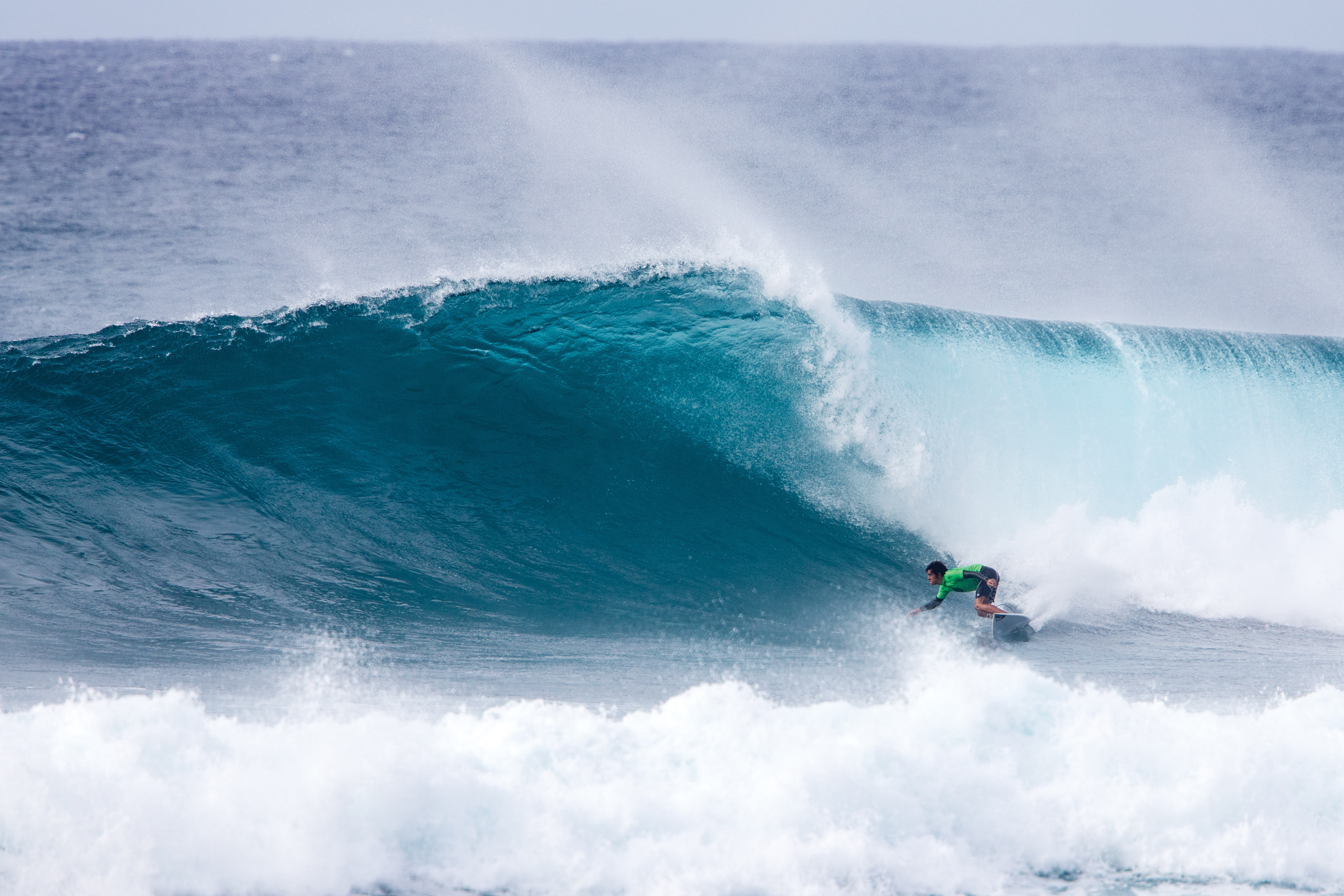 The first 18 and Under competition of the new year, the Sunset Pro Junior featured 32 men and 14 women at the big wave break of Sunset Beach and is known to be an early indicator for year-ending success. The 2017 winners – Mamiya and Zoe McDougall (HAW) – went on to eventually win the 2017 Regional Junior titles.

The Sunset Pro Junior runs in conjunction with the Men’s Sunset Pro, a QS1,000-rated event that got underway this past Thursday, January 18, and saw Round 1 and half of Round 2 complete. Contest organizers anticipate the competition to resume tomorrow morning, Monday, January 22, at 8:00am HST in solid 5-8ft. WNW-NW conditions with moderate E trade winds.