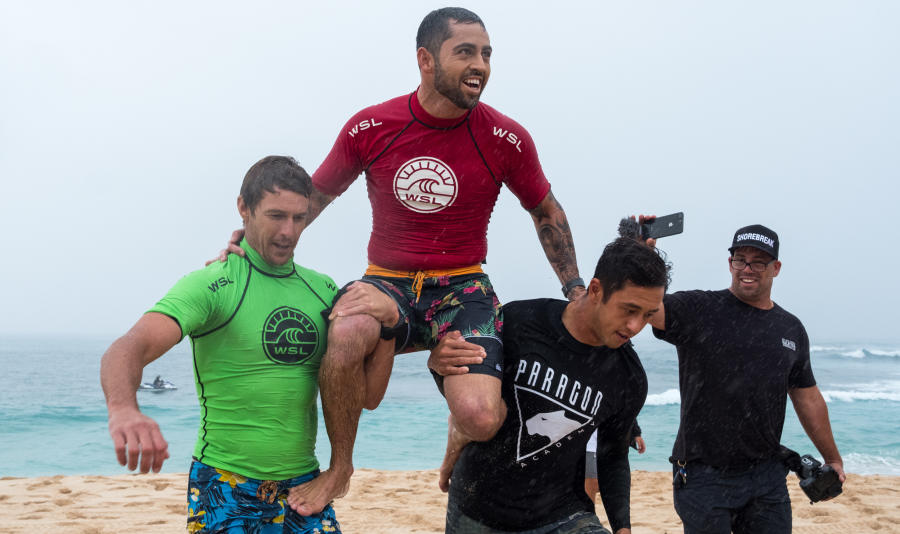 Two-time Pe‘ahi Challenge winner and Sunset expert Billy Kemper (HAW) bested a field of 112 competitors today for the win at the Sunset Open in an all-Hawaii Final that saw Maui athletes Ian Gentil and Ian Walsh take second and third respectively, and Barron Mamiya (HAW) in fourth. A Men’s QS 1,000 event, the Sunset Open is the first of the WSL Hawaii/Tahiti Nui Region 2018 season and sees Kemper earn the lead on the rankings.

“To kick off the year like this, it feels absolutely amazing,” commented Kemper post-awards presentation. “I put just as much time out at Sunset as anyone and I’m just really stoked to end up on top. 1,000 or 10,000, for us here in Hawaii this means everything and I’m really stoked and grateful.” Kemper tucks in and scores one of his top rides during the Final.WSL / KEOKI SAGUIBOIt was a nail-biting Final and Kemper had a strong opening ride to set the pace, a 7.67 for a mixed bag of power turns, then maintained first throughout the 30-minute heat. He continued to strengthen his lead with an 8.27 after finding a barrel off the point and then tallied another 7.30 throw-away score. Kemper’s decades of experience surfing the big wave break was a key component to today’s win.

“I think two of my scores were under their (competitors’) priority and I feel like that was just Sunset Point knowledge,” Kemper continued. “I moved over here when I was eight years old and I graduated from Shores to Vals to Sunset Point to Sunset, so this event was really cool because we got a mix of everything. We started at Big Sunset, went to west reef Sunset and ended up at 3-4ft. Sunset Point, really high-performance surfing.”

Gentil was but 0.24 points away from claiming his first professional win amongst a talented group of Sunset champions. Kemper’s first victory was in 2010 during the HIC Pro, a Men’s QS3,000; Walsh’s in 2005 and ’15 at the HIC Pro; and Mamiya’s last year during the 2017 Sunset Pro Junior.

“I’ve surfed against Billy a couple times, I can’t remember if I’ve ever beat him so I really want to get that done soon, at some point,” said Gentil. “It was cool to surf against Ian and Billy and Barron. Barron rips out here, he surfs 8-footers like they’re 4-footers, it was a stacked Final.” Gentil competed full time on the QS, but has since decided to chase regional points for ultimate qualification into the Vans Triple Crown of Surfing.WSL / KEOKI SAGUIBOAlong with a runner-up finish, Gentil also scored a perfect 10-point ride after he disappeared behind an 8-foot curtain and exited cleanly on his opening ride in Semifinal 2.

“The heat started and I saw Jack (Robinson) paddling over to the west peak and I know he’s always barrel hunting so I sort of followed him, but stayed a little deeper,” explained Gentil of his perfect wave. “I almost didn’t go because I felt like I was too deep, but I knew if I didn’t go he was going to go so I just went anyways. I pulled in and I wanted to come out of it so much earlier than I did but it just kept throwing and throwing and throwing and I just tried to hang on and came out. I was so stoked, I don’t think I’ve ever gotten a 10 in a QS so I was just happy with that.”

Semifinalist Jack Robinson (AUS) enjoyed the event’s first perfect 10 in Round 4 after navigating a lengthy, deep barrel with a near-impossible exit. The Australian blasted through the whitewater and followed up with a couple of powerful turns to close out the heat in first ahead of France’s Tristan Guilbaud. Robinson ended with a 5th place finish after Walsh eliminated him in Semifinal 2.WSL / TONY HEFFWalsh and Mamiya stayed patient in the lineup and were selective with their waves during the Final, both finding mid-range scores, a 6.97 and 6.60 respectively. Walsh was a couple of points shy from overtaking Gentil for runner up with a combined two-wave total of 13.64, while Mamiya was unable to find a solid back-up score to bump up.

This is Mamiya’s second Final appearance in three days, as he took home third place on Sunday during the 2018 Sunset Pro Junior. Mamiya, 17, is the current Regional Junior Champion and had a stellar year after multiple wins and a fifth place finish at the World Junior Championships earlier this month in Australia. Mamiya’s comfort-level at Sunset is well-beyond his 17 years of age.WSL / TONY HEFFTop finishers from Tahiti included O’Neill Massin and Eliott Napias who went against each other plus Kemper and Mamiya in Semifinal 1, but fell just short of advancing into the Final. The two have been standouts along the North Shore for the past few years and will look to increase their regional rankings at home during the Rangiroa Pro Open and Papara Pro Open Men’s QS1,000 events in March.