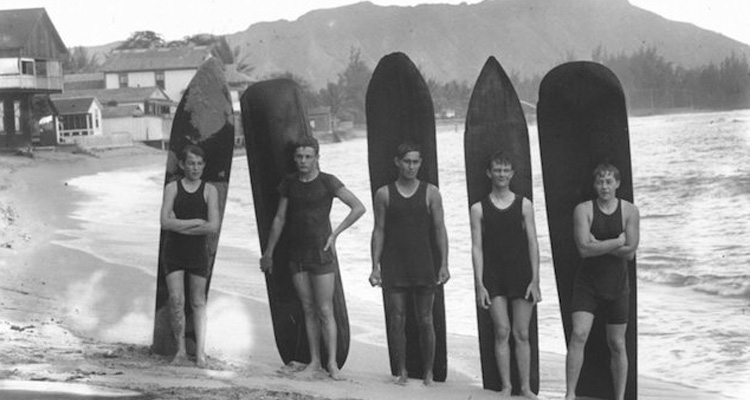 On Duke Kahanamoku’s birthday, Sunday August 24, Jimmy Buffett’s at the Beachcomber and the Honolulu Surfing Museum will be saying “aloha oe” (Farewell to thee) and mahalo to all its loyal patrons. Established in 2009 on the second floor of the Holiday Inn Waikiki Beachcomber Resort at 2300 Kalakaua Avenue, Jimmy Buffett’s at the Beachcomber has been wining and dining locals and malahini for five solid years, while the Honolulu Surfing Museum displays one of the finest collections of surfboards and surfing history in the known universe.

This aloha party will feature an evening of surf history hosted by Ben Marcus – a former editor of Surfer Magazine and author of 16.5 books – some of them on the history of surfing. Marcus will show a DVD called Trunk It made in 2005 for the Surfing Heritage and Cultural Center.

The video is a montage of images of Hawaiian surfing from 1906 to 1947, most of the moving images from the Bishop Museum, with a soundtrack by Duke Ellington, Elvis Presley, The Ramones and some of the great Hawaiian musicians: “I’ve been involved in a lot of history projects,” Marcus said. “But this is one of my favorites. In Trunk It you see moving images of surfing as old as guys surfing alaia at Canoes in 1906, and then through the decades at Waikiki: Duke padding outriggers and dancing hula at the Moana Surfrider, the beach boys pushing happy tourists into waves and riding tandem, an OCC race for women during World War II.”

Marcus will also be there for a book signing and slideshow about the making of his most recent book, 365 Surfboards: “This book was a lot of work and I had a lot of help from Hawaiian residents like Greg Lui-Kwan, Randy Rarick, Tom Parrish, the Campbell Brothers and many others. There is a lot of Hawaiian history in 365 Surfboards and if the book accomplished nothing else, it reunited Bernie Ross-Fernandez with a long-lost 10‘ 6” Downing gun she had ridden in The Endless Summer.

And Tony Moniz was stoked to be reunited with a yellow Ben Aipa gun that his mom had sold for $20, 20 years ago. Moniz nearly won a Billabong contest on that board, and Greg Lui-Kwan showed a lot of aloha in putting it back in Tony’s loving arms. Those are just two stories out of hundreds that went on in the making of 365 Surfboards, and I will tailor the slideshow to a Hawaiian crowd. I am hoping George Downing, Dick Brewer, Joe Quigg and Wally Froiseth will show face, and many others who are featured in 365 Surfboards. There’s a lot of people I need to thank.”