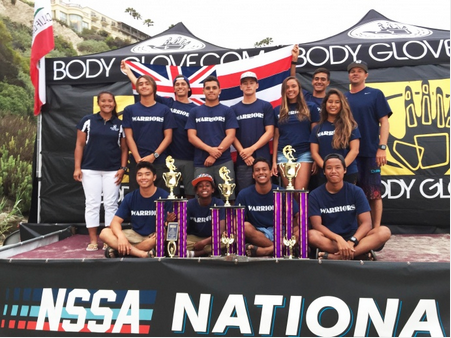 The surf team made up of students at Kamehameha Schools Maui and Kapālama campuses won its second consecutive national championship this past weekend, taking home the 2015 National Scholastic Surfing Association Interscholastic Championship at Salt Creek in Dana Point, California.

“We were the favorite to defend the title, because we returned most of the same surfers from last year,” said KS Surf Team Coach Lea Arce in a statement.  “But it wasn’t easy. We struggled early, and needed a come-from-behind victory.”

The team came from behind to finish four points ahead of San Clemente High School in the final standings.

“Unfortunately, our two senior boys, Charlie Akao and Imai Devault, were in the same semifinal, and only Imai could move on,” said Arce in a press release announcement. “The final was low-scoring, with not too many waves, and Imai was disappointed that he couldn’t defend his individual title. But we needed his points to get the team victory, so we were glad that he pulled through what he did,” said Arce.

Arce said Moore dominated in the women’s division.  “She had a couple of eight-point rides, and it was really satisfying for her because she had a close victory last year, but left no doubt this year.” Along with the national title for the Kamehameha School high school team, the middle school team finished third overall.

The surf team had placed in the top five nationally in 2012 and 2013, before breaking through for their first national title in 2014, and again this year. “We were really a family,” added Arce. “No matter who was in the water, we cheered on everyone, even when some of our surfers got knocked out early. There was a sense of camaraderie and support for each other. That was probably the key to our victory.”