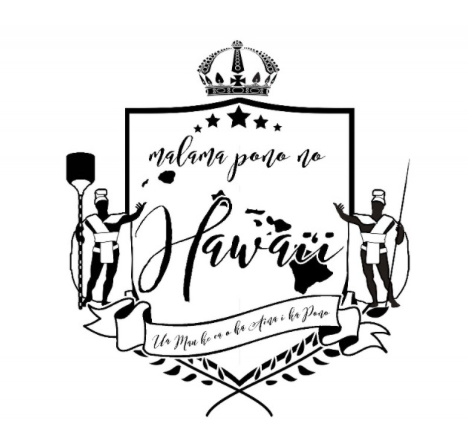 – To Enlighten and Educate the Peoples and Nations of the World to the truths about Hawai’i – that the Kingdom and Nation of Hawai’i exists as a peaceful, neutral, sovereign and independent kingdom and nation which has been unlawfully occupied by the United States since 1893 and that the subjects and citizens of Hawai’i, known collectively as aloha aina, are currently working diligently to deoccupy Hawai’i, reinstate our lawful monarchy – the Kingdom of Hawai’i government – and restore the international recognition of Hawai’i’s sovereign independence by all of the peoples and nations of the world.

– To Empower aloha aina, all Hawai’i citizens and everyone in the world with aloha for Hawai’i with either a strong sense of loyalty and allegiance to or solidarity and support for the Kingdom and Nation of Hawai’i and to encourage them to fulfill their collective kuleana to work to deoccupy and restore Hawai’i.
Donations of ho’okupu or offerings  will be rewarded with beautiful copies of the Declaration of Hawaiian Citizenship & Sovereign Independence and the Declaration of Hawaiian Sovereignty & Support suitable for framing as a daily reminder and affirmation of their aloha for Hawai’i and their sense of belonging to these beautiful islands. Their is also a limited edition, capsule collection of beautifully designed tee shirts available only through this crowdfunding campaign that will be made available as additional rewards for donations of ho’okupu.

The funds raised will be used to enlighten and educate aloha aina, hawaiians and all of the peoples and nations of the world to the truths about Hawai’i in order to dispel the lies, propaganda and false narrative created by the unlawful occupier that Hawai’i is a part of the U.S. instead of the truth that we are an unlawfully occupied sovereign and independent kingdom and nation seeking to be deoccupied and restored to pono or justice, rightness, correctness – a state of harmony and balance.

Na Ho’ike ‘o Hawai’i will use the funds raised to create a website with a global reach that will provide all of the peoples and nations of the world with the factual, evidence-based truths about Hawai’i and empower everyone to stand in solidarity and support with our efforts to deoccupy and restore Hawai’i.

We will also use the funds raised to mount an extensive social media marketing and publicity campaign to help spread the truths about Hawai’i to the peoples of every nation in the world in order that they and their governments can stand in solidarity and support for our efforts to deoccupy and restore Hawai’i.

Hawai’i is a very beautiful, peaceful and magical place with strong mana or spiritual energy that continues to burn brightly even though it has been overshadowed by the unlawful occupation of the past more than 124 years, We wish to throw off the bounds of unlawful occupation so that the light of aloha or unconditional love can brighten and lift up the entire planet once more.

Your ho’okupu will help us to accomplish our goals.