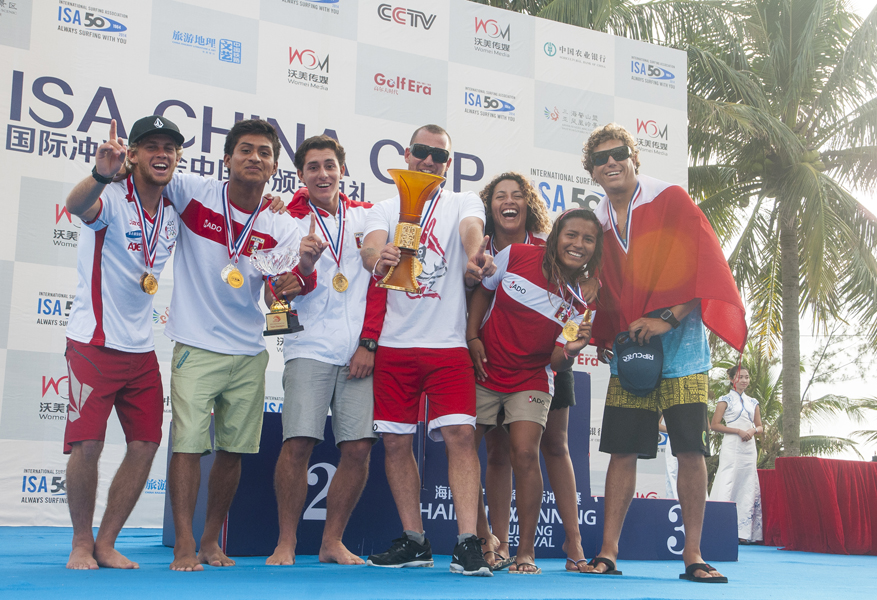 The International Surfing Association (ISA) is pleased to announce the winners of the 2014 ISA China Cup.

With strong performances on both the Men and Women’s side, Peru won the Team Gold Medal and the ISA China Cup Team Trophy. Australia placed a close second, earning the Silver Medal, Brazil won the Bronze Medal, and South Africa took the Copper Medal.

In a dramatic end to the Women’s Final, Australia’s Jessica Grimwood was in the lead with just a few minutes until the final horn, when Peru’s Miluska Tello earned a 6.17 to move up to first place, allowing Tello to take the win, with a total score of 11.83. In second, earning the Silver Medal, came South Africa’s Tanika Hoffman (9.57), in third, earning the Bronze Medal, Australia’s Jessica Grimwood (9.30) and in fourth, earning the Copper Medal, Costa Rica’s Leilani McGonagle (8.50).

“I’m very happy and satisfied with the success of hosting the third annual ISA China Cup. Despite the waves not being the best, the surfers showed amazing surfing skill and provided a great show,” remarked ISA President Fernando Aguerre.

Aguerre continued, “I’m very excited to see the National Chinese Team competing again soon at an ISA World Championship. The opportunities for surfing’s development in China are endless. Congratulations to each member of the participating National Surfing Teams for coming to China and to all medalists. Finally, I would like to express my gratitude to our welcoming hosts, the people and government of China, to our great partners at Beijing Womei Media, and all of the sponsors for joining us in this great competition.”

“It’s one thing to surf for yourself, but to have your country’s emblem in your chest is another thing. You got all your teammates to support you for the heat, and that just gives you more drive. It’s such a beautiful spot here, the water is warm and although the waves are small, it’s a lot of fun. I’ve never been here so it has opened my eyes to another place in the world, it’s fantastic. I’m glad to be here and take the win.

Women’s Gold Medalist, Miluska Tello was ecstatic about her win and commented:

The conclusion of the ISA China Cup marks the start of the Hainan Classic, Men’s 4-Star ASP Qualifying Series event. On Tuesday, November 25, competition will resume with he start of the second part of the Hainan Wanning Riyue Bay International Surfing Festival. With a prize purse of $95,000 US, the competition will feature an international field of surfers, including 12 Chinese, by far the most ever in the history of any international surfing competition. This is a testimony to the success the ISA is already having in the short term to fulfilling its mission to develop global surfing, and to developing surfing in China.