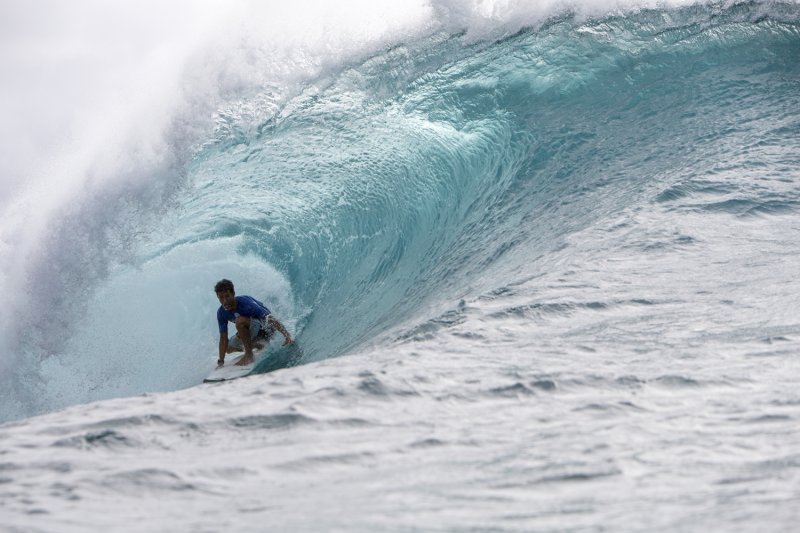 Current leader in the ASP Hawaii Junior Men’s Ranking and former NSSA champion, Seth Moniz (HAW), 16, has won the North Shore Surf Shop Pipe Pro Jr presented by Woodward Group in epic fashion. The Oahu native bested a talented field of top junior surfers from around the globe in tricky 6-8 foot Pipe. Possibly the most groundbreaking event in junior pro surfing competition, the top 20 and under surfers in the world battled it out at the most influential surf spot on the planet. The third annual ASP Pro Junior event at Pipeline was an official ASP 1-Star rated event offering $5,000 in prize money.

The two-day event commenced Wednesday, March 12th. Day one was crammed full of crazy late airdrops, steep and deep tube rides, and cringe-worthy wipeouts. A solid 6-foot NW swell filled in through out the day, providing challenging, but at times, near perfect Pipe and Backdoor action. Competitors as young as 12 tore apart the most sought after wave in the world. Heat after heat, the swell continued to build. Easterly trades cooperated in the morning, offering clean and consistent surf. By the afternoon however, the wind picked up and veered onshore. Local talent continued to drop big scores, but conditions were becoming more and more challenging so the contest was called off by 2:00 PM.

A new NW Swell filled in Friday, March 14th and the contest was back on. Light off shore winds and the rising swell provided pristine conditions for the final day of competition. The morning started off at a friendly 4-foot, but as the Round of 32 came to an end, the surf began to fire. North Shore bred Kona Oliveira scored the first 10 of the contest, pulling into a solid 6-foot Pipeline bomb and getting spit out in front of a roaring home crowd. In the very next heat, sneaking in as an alternate, Kauai’s Koa Smith posted a 9.90 on his first wave of contest. But it would be Southern California’s Griffin Colapinto and Maui’s Imai DeVault who would advance through the Semi’s to meet up with Seth and Isaiah Moniz in the main event. Both the Moniz boys were hungry for victory. Seth had posted the only other perfect score of the contest in his Semi Final match up, but Isaiah wasn’t fazed and looked unbeatable. The final was an epic brother vs. brother showdown, but it was Seth who came out on top.

The event was put on by North Shore Surf Shop owner Liam McNamara, with the help of ASP Hawaii Administrative Director Faith Wenzl, Contest Director Shane Beschen and major sponsor Woodward Group. This is the sixth contest McNamara has put on in three years, elevating the level of surfing in Hawaii five-fold. The previous lack of opportunity for Hawaii juniors motivated McNamara to spearhead a change. “I had the urge to give back to the sport that gave me everything,” said McNamara. “The junior events give the kids an opportunity to elevate their knowledge of competition while earning valuable rating points and experience. My goal is to elevate the sport while giving a platform and opportunity to the future of Hawaii.”

Owned by Liam and Brandee McNamara for more than 13 years, North Shore Surf Shop is regarded world wide as the go to shop to get the best board for your Hawaii surf trip. More pro surfer’s boards have been sold through North Shore Surf Shop than any shop in the world. NSSS is a grass roots company and supports numerous riders on the North Shore.

About Woodward Group:
Since its foundation in 1938 by Alfredo Woodward Tellez in Manzanillo Harbor, Woodward Group strives to provide logistics services, customs clearance, freight, consultancy, custody and handling of goods in and out of Mexican territory, providing a personal touch to the needs of our customers and suppliers with an efficient top-quality service.