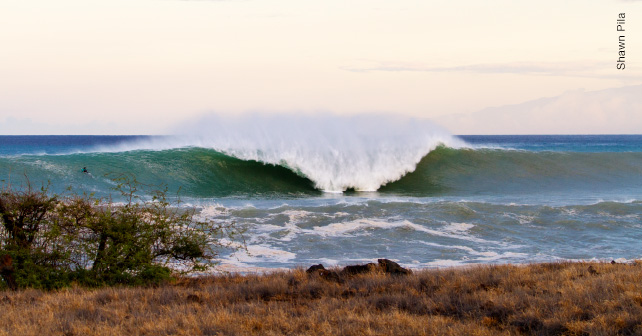 Few & Far Between: The Life of a Big Island Surfer

It was early on a cold December morning when a group of dedicated surfers decided to make the two-hour trek across Hawaii Island on a mission to find decent surf. With a massive 280-degree west-northwest swell on the horizon, the chances of actually getting waves were higher than usual.

“This was a rare swell,” recalls Hilo surfboard shaper Robert Patterson. “Not by size but by direction. It was so west that it almost got the same size as the North Shore. Usually we are looking at Oahu forecasts and dividing them in half, but this time it was pretty close.”

Over the past few months Patterson and the boys had been tracking each swell while keeping a journal entry log of every trip along with buoy readings and forecasts. Unlike the Northern Shores of Oahu, surfers on the Big Island take on additional challenges; long drives over Saddle Road, intense 4X4 rambling through thorny keawe forests, then hiking over a’a lava fields to the shore. This requires a lot more time and if you were to make the wrong call, the day and good morning conditions would slip by. Roll of the dice.

However, on that December morning, it seemed like a sure thing. The thunderous pounding of surf against jagged cliffs and the faded view of the moonlit ocean had these swell chasers foaming at the mouth. Like wise man Jeff-O once said, “The buoys never lie. You can have all the forecasts in the world, but the buoys never lie.”

Once the sun peaked its face over Mauna Kea the first taker began to paddle out, sitting on the lineup making a much better scale on how big it actually was. Solid and consistent 6 to 8 foot drainers kept these die-hard water-babies busy while 10-foot cleanup sets made it that much more fun. But what made this swell unique was the crowd; just a handful of bodyboarders and surfers, a group of best friends from around the island and the “panty dropper” on water patrol. What more could you ask for?

Even though good waves are uncommon, it’s the mission itself that makes it all worthwhile. Good friends, un-crowded surf and a few beers next to the campfire. As the youngest island in a centuries old chain, the growing pains and misfortunes only make rewards that much sweeter. And for those lucky enough to be there when the elements do line up know full well, they come few and far between.