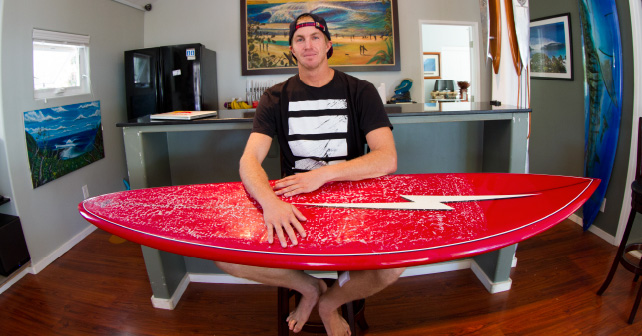 If there was ever any confusion as to who would inherit the title of “Mr. Pipeline,” Jamie O’Brien certainly cleared that up. It’s no secret that Pipe met her soul mate when Gerry Lopez caressed her peak in the early 70’s. Carelessly gliding through gaping barrels on his signature Lighting Bolt board, Gerry approached the wave like none before. Fast forward to 2014 and you’ll find a new generation of chargers regulating the lineup; a long list of prominent CT veterans and diehard locals who have made it their life purpose to dominate Pipe. But of them all, it’s Jamie O’Brien who would literally inherit the mantle of “Mr. Pipeline.”

The talented regular footer grew up with the infamous peak as his playground. Toying with waves that would make most surfers shishi their boardshorts, Jamie has redefined what is possible at both Pipe and Backdoor. After dominating Pipeline’s opening swell in October, the super freak turned heads once again when he paddled out to Pipe on a Gerry Lopez shaped Lighting Bolt.

“The 7’2 Gerry Lopez Lighting Bolt board was a replica of one of Gerry’s boards from the 1970’s. That era Gerry ruled Pipeline,” says Jamie.

After taking the board to Tahiti for a Red Bull Decades’ trip and coming up short, Jamie decided to give the Lighting Bolt the waves it deserved. On the evening of December 4th, Jamie eagerly prepared as an approaching swell descended upon the North Shore.

“The night before I was freaking out. I didn’t have a fin,” said Jamie.  “I was loosing it, who has a single fin? It just looked like one of those days where tomorrow is going to be good and I didn’t think I was going to be able to ride the board.”

Luckily MomJohn was there to lend a hand, or in this case a fin, and Jamie didn’t miss a beat. “I woke up fired up. I got out there before the sun came up and just kept picking off really fun waves,” said Jamie. “It was only 5 to 7 feet, but it felt pretty special to ride this board. The way this board paddled, it was incredible. It was like a Cadillac it was so smooth.”

While the board paddled like a high-class luxury vehicle, maneuvering it through a heaving Backdoor barrel was a different story.

“This board (as he holds up the Lighting Bolt) is one of the most difficult boards I’ve ever rode in my life; and I’ve rode no-fin boards, I’ve rode soft tops, I’ve rode longboards and I’ve rode boogie boards,” Jamie recounts. “This board was that difficult. But it made it challenging, and that’s the cool thing about it. Maybe a couple people have done it, but not in a long time.”

Making a soufflé is challenging. Throwing yourself over the edge of a heavy Backdoor double up on a retro singlefin and living to tell the tail, now that’s damn near impossible.