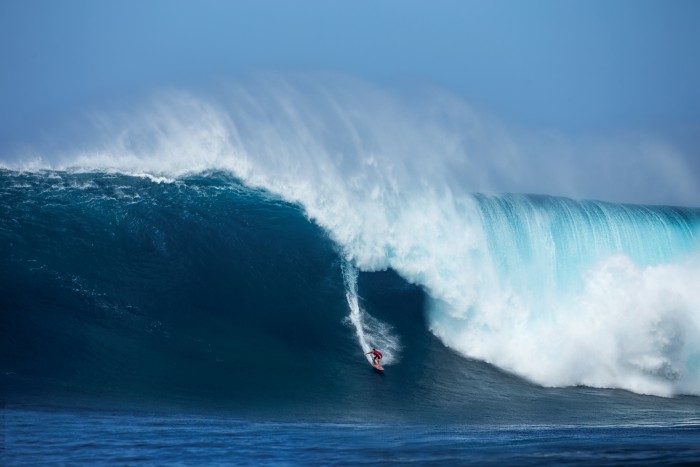 For this swell, everyone went over to Jaws the day before and I didn’t go until the next morning. I decided to wait and see if Pipe would be good, so at midnight I looked at the buoys [for Jaws] and it was coming up. At 3 am I went and looked at Pipe in the dark and it was only 4 feet. Around 8 am, the [Jaws] buoys jumped to 19 feet at 19 seconds and that’s when I drove straight to the airport. By the time we landed in Maui, it was 24 feet at 19 seconds. I definitely cut it as close as you could because I got off the plane, got a rental car, drove straight to the cliff and then swam out. I was able to get on the ski once I got out to the break.

I went out around 1 pm, and took this photo of Aaron [Gold] around 2:30. It was so chaotic. There were so many skis: at least 15-20 skis with photographers and videographers, with more skis for rescues. It was so hard to get a clean shot. Everyone was trying to jockey each other, fighting for scraps. Almost like at Teahupoo, where people are pushing so deep that they’re nearly going over the falls. In the foreground of the shot, I actually had to Photoshop another ski and a guy out. I was fortune to get the photo as clean as I did.

I’ve been family friends with Aaron for my whole life, and earlier that day I saw him with a big smile on his face and told him that he was going to get the biggest wave of the day. He always sits in the same spot – the North peak, while a lot of guys sit on the inside West bowl. The biggest waves come out the back on that North peak, and that’s where he was when this huge set came. All the skis were motoring out, and the next thing you see is this black blob turning into a blue bob and you see him up on it. It seemed like it took forever for Aaron to get to the bottom of the wave. A normal wave at Jaws would have taken a quarter amount of the time and as he was going down, the face kept growing.

It’s the biggest wave I’ve ever seen. My theory is that a lot of guys like shooting from land because it always looks bigger. If it was really going to be the swell everyone was hyping it up to be, it’s more realistic to shoot from the water. Even the XXL judges look at the water angle. Shooting from the water gives you that perspective because you’re low down and you can see the height of it.