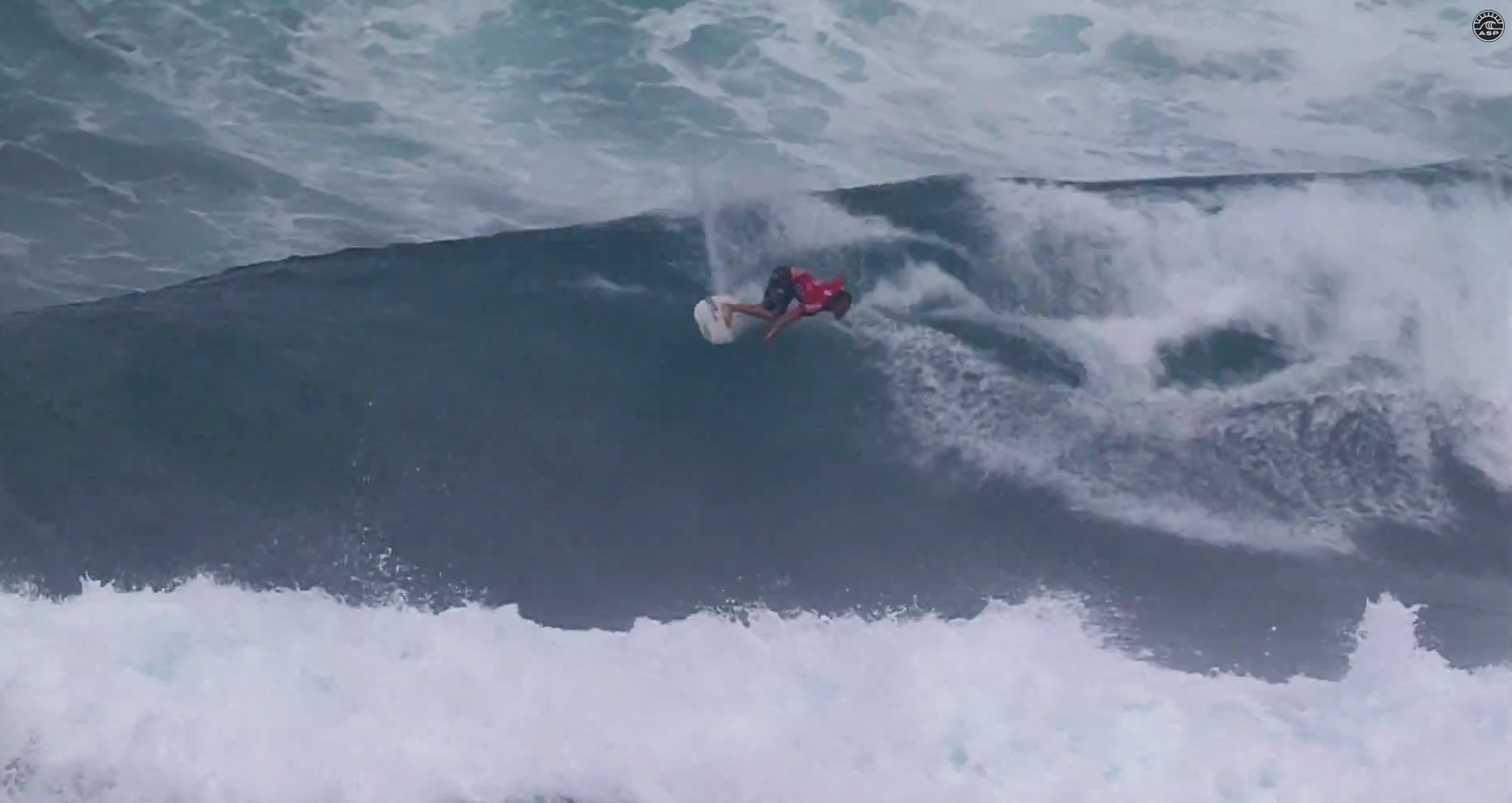 The Vans World Cup of Surfing – stage two of the Vans Triple Crown series – commenced at Sunset Beach today in stormy 10- to 15-foot surf. Following 24 hours of strong, onshore winds, the unpredictability of the waves was visibly reflected in scores that ran the gamut. It was no surprise that today’s surf favored those with intimate knowledge of this vast and varied lineup, and surfers from Hawaii dominated the top wave and heat scores, led by Maui’s Kai Barger.

As was the case in so many of today’s heats, a win often came down to a last-minute effort in the 25-minute match-ups. Barger, 25, was no different, producing the highest wave score of 8.93 in the dying moments. His two-wave total of 15.70 out of a possible 20 remained untouched throughout the day.

“I was actually panicking before I caught that wave,” said Barger. “I never felt comfortable that whole heat and I’ve been losing a lot, so that all adds to the stress I’ve had. I just got lucky. I swung, caught the wave, and it turned out to be good. It means a lot to me just to come over here and do these events and potentially do well in one.”

Australia’s Perth Standlick, 24, shrugged off a nagging ankle injury he sustained on the North Shore a couple of weeks ago to post a clear heat win. While conditions were tricky, the size seemed to play to his advantage.

“I rolled (my ankle) coming out of the barrel at Off-The-Wall a couple weeks ago and I’ve just been doing rehab and being pretty careful on it,” said Standlick. “With all the strapping it’s pretty locked up and there’s not really any way I can roll it. I can’t really do a sharp bottom turn but it’s not like you need to at Sunset when it’s this size.”

The Vans World Cup is the second stage of the Vans Triple Crown of Surfing series and Marocco’s Ramzi Boukhiam, 21, is looking to improve his ranking here after a solid showing at the first stop at Haleiwa two weeks ago. Boukhiam lost out a round short of the Quarterfinals there but was looking sure-footed and powerful on his backhand attack of Sunset’s right-handers today.

“I felt good out there but it was definitely very tricky,” said Boukhiam. “It’s so difficult to tell which waves are going to be the better scores but I was feeling comfortable on my backhand.”

Maui’s Dusty Payne, winner of the first event of the Vans Triple Crown, has a one round head start this week and will make his debut as leader of the series when competition resumes.

The No. 1 seed for this event is Australian Joel Parkinson, who makes his 2014 Hawaiian winter debut in this event in Round 3. A three-time champion of the Vans World Cup, Parkinson will hit the water on day three, matched up against Raoni Monteiro (BRA) and two surfers from the early rounds.