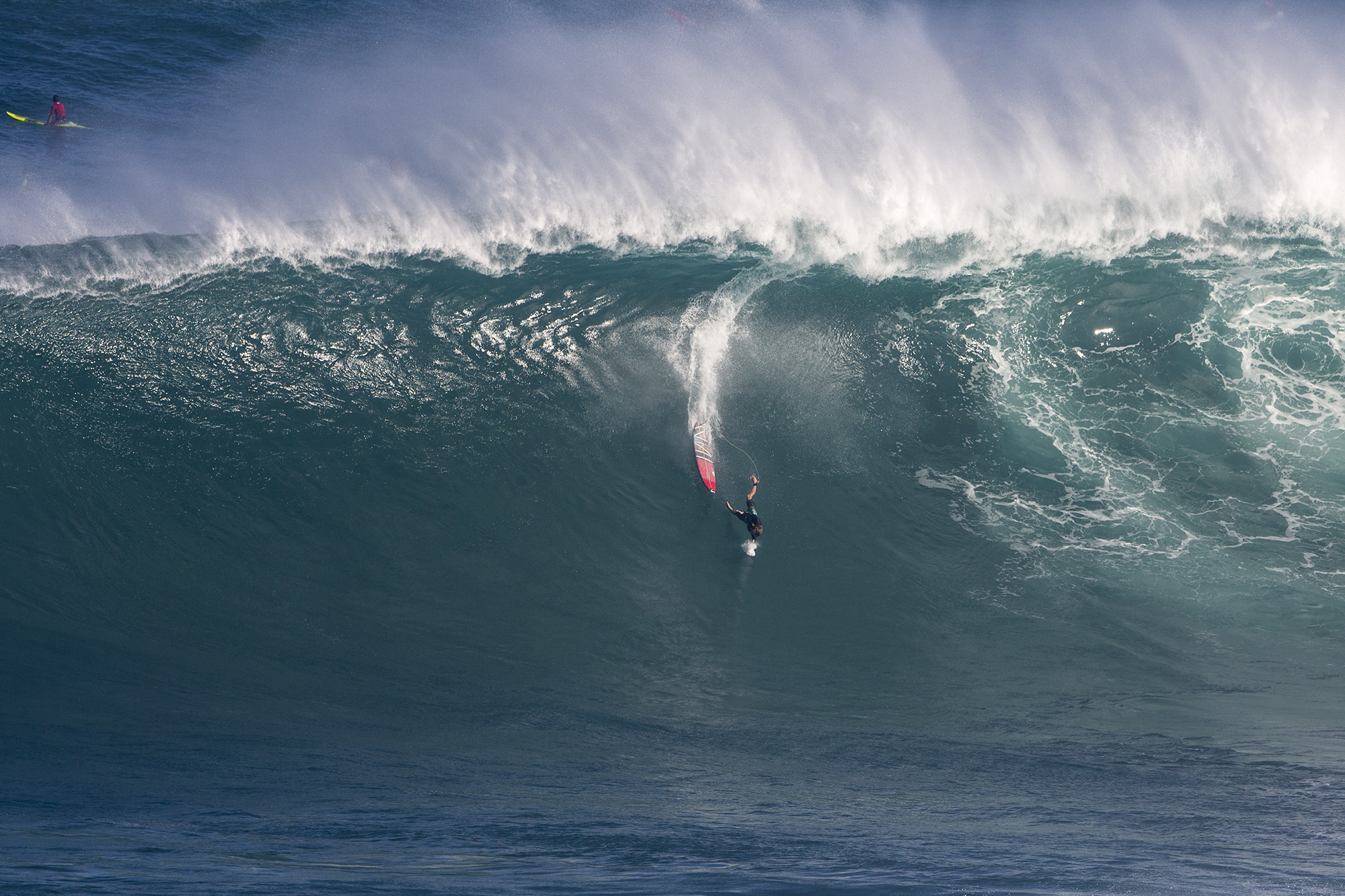 Torrey Meister and Kook of the Day aren’t two names that belong in the same sentence in anyone’s mind, but that’s exactly how the Big Island native said he felt after two gnarly back-to-back wipeouts during the first big Jaws swell of 2018 last weekend. Hunting the west bowl on the 20-30 foot sets produced by a storm nicking the Islands Saturday, Torrey cartwheeled head first into some of the most real, raw, and violent Pe’ahi waves we’ve seen in months. We caught up with Torrey on Monday night about the impacts that made him see stars and how he shook it off to keep his mind right when he comes back to Jaws for more on the next one.

How ya feeling? Neck a little sore today?

Oh, I’m pretty buss up. (laughs) I got pretty licked, I was pretty blown and done.

It was scary, man. North swells are just weird, it was very raw. The storm was almost too close to Hawaii. It broke up the swell a lot and made it super jumbley. Nobody got a proper barrel — there were a couple pocket rides but no one got like a sick drainer.

It was really, really big at first light, almost at the point of not being paddle-able. But it did look big and perfect from the beach, so we geared up. Even though it looked that big, it was reassuring that the swell was dropping a little bit and then it kind of dropped really fast. When you have a big swell that’s dropping it makes things really sketchy at Jaws because it’ll go flat for a while and then all of a sudden there’ll be a giant wave and you’ll get caught inside. It’s like the perfect recipe to get caught inside. It stops for 30 minutes and then here comes a friggin huge wave.

I think we got really spoiled during El Nino, we’re all still buzzing off those swells thinking that every glassy Jaws swell is going to be like that, but it’s rare. Jaws is not the kind of wave that’s just good on every swell. The swells that are just one day, maybe two, are better. Like when it comes in late, breaks for a day and then drops off. This was kind of reinforcement swell. It got big and then dropped a little bit and then got huge. Maybe it was just the swirling of it kind of swirled too much (laughs). It was strange, but it’s all good. Good to be in one piece.

Talk us through those wipeouts.

The first wave I went on looked like it would be a perfect West Bowl, but I went super late and then caught a rail, fell and went up and over. Then I was really frustrated and didn’t catch a wave for like an hour. The crowd was getting really thick so I paddle pretty much straight back out and the next wave that came I felt like I was in the spot. So I didn’t have much time to recover after the last one and kind of the same thing happened.

I felt like I got a good little chip shot and then all of a sudden I hit this chop and wasn’t bracing for it at all. I thought I was making the drop and I was going to kind of knife it right at the start like you kind of have to do out there. It all happened to fast — when I was on the wave I had no sense of falling at all, everything felt like the way it should’ve been. The line I had felt great, everything felt great, and next thing I know I felt my board getting kind of airborne and I think I wasn’t really ready for it so I was going more sideways. I wasn’t thinking about sticking the drop, I was thinking about what was coming because I was pretty deep on the wave and trying to pull into it, so I kind of got caught off guard.

I just skipped out super hard and my board kind of just stuck. It was like hitting a speed bump going 100 miles per hour and I landed straight on my face like full legs up in the air scorpion style, and I remember hitting my shoulder and my neck area really hard. When I first hit it was probably the hardest I’ve ever fallen. When a wave’s like that it’s like hitting concrete. I kind of saw stars and I thought I dislocated my shoulder for sure. It was really numb and I was just getting rolled. I didn’t even pull my vest, I was just holding my shoulder thinking I could hold it in.

It was very violent but it let me up pretty fast, and when I came up I had a huge white water wave on my head, so I pulled my vest because I was pretty shaken up. We have a jet ski driver out there, Ollie,  and he was so fast and got to me and put me on the ski. I got really really blessed that I didn’t dislocate it because I thought for sure that’s what happened. Then I just sat in the lineup for another hour and a half, two hours and watched the waves.

But then you went back out right?

Later on I decided to go back out. I had to shake it off, even if I only caught a small wave I just needed to do that for myself. I never want to leave Jaws on a note like that, falling. It definitely shook me up a lot. went back out there and sat for like an hour and then caught one wave in.

If you get hurt, for me the worst thing I can do is just walk away. If it’s really bad, obviously don’t go back out. But if you can, I don’t want to save that feeling for another big swell and go back and be thinking about that.

You tagged Kook Slams on your post — did they end up featuring you?

No, they didn’t unfortunately (laughs). I just kind of felt like a kook, I don’t know. I didn’t expect to eat crap like that twice. It’s one thing if you do it one but to do it back to back…I was kind of just calling myself out, it was more of a personal thing (laughs).

Are you already thinking about your redemption session?

I’m definitely looking forward to another one, I want to redeem myself for sure. But I’d love for the next one to be a little more west, a little more open. Every single wave seemed to clamp and there were a lot of variables, and wiping the dust off the boards as well. I went over there for the contest and surfed a little but in between, but that was real Jaws and it was definitely difficult so it felt good to wipe the dust off.

I love it there. I love staying with Albee and the crew that always comes over. It’s such a positive crew and we always have such a good time, so even if the swell’s not good or just right we just laugh a lot and have a good time.