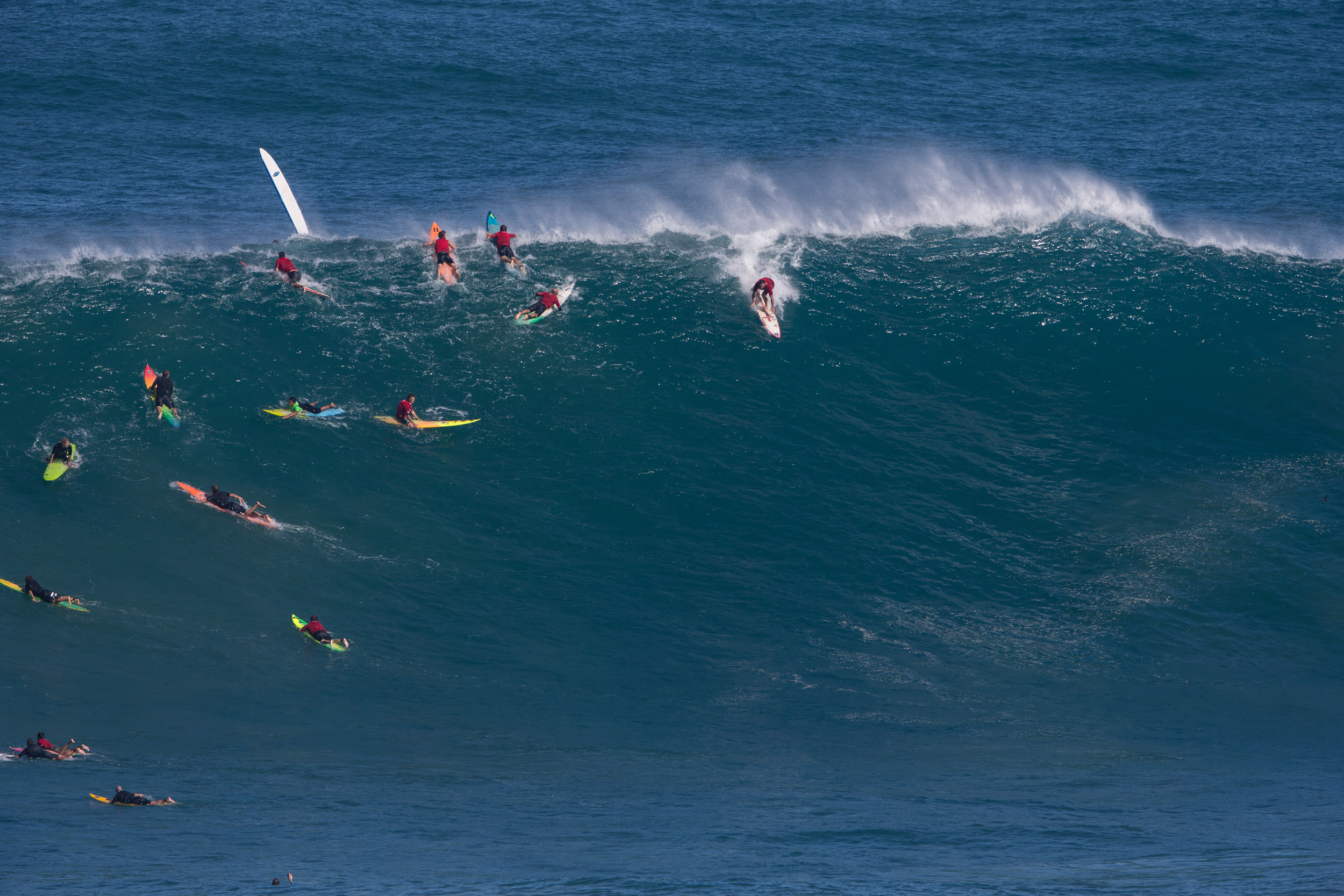 story and interview by Kyveli Diener

Last weekend at Jaws was the biggest of the winter at Maui’s big wave proving ground, and poetically it was almost two years to the day from the best day of all time there. That day was January 15, 2016, better known as Aaron Gold Day in honor of the record-breaking ride that secured the Paddle-In Big Wave Award for the Hawaiian charger (wave height: 63 feet). Gold was among the lineup of brave men and women that faced Pe’ahi this past Saturday and Sunday in some of the gnarliest conditions imaginable before immediately turning around and flying out to California to catch a few bombs at Maverick’s the next day. During a brief respite on land, the 35-year-old broke down those challenging Maui days for us and explained why he values the tough days just as much as the historic days like Aaron Gold Day.

How was your weekend out at Jaws, Aaron?

It was super hard out there with the period and the swell the way it was. It was really disorganized with a couple different swell directions…Every little bit of it wasn’t easy. You had to either sit inside and pick up those double-up heavy ones and get under it, or there’s big ones coming outside and you wait out there for those. You kind of had to play your own game and that made it hard. Pretty much both days it was that kind of a day: you caught the wave and no one was making these amazing rides all the way through. A lot guys got their beatings. I got smoked, just got really, really pounded on both waves.

Talk us through the rides you did find out there.

I got two good waves, one each day — one and done, and I was stoked. It was a relief, honestly. When I had gone for the Jaws event I had the worst session I’ve ever had out there, so in the evening as it was getting later and later I was like I just want to get a wave, I don’t want to back it up with a no-wave session. That would have been really frustrating for me, so I was just thankful.

There was a lot more water moving that first evening —I was out there for about three hours or so before that wave popped up and just got really steep on the take off. I knew if I wanted that one I had to turn and burn. I actually cracked my fin [on the rocks on the way out], so my outside fin if I was going left was cracked and I could feel it when I dropped in on the wave. The thing came and I was outside and happened to just be in a good spot. It picked me up and was just steep and critical. I was going so fast and getting to the bottom I could just feel my fin. I could just feel it tracking and I did my best to get my line where I could try and make it. Then I looked up and the side kind of bent and came at me and I said, “OK, let’s see if we can ride this out” and I just got annihilated, blown up.

On Sunday morning it was pretty bombing right at first light and we kind of took our time getting down there after getting up early and having a session the day before. I ended up riding a back up board that’s really light, it’s a really good board. It’s actually an exact copy of the one I got the Big Wave Award on but it’s an epoxy version so it came out a little lighter. I knew there was still that big wave and I hung out the back like live by the sword die by the sword and hope I get a big one, and finally one came together and popped up. I was in the perfect spot, I saw it early, turned and was head down and it peaked right where I was at and gave me a really easy couple strokes up.

It actually had a big suck up ledge kind of thing where I had to push over it if I wanted to keep going. I could’ve just kicked out but it was really fun to just throw it over the ledge and make the big drop. There was so much swell, and just from all the water moving every wave you took off on was just bumps and chatter and hard to set a line and get the line you wanted. With a light board you just do your best to get it but there’s a ton of bumps and I just wanted to make the board work and go. It was super fun, it was an all-around good wave and I was just stoked I got a wave, and that was good enough for me. That’s when I called it a day and decided to save the rest of my energy for Mavs.

That’s so funny because I didn’t even know people refer to it as that and someone just today said that to me [at Maverick’s]. That’s the first time I’ve heard it (laughs).

That day was really special and I don’t know that I’ll ever get to see another day like that in my life. That day every single wave was big, and honestly it’s a lot easier to get a big wave when there’s a lot of big waves and then those extra extra big waves. This swell was a lot slower and just took a really long time to come. So there were really big waves, but in between it wasn’t constant big waves so you couldn’t position yourself, you couldn’t get in the spot. You were constantly looking for a place to be and if you were there, you got it. You really had to put your patience and time in and I honestly was stoked to get a wave. Big wave, whatever — I was out there and that was my game plan was to sit outside and know there’s big waves coming and just try to wait it out.

What do tough days like last weekend do for your mentality?

Every day is so different out there and that’s what makes that place so challenging. It’s one of the best big waves in the world and it shows you a different face every time, so you learn. It puts things in perspective: that place is scary and heavy. The best surfers in the world get humbled, including myself. Those kind of days makes you really appreciate your fun surfs that are big and clean and perfect, it just really puts it all in perspective. You gotta have those days to really appreciate when you get the good days like when we came up here to Mavs [on Monday] and it was a really amazing day, just clean and perfect and a fun surf with not every wave you’re paddling into expecting to get the gnarliest wave of your life. Without that, you wouldn’t have the value of when we do get a good day, so I love it in every aspect and I’m thankful I got home safe and everybody else got home safe and the water crew did an amazing job and took care of everybody. That’s the beauty of what we get to do every day in big surf.