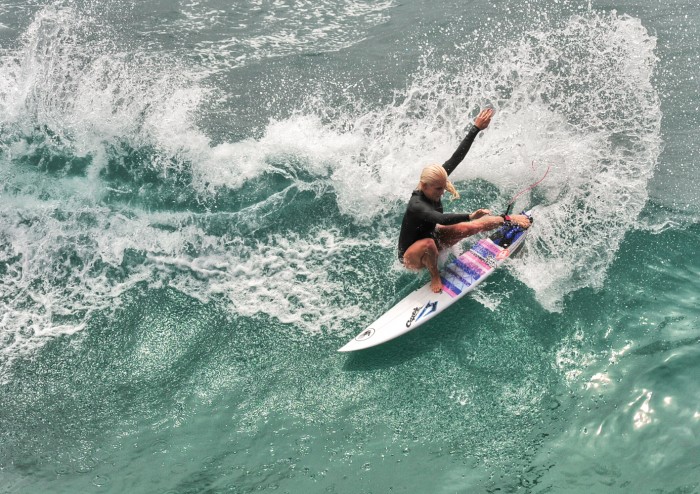 For the Record: Tati Weston Webb on Tour Life

Now that your rookie tour is coming to a close, let’s look back at your qualification and how it all started. Ever since nationals, the dream to be on tour was there. I knew I wanted to be professional surfer, and a lot of people had doubt that I would make it as fast as I did. The first year I won the ISA [International Surfing Association], I had started competing on the WQS [World Qualifying Series]. I got into 3 or 4 events, finished runner up and the next year I had the opportunity to do injury replacement at 2 or 3 events. That was a great experience because I learned a lot. I got a taste of what I’d be doing for the next year. So I stepped up my goal and re-qualified that year. It came down to the nitty gritty in Brazil, competing with Alessa Quizon for that 6th spot. I qualified, now I’m on tour and it’s been amazing.

What are some of the resounding lessons you’ve learned during heats on Tour this year?

At Snapper, I got a really good result – 3rd. I lost to Stephanie Gilmore. At that point I could have gone further but I was starstruck when I had to compete against her. It was almost as if it wasn’t reality, like it was alway a dream…competing against someone I idolized my whole life. So I didn’t have my game face on and after that event I needed to learn to compete against the people that have inspired me my whole life instead of just surfing with them. Going into the next few events did ok….for me a lot of it has to do with mind practitioning and after that loss to Stephanie I drilled it into my head that [the Tour] is not fun and games. It’s a job. You’re not competing with them. You’re competing against them. You can’t be starstruck. You have to be a professional and that was a wake up call. You have to be competitive and strive for the best even if you’re competing against those that inspire you. I’ve been taking everything in like a sponge from each event and learning from my mistakes.

What challenges come to mind when you think about your year thus far?

Being comfortable with what I’m doing 100% of the time. That’s something you have to have down is being comfortable and knowing what’s going on. It’s so hard to be prepared with lay days and to figure out what to do with off days. And also what not to do. It’s challenging to hold yourself back when the waves are firing. Mental preparation been challenging as well. I’ve done really well with it, but I’m still learning so much because there’s always things to improve on. That’s another challenge: realizing you’ve done some things well but there’s so much room for improvements. You can’t stop working towards your goal.

You’re 19, and facing far older veterans of the sport. How has confidence played a role in your success?

That was one of the biggest things I learned was to have confidence going up against your competitors because if you have a lack of confidence that will bring you surfing down. You need to do your best against surfers like Carissa and Stephanie. For me having so much confidence going against people like that, it makes a difference and it makes me surf better. I learned that going into a heat I needed to know what you’re going to do and how you’re going to beat them. Also be confident in your decisions. If you have to adapt to something that’s not working, you adapt and that’s the way you win your heats. You have to dumb it down. If you don’t it gets too complicated. That’s the funny thing. It’s simple: you need 2 good waves with 3 good waves on them. If you dumb it down, it’s easier.