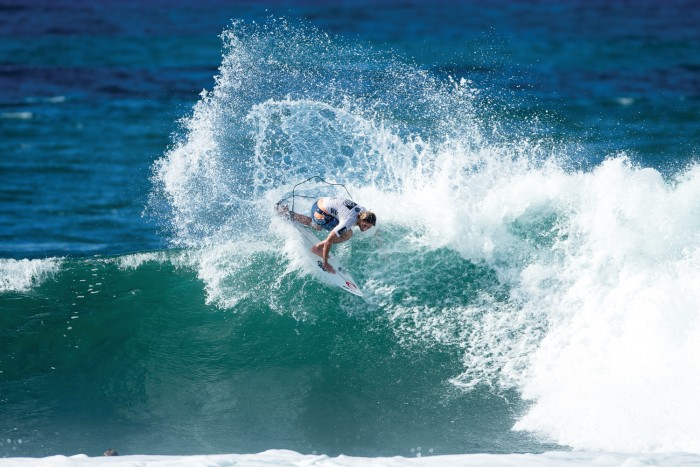 For the Record: Matt Wilkinson on the North Shore

What’s it like living in a team house for weeks at a time on the North Shore?

I love hanging out with people. I’m one the kind of person that hates being alone, so staying in big house with friends is awesome. Everyone that’s here, I’ve grown up surfing with and traveling with. We have a lot of fun and we’re really close. Some people like their private time, but we all have rooms so you can get away from it if you want to. It’s good fun. After the contest everyone drinks beers on the balcony. Up here every 10 seconds you stand up and say ‘aw’ there’s a sick one! See the waves enough and you end up going out surfing whether you planned to or not. [Living in a team house] is good for your surfing, it’s also you’re doing everything you normally do but you have this entertainment out the front. It’s cool watching people getting barreled
or throwing big airs while you’re making breakfast. The boys at the other houses… Oakley, RVCA, you walk along the front of the fences and see what everyone’s doing, walk over for a coffee. Everyone’s good friends. It’s a cool vibe around here.

Do you still see localism reigning in the water here on the North Shore?

You just need to respect the locals, there’s always a strong vibe from the guy’s. I’ve been coming here for 12 to 15 years. I know most of the guys, they’re all pretty good but you don’t mess with them. It’s definitely intense. Sometimes there’s nowhere else to go [to surf]… wherever we go out it’s along this stretch and there’s always locals out. You have to be careful to not do anything wrong.

Favorite break is Chacos, the left. There’s always thousands of people out the front here [referencing Pipeline], so it’s good fun to sneak off there. When you’re out here you feel like you’re working. There’s always video and photographers when you’re here competing. There’s so much hype and it’s good to get away from it.

Does the sound of Pipe ever wake you up, since you live so close to it?

You wake up in the night when the swells picking up. It’s kind of scary, the whole house shakes if it comes on the next day. It’s exciting when the swell comes up.

Does Pipeline still make you nervous?

The thing I’m most scared of is getting a bad wipeout and coming up and being right in the spot when the next wave is about to land on you if it’s a big thick monster and you’re on a shallow reef. I don’t get too worried about deep water waves like Sunset and Waimea. As long as you can hold your breath for a little bit, you’re pretty much fine. But out on reefs like Pipe, I feel like you’re going to get thrown into the reef. It scares me to hit my head or get torn up on the reef… I’m bad around rocks, and that’s a bad thing for a pro surfer.