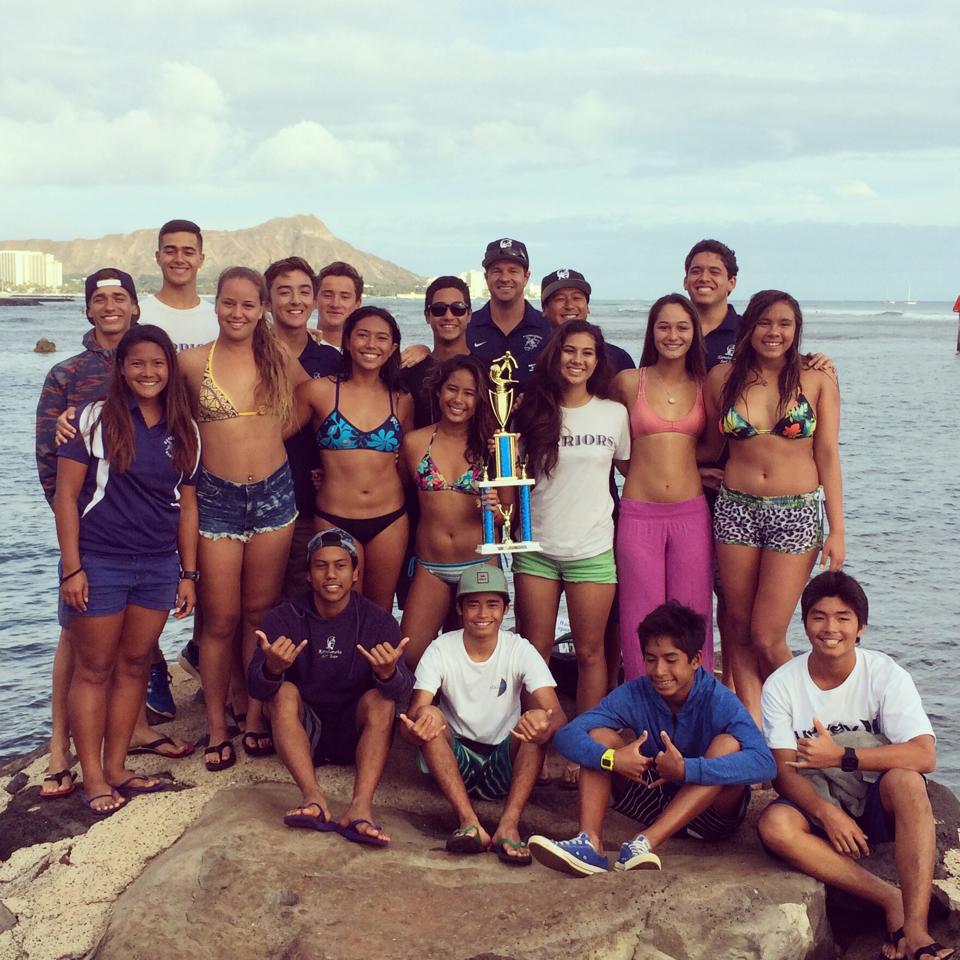 MAGIC ISLAND, O‘AHU (April 28, 2014) – The Kamehameha Surf Team won their fifth consecutive Hawai‘i Surfing Association (HSA) State championship by beating Kahuku High School 75-49 this past weekend at Ala Moana Bowls. For the second year in a row it came down to the final event of the season between Kamehameha and Kahuku with both schools entering HSA States with undefeated records, setting the stage for an epic battle in contestable, 4 to- 6-foot wave face heights on Saturdayafternoon. Kamehameha dominated the field of competition, claiming first in all six divisions. A full high school surf team roster consists of four shortboard boys surfers with two different heats, two body board boys, one bodyboard girl, three shortboard girls, three longboard boys and three longboard girls.

Kamehameha Surf Team Boys Shortboard Captain, Chasen Kim, 18, led the charge with a two-wave heat total of 18.75 out of a possible 20 points. As a senior this is Kim’s final year on the squad and has been a valuable member to the Kamehameha Surf Team since his freshmen year.

Girls Captain, Cayla Moore, who is the sister of reigning ASP Women’s World Champ Carissa Moore, was the anchor of the team on Saturday. The junior at Kamehameha placed first in both shortboard and longboard divisions on Saturday. Moore’s signature, front-hand gouge was on full display at Ala Moana Bowls as her sister cheered on the team from Magic Island.

Although Gov. Neil Abercrombie named surfing as an official school sport in 2011, the Hawai‘i High School Athletic Association has yet to implement a formal structure of events and competition format. Currently, OIA and ILH schools organize their surf teams as club sports and compete against each other under HSA. The Kamehameha Surf Team has been HSA State champions for the past five years.

With their five-year, undefeated record in Hawai‘i safely intact and new State Championship trophy up on Kapālama, the Kamehameha Surf Team is training for the National Scholastic of Surfing National Championships in June. They will be the only school from Hawai‘i competing at Dana Point, Calif., the site of NSSA Nationals, which is the most prestigious amateur surfing event in the U.S.