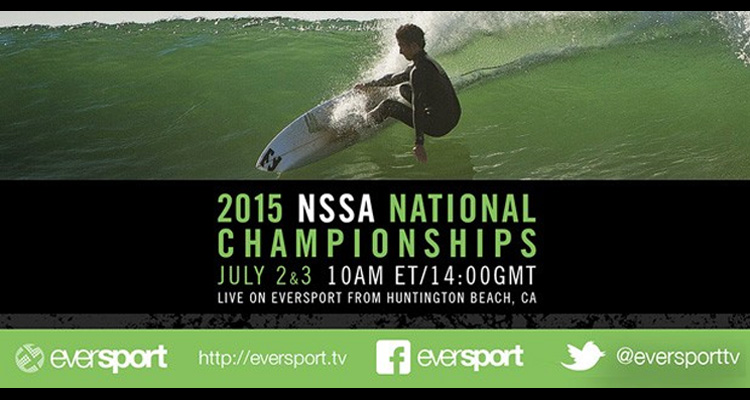 TUNE IN TO WATCH THE FINAL DAYS OF THE NSSA NATIONALS LIVE TOMORROW, JULY 2nd, AND FRIDAY, JULY 3rd AT SURFINGMAGAZINE.COM/NSSA

Huntington Beach, California (July 1, 2015): Tune in to watch a live webcast of the final two days of competition of the 2015 NSSA National Championships, presented by Body Glovetomorrow morning.

Thanks to sponsorship from Body Glove as well as Billabong, Volcom, Sikk Shades and SURFING Magazine, there will be over 22 hours of live action from the South Side of the Huntington Beach Pier for viewers around the globe. The webcast starts tomorrow and Friday morning at 6:50am PST, preceding the first heat in the water at 7am. Both days of coverage go until 6pm. The broadcast will also air live on Oceanic Time Warner Cable in Hawaii with some re-airs at later dates.

This year marks the 38th anniversary of the NSSA National Championships, considered the most prestigious amateur surfing event in the United States. Each year, more than 80 NSSA events are held regionally across the country and culminate in Huntington Beach. Many of the world’s most prominent surfers got their start climbing through the ranks of the NSSA including former NSSA National Open Champions: Kelly Slater, Rob Machado, Kalani Robb, Andy Irons, Bruce Irons, CJ Hobgood, Carissa Moore, Lakey Peterson, Nat Young, Kolohe Andino and 2014 Men’s Open Champion, Josh Moniz.

“Body Glove’s live webcast of the 2015 NSSA National Championships is a great way to support the NSSA and give viewers a chance to watch the action from wherever they are in the world,” said Body Glove VP of Marketing Scott Daley. “We’re stoked to support such an iconic and important event for the future of our sport, along with Billabong, Volcom, Sikk Shades and SURFING Magazine.”

The webcast will include coverage of the Open Men’s and Women’s divisions from Round Two through the Finals, as well as, Open Junior’s beginning with Round Three, Open Boys and Mini Groms beginning with the Quarters, and the Girls, Open Longboard and National Airshow Finals.

In addition to live action, scoring and results, hosts Ryan Simmons, Saxon Boucher and a roster of special guest hosts including NSSA Founder Peter “PT” Townend will provide behind-the-scenes commentary and insights. Catch all of the live action at http://www.surfingmagazine.com/nssa/.

The webcast will also be broadcast both live and delayed on Time Warner Cable on Channel 250 and 1250 HD in Hawaii (live), Channel 101 in Los Angeles (delay), Channel 111 in Desert Cities (delay), Channel 411 in San Diego (delay) and TWC SportsNet (delay), check local listings for more information. Get more info: http://www.surfingmagazine.com/nssa/

Founded in Redondo Beach, California in 1953 by twin brothers Bill and Bob Meistrell, Body Glove is the original wetsuit company. Today, the privately-owned, family-operated company is a leading global watersports brand that specializes in wetsuits, swimwear, clothing, footwear, accessories and technology products. While Body Glove has supported surfers and the surfing industry since 1953, today Body Glove sponsors one of the most respected surf and wakeboard teams in the industry. Pro surfers Tatiana Weston-Webb, Jamie O’Brien, Anthony Walsh, Alex Gray, Guinness World Record Holder Garrett McNamara, as well as wakeboarders Rusty Malinoski, Harley Clifford, and Bob Soven are all part of the Body Glove Team. Through Reef Check, SIMA’s environmental fund, and the Surfrider Foundation, Body Glove also works hard to preserve and protect the oceans and waterways it loves. The company’s headquarters are still based in Redondo Beach, but its products are sold all over the U.S. by a network of independent retailers, at its own Dive N’ Surf retail shop and in approximately 50 countries worldwide.#ALLTHINGSWATER

The National Scholastic Surfing Association (NSSA) is a nonprofit organization whose mission is to encourage and assist its members in their interest to learn and develop the fundamentals and skills of surfing competition while competing in structured and quality events. The NSSA promotes the qualities of discipline and competitive excellence while supporting the merits of academic achievement to young surfers. The NSSA strives to provide a fun surfing experience for all of its members. The NSSA is one of the few national youth sports organizations that require its participants to maintain academic standards in order to compete. Since 1978, the NSSA program philosophy has been that athletics and scholastics go hand in hand. More than 80 NSSA events are run nationwide that culminate with the annual National Championships which is regarded as the highest profile youth surfing event in America.