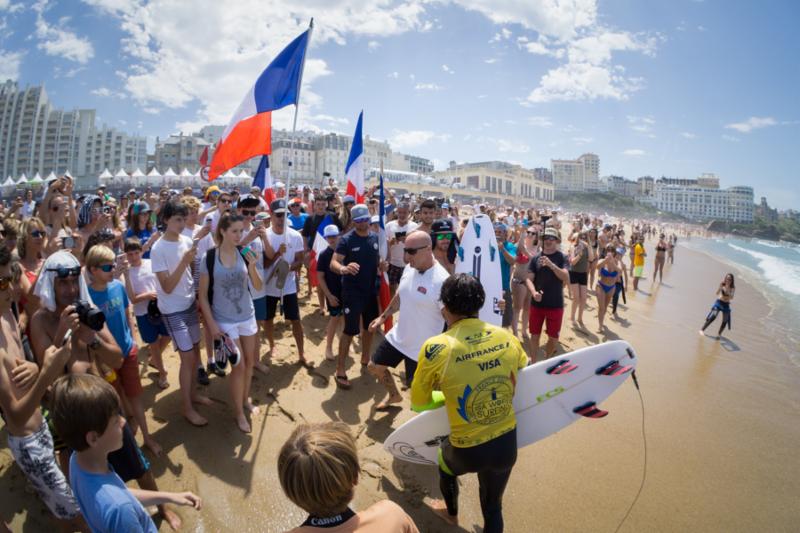 Jeremy Flores is received by his team and thousands of fans after his Round 2 heat win. Photo: ISA / Sean Evans
News
·3 min read

Biarritz, France, May 26, 2017 – Team France has continued their impressive performance at the ISA World Surfing Games and after six days of competition has held onto their lead that was built by the Women’s Gold and Silver Medal performances of Pauline Ado and Johanne Defay earlier this week. France is the last team with all male surfers remaining in the competition.
The men’s competition is set for an exciting showdown with a Quarterfinals on Saturday and with a finish on Sunday if the expected conditions holds true.
On the sixth day of competition at Grande Plage the international surfers were greeted by a new swell in the chest-high range, providing plenty of faces and ramps for the athletes to display their progressive surfing.
Super star heats were on tap for Friday afternoon with talented match ups such as Joan Duru(FRA) against Leon Glatzer (GER) and Jeremy Flores (FRA) against Raoni Monteiro (BRA).
Duru got the better of Glatzer in the first of the stacked heats, topping off his first-place score of 14.84 with a smooth air reverse.
When Monteiro and Flores took the water, Flores jumped out to an early lead with solid backhand Surfing causing the local crowd to erupt in cheers. Monteiro saved his best two waves for last, marking an 8.5 and a 6.33 to surpass Flores and take first place. Both surfers will advance through to Round 3.
Raoni Monteiro expressed his emotion post-heat:
“That heat felt like I was already in the final! Jeremy Flores is a great surfer, we’ve competed a ton of times on the WSL Championship Tour.
“I am so stoked that I was invited to compete for Team Brazil after an unfortunate last-minute injury to Wiggolly Dantas. My team supporting me on the beach helped a lot, they told me to go to the right side of the beach where I found my best waves.”
The host nation France nearly suffered their first elimination if not for the last-minute heroics of
Vincent Duvignac. Duvignac stood in third place as the final seconds of the heat were winding down, but he was able to find a wave with high scoring potential and marked the highest wave score of the heat with 8.7, moving him from third to first. Duvignac eliminated Germany’s
Lenni Jensen and helped keep France atop the team rankings.
In the final heat of Round 2, the reigning and two-time ISA World Champion Leandro Usuna(ARG) was defeated by South Africa’s Shane Sykes and Spain’s Luiz Diaz in a tightly contested heat. With Usuna bowing out of the competition, the lone remaining Gold Medalist left in the event home is the country hero, Jeremy Flores, who won the ISA World Surfing Games in Costa Rica in 2009.
Round 3 kicked off with the first five heats before the extreme high tide caused the contest to be put on hold.
Team Portugal stood out in the first heats of Round 3, as Pedro Henrique scored the round’s highest heat score thus far with 14.43, followed closely behind by his teammate, Guilherme Fonseca’s 14.00.
When Round 3 resumed in the afternoon Team France had another close call as Dimitri Ouvre tied with Chile’s Nicolas Vargas’ heat total of 8.87. Ouvre’s higher single wave score of 5.50 gave him the nod into second place and left Vargas in third, eliminating him from the competition.
As part of a strategy to bring the sport of Surfing to new audiences and enhance the coverage of the ISA World Surfing Games, the ISA recently formed a partnership with the Olympic Channel to live stream the ISA World Surfing Games and collaborate on content. The Olympic Channel will live stream the final two days of the contest on May 27 and 28 to their fans around the world. Watch on www.olympichchannel.com.
ISA President Fernando Aguerre, said:
“The world’s best National Surfing teams have shown their pride, perseverance and camaraderie all week. Now we have arrived at the final stretch where the ISA World Champions will distance themselves from the rest of the field and make history as the first ISA Gold Medalists crowned in Biarritz since 1980.
“Don’t miss this historic moment and tune in to the live webcast!”
The schedule for Saturday’s competition is as follows*:
8:30am – 10:30am: 8 heats Men Main Event Round 3
10:30am – 12:30pm: 8 heats Men Main Event Round 4
12:30pm – 1:50pm: 4 heats Men Quarterfinals
*Schedule subject to change.
The schedule for the remainder of the event is as follows:
May 27-28 – Men’s Competition, Grande Plage
May 28 – Closing Ceremony, Grande Plage
Watch the event live May 20-28 on www.isaworlds.com.