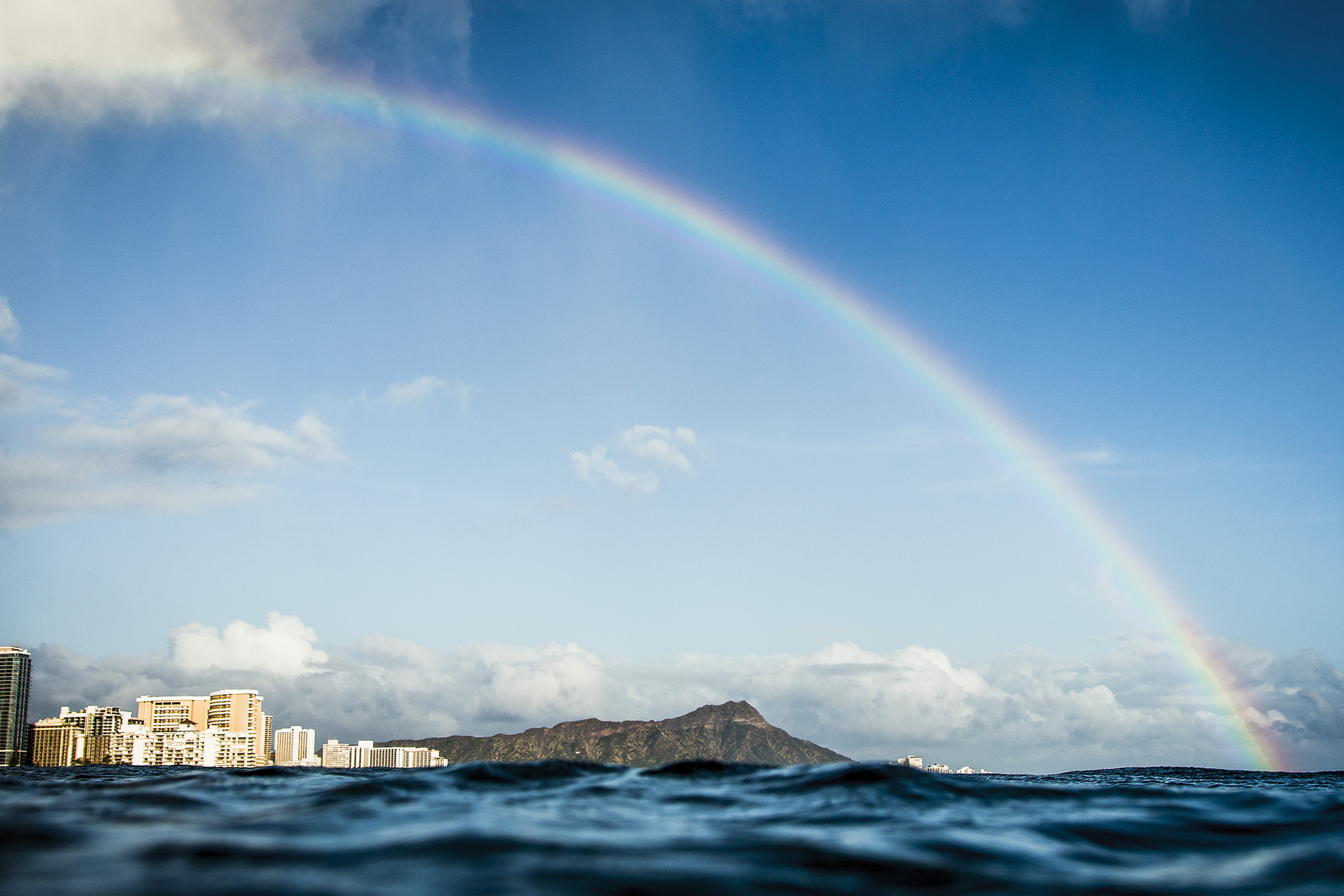 The Ins & Outs of Town

Summer on the South Shore is a place for the locals to revel in their own type of atmosphere compared to winter on the North Shore. The winter season swells take the majority of the hype when you mention surf and Hawaii. Of course, it’s considered the seven-mile miracle, which it is, but it only lasts for the better part of the year. When spring comes around, and the surf crowds and waves slowly dissipate from raw energy to playful lineups, the mind wanders to the South Shore swells and “if” the summer will be a long drag or one that’s memorable with good surf.

Growing up, I looked at summer as freedom from the school trap and the time of consistent waves. I was only around five foot tall, so any swell above a foot was good enough for me. I was dropped off at Waikiki beach around 8 am when my father went to work. He gave me $5 to survive eight-plus hours in the tourist-filled beaches and concrete jungle. As a country boy, city life felt exciting because there was always something to do. I had to figure out a strategy to make it through the day without succumbing to the fun agenda which prolonged summer in the worst way. I learned about places to eat, which waves to surf on all tides, and which direction they favored the most. Waikiki was my home base because that’s where the majority of other kids my age were. We would wreck havoc amongst hotels, tourist, and get away with as much free stuff from businesses around the area. It was my summer fun but became the basis of my surfing future whenever late May came around.

When the North Shore dwindles down, and the South Shore comes alive, Hawaii upholds its deal to provide an endless summer to surfers.

Trial and error proved to be the best approach to orient myself. You must unwind the labyrinth yourself to find the cheap places to eat and the areas with abundant parking. I seldom received good advice, and it often equated to that of the expensive tourist traps found on popular websites like Trip Advisor. But I’ll let you in on some so-called secrets, some you probably already know, and some might help you get through the four-month slump.

If surf is on your mind, you can start here. The first advice I can give you steers away from the obvious, which is swell. Of course, you need a swell to surf, but other factors come into play, and no matter what size swell is coming in, the tide will mainly dictate if you score or not. Just like any part of the world, three factors make a great session, especially in town- wind, waves, and tide. The first two seem somewhat a given being that if there is no swell, there are no waves. Wind doesn’t make a difference because the trades usually blow offshore all day unless the Kona winds decide to show up then your in to be creative own what part of the island you would need to go. Tide, on the other hand, plays a more significant role than you think. Low tide on the South Shore makes majority spots break but not to its full advantage. Spots like Ala Moana beach park work well on low tides, and some of the outer reef breaks don’t mind as much. Around mid tide, like most spots around Hawaii and the world, seems to light up and the best seems to be a low tide going high. The tide push is very critical to the South Shore as its pushes any swell, whether rising or falling, giving you a chance to get the best surf of the day. On the high tide, spots such as Waikiki, Diamond Head, and Kewalos tend to light up the crowded places but still work somewhat better than most other spots.

The worst traffic I have experienced is the afternoon traffic hours when detours in town tend to lead away from the waves and smack dab into the middle of Honolulu. Getting back to where you want to could cost you much-needed water time.

The swell direction has a minimal play on the reefs and the majority of the swell comes from the SW direction. When the straight south, south-west, or even southeasterly direction swells hit, most spots tend not to work as well. You need a good concoction of south and west to make most waves do its magic.

When you find out what swell is hitting the south shore and you have the tides in your favor, picking a spot tends to be less indecisive. But what if you can’t make up your mind about where to surf? How would you go about checking the places without losing much time in traffic? The way to do it is to pick a spot then head into it from either end of the spectrum, meaning if you want to surf Queens but want to see other spots as well, start at Kewalos or Diamond Head then work your way in. If you start at your selected spot, then figure it’s no good, you would be losing a lot of time hopping around heading east or west, going through traffic lights and detours. Start from one end then work your way through. There are a lot of one-way streets and especially detours during the morning and afternoon traffic hours. The worst I have experienced is the afternoon traffic hours when detours in town tend to lead away from the waves and smack dab into the middle of Honolulu. Getting back to where you want to could cost you much-needed water time. I learned to do things this way to sometimes allow for another after lunch session before I head back to the North Shore and beat rush hour traffic.

Police are bountiful in town; one second you think you have time to look at your phone and the next you’re pulling over because a cop just popped out of the side street you never saw.

If you don’t mind the traffic and luckily have the day off to explore multiple waves, hunger will set in at some point. One of the great things about town is the options of places to eat in such a short distance. My go-to spot has to be Shirokiya at Ala Moana Center. Its Japanese inspired cuisine with fair prices has never failed me, not to mention the all-day Happy Hour for a cold brew. It’s pretty much a no fail on the weekends. If Japanese isn’t your choice and you want a good ol kanak attack, Rainbow Drive In on Kapahulu is the spot. A local plate lunch menu with the best strawberry ice cream slushy to top it off, you can’t beat it. They have been serving the same plate lunch menu for years, and they taste just as good as they did the first time. If you’re craving some fresh fish mixed with some Hawaiian food options, Keeaumoku Seafood is a no-fail spot. What looks like a mom and pop store that is easy to miss, parking is scarce, and there is no room to dine in, this hole in the wall makes it well worth it after every bite. The fish is fresh from the auction daily and prepared with minimal ingredients, thinking about it is making my mouth water. If you get the chance, I would recommend the ahi belly plate, I swear you will be humbled. Google Maps will come in handy as this place is hard to find. Check your route direction first before heading into the town maze and get a good hold on where you have to go. Police are bountiful in town; one second you think you have time to look at your phone and the next you’re pulling over because a cop just popped out of the side street you never saw. It happened to me – I am about three tickets deep for doing just that.

Parking on the South Shore tends to be a game of finders keeper while dodging the high fees for “premium” spots. If you’re planning to surf Diamond Head, free parking is bountiful and the walk down to the water is littered with goat trails and a paved walkway. As you head into Waikiki, parking gets a little more complicated and somewhat pricey. You can head to either side of Waikiki to find parking. Starting at the Honolulu Zoo where parking is $1/ hour, this is as easy as you’ll get, but it tends to fill up fast post dawn patrol hours. For free parking in Waikiki, your best bet is to run the gauntlet of side streets towards the Ala Wai canal in hopes of finding street parking. This works best when people head off to work during the week around the mid-morning until the early afternoon, but you don’t expect this result on the weekends.

Towards Bowls area, parking is abundant, and the race for a spot is more of a challenge. Heading to Ala Moana Boat Harbor, go to the farthest parking lot near the ocean and head west. Here you’ll find a long stretch of parking but only as a first come, first serve basis. It’s more options than the tightly filled east end parking lot, and the showers are on the way out of the water to your car and the bathroom close by as well. Parking is free but pay attention to the signs where permit parking is needed and is intended for boat users.

Don’t be discouraged about the crowds as we all are part of it and with a solid plan to get to your surf break, finding a good parking spot, and good food to round off the day, South Shore is more doable than one would think.

Ala Moana Beach Park tends to have lots of street parking but also depends on the time of day. It also seems to be where the majority of dawn patrollers wet their gills before the days work because of the consistency of swell and the options of surf breaks available in a small area. For the most consistent parking, try Ala Moana Shopping Center as long as you don’t mind the less than a five-minute walk through the park. On the Ewa end, Kewalos has a small parking lot towards the basin but is consistently full; however, stalls tend to open up more rapidly than most other spots in the area. If it’s too packed at the Basin, you may find parking at the Point Panic side or Kakaako Park where there are a bunch of stalls with a short walk and paddle across the Kewalo channel to get to the surf.

South Shore or ”Town” has its own unique benefits if you’re planning on spending the summer on Oahu. Known as the “Gathering Isle” and especially in the heart of where surfing is taught to numerous tourists daily, things tend to get tough for a regular surf routine. Don’t be discouraged about the crowds as we all are part of it and with a solid plan to get to your surf break, finding a good parking spot, and good food to round off the day, South Shore is more doable than one would think. When the North Shore dwindles down, and the South Shore comes alive, Hawaii upholds its deal to provide an endless summer to surfers.