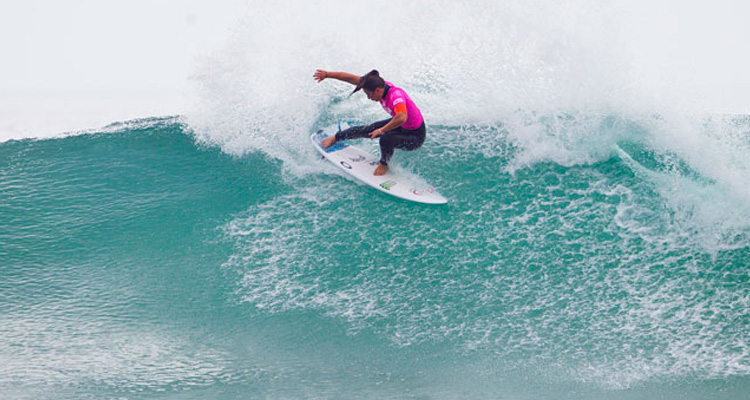 Tyler Wright (AUS) has claimed victory at the Roxy Pro France, besting Courtney Conlogue (USA) in a hard-fought Final as a packed crowd looked on at the primary site of Les Gardians.

Event No. 8 of 10 on the 2014 Samsung Galaxy ASP Women’s World Championship Tour, the Roxy Pro France enjoyed high-quality surf throughout the competition, suitably peaking today and providing the background for a major shakeup in the race for the ASP Women’s World Title.

Wright wasted little time in the Final, racking up a bevy of excellent scores for powerful and progressive surfing on the afternoon righthanders. Incorporating power turns, aerials and high-speed surfing, the young Australian collected the highest heat total of the event, an 18.53 out of a possible 20.

“The conditions were so fun out there and I just got into a great rhythm,” Wright said. “I think my first four waves were all over 9 points so I was really having fun. I’ve had a lot of success here in France over the years and I’m rapt to put another win on the board for this year.”

Today’s win vaults Wright from 4th to 2nd on the ASP Women’s World Championship Tour rankings and well within striking distance of a maiden world title heading into the final two events of the year.

“I feel like I’ve been surfing well all year but have had some tough luck in my heats,” Wright said. “That said, I’ve managed to fly a little bit under the radar and keep myself in the race. It’s so tight up there at the top of the ratings so it should be a great finish to the year.”

Conlogue was equally impressive on the final day of competition, besting Bianca Buitendag (ZAF) and Carissa Moore (HAW) en route to the Final. In only her second event back from an injury sustained earlier in the season, Conlogue reminded the world that she is a threat to the throne.

“Disappointed to be on the wrong end of that Final, but very happy with my result in France,” Conlogue said. “Trestles was disappointing so to come to France and get through a few heats and for my surfing to feel better is great for my confidence.”

Johanne Defay (FRA), 2014 ASP World Tour rookie, put on a sensational showing in front of her hometown crowd, blasting herself to the Semifinals where her run was halted by an in-form Tyler Wright (AUS). “Very happy with my performance in France but I would have liked to have made the Final,” Defay said. “I have so much support here from my family and friends and the crowd. It makes me feel very special and I hope I can continue to perform in Portugal.”

“Semifinals is a good finish, but I was hoping to gain more ground on Sally (Fitzgibbons) after she went down in the Quarterfinals,” Moore said. “Courtney (Conlogue) has been surfing so well all event though and I’m happy to see her back and doing well after her injury earlier in the year. It’s a very tight race at the top right now and it should make for an exciting finish to the season.”

Sally Fitzgibbons (AUS), current ASP World No. 1, was ousted from competition this morning by eventual champion Wright in their Quarterfinal match. Fitzgibbons retains the World No. 1 spot heading into Portugal.

The next stop on the 2014 Samsung Galaxy ASP Women’s World Championships will be the Casais Women’s Pro from October 1 – 7, 2014. Amidst the completion of today’s Roxy Pro France, the Quiksilver Pro France completed the remaining three heats of Round 2 as well as the opening four heats of Round 3 in clean three-to-five foot (1 – 1.5 metre) waves at Les Gardians.

Mick Fanning (AUS), reigning three-time ASP World Champion and current World No. 4, was in ferocious form as he dispatched of an on-fire rookie in Dion Atkinson (AUS) in Round 3. Atkinson surfed with renewed speed, power and progression but was unable to match the performance of the defending event winner.

“France is all about pacing,” Fanning said. “The conditions can change day to day and heat to heat. You have to be patient and observant and that’s the key. Dion (Atkinson) has been really sharp lately. We were trading pretty high scores out there and it always fires you up to see your opponent get a good one and to have an opportunity to do so as well.”

Fanning was joined by Kolohe Andino (USA), Matt Wilkinson (AUS) and John John Florence (HAW) in Round 3 victories this afternoon. When competition resumes, up first will be Josh Kerr (AUS) up against Adrian Buchan (AUS) in Heat 5 of Round 3.

Surfline, official forecasters for the Quiksilver and Roxy Pro France, are calling for: WNW swell continues on Sunday and into Monday before easing. New WNW swell due for Thursday with potential for solid, long period swell late next week.

Highlights from the Quiksilver and Roxy Pro France will be available at ASPWorldTour.com