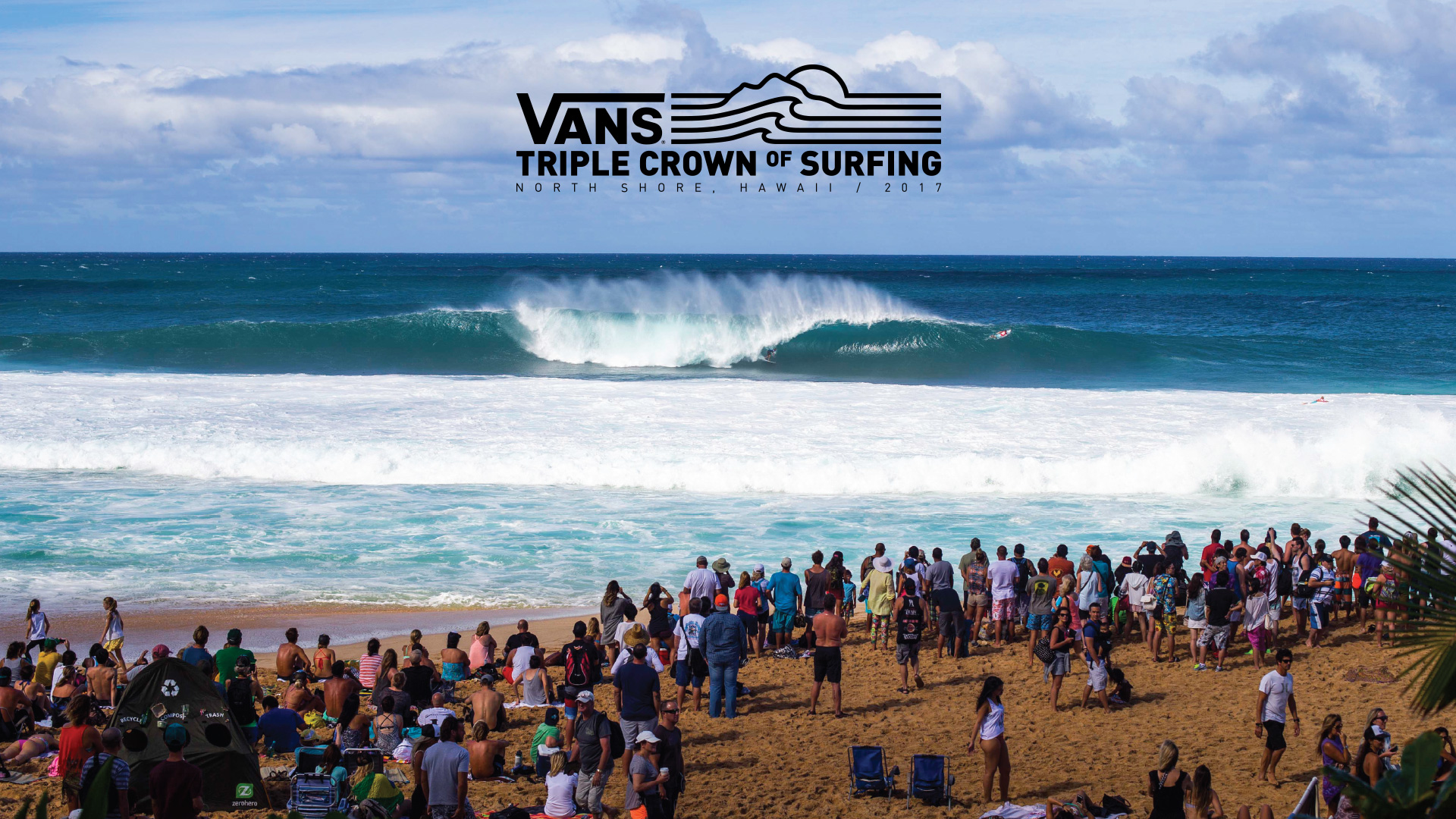 E komo mai (welcome) to Oahu’s North Shore. Please treat this extraordinary coastline with the admiration it deserves. It represents not only a fragile ecosystem, but also a gracious community that keeps surfing at the heart of its lifestyle. You can feel it at the farmer’s markets where dads tote future shredders on their shoulders, along the bike path that courses miles of famous sand, and in Haleiwa town where the first Vans Triple Crown of Surfing awards ceremony was held.

This year we pay tribute to 35 years of the Vans Triple Crown of Surfing, which has succeeded in bringing world-class competition and a community of creative people together to celebrate the lifestyle of surfing and honor its timeless heritage.

For over 60 years, Hawaii has been a breeding ground for professional surfing and continues to produce some of the best stories that authenticate its history and unique culture. The Vans Triple Crown has been an integral part of this story-telling and for more than half of the sport’s legacy, showcases the power and exclusivity of the North Shore.

The Vans Triple Crown of Surfing is a true original for a couple of monumental reasons:

#1 Hawaii is the birthplace of modern-day surfing. While surfing did not originate in Hawaii, the Hawaiians are credited for the revival of the sport in the early 20th century largely by Duke Kahanamoku, a.k.a the father of modern-day surfing, who shared the ancient Sport of Kings with the world. Hawaii is the most isolated archipelago in the world and only accounts for a fraction of Earth’s land mass, but it is the most significant place on the planet when it comes to surfing’s past, present and future.

Vans founder Paul Van Doren met Duke Kahanamoku in Huntington Beach during Surf City USA in 1964 and it was here that the first aloha-print Vans shoe was conceived. Van Doren told Duke he wanted to customize a pair of shoes that he could take home to Hawaii, and when asked to pick out a design, the Hawaiian pointed to surf pioneer Fred Hemmings who was donning a red and white aloha shirt. The story goes that Van Doren took the shirt right off Fred’s back and brought it to the factory where the very first aloha-print Vans shoes were personalized.
This custom shoe has become an annual tradition that Paul’s son Steve, Vans Vice President, perpetuates, where he gifts a limited batch of Hawaiian-inspired Vans to commemorate each year of the Vans Triple Crown.

#2 North Shore is the proving grounds for professional surfing. For decades, surfers have journeyed to the North Shore for a chance to sample the waves that have made this seven-mile stretch of shoreline so famous, including Haleiwa, Sunset and Pipeline. Surfers’ merit has always been sized against these breaks, since the trio represent a diverse scale for testing progressiveness, grit and true talent. Match this with crowning World Champions through the Vans Triple Crown and you have ground zero for professional surfing.

Vans has always considered the North Shore a second home, and each year the team returns to pay homage to the locale that has helped shape a global lifestyle. The Van Dorens interact through one-to-one connections (Steve flips burgers along the bike path at the Vans World Cup!), community events and total support, all for the love of perpetuating family, relationships and authenticity. Paul Van Doren himself always said, “I am in the people business, not the shoe business.”

Even after 35 years, the Vans Triple Crown remains unparalleled in their community integration and lifestyle perpetuation, which has been inspired by the North Shore, its residents and the culture that we are all so lucky to live.