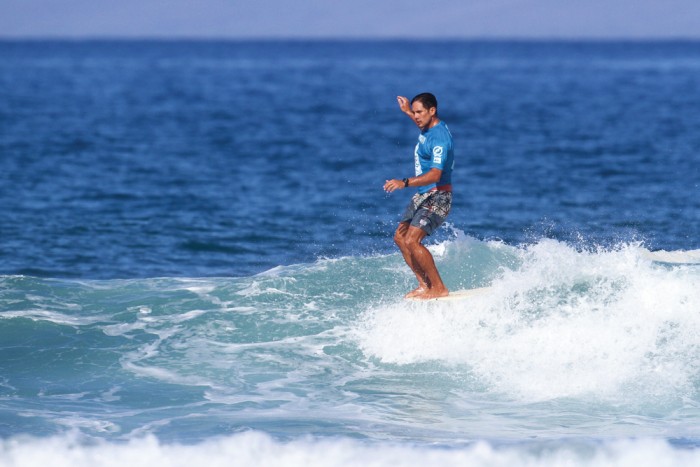 Kekaula Campbell was a repeat triple winner and claimed his seventh Men’s Open title at the 22nd annual Ole Longboard Classic, Saturday, August 29 at Launiupoko Park. Waves ranged from chest-high to over-head with glassy conditions for the 196 entries. Campbell, a 37-year-old Kamehameha Middle School counselor, won the Men’s Open, Ole Board division, and his 30-39 age group for the second straight year.

The Men’s Open Final was so close that the three judges each selected a different winner. Two former two-time champions, Mau Ah Hee and Eric Casco, each had first place votes. One judge had the top five separated by only nine-tenths of a point.

Campbell got the final started with a solid hang ten across the Lahaina peak. Two judges gave him an 8.5. Matt Pasamonte caught the next wave and hung ten twice and then finished by hanging his heels over the nose. One judge gave him a perfect 10. “I saw him when I was paddling back out,” Campbell said of Pasamonte’s first wave. “I saw that he was getting real busy.”

Pasamonte could never get a solid back-up ride for his second scoring wave. Campbell, meanwhile had two more scores in the 8 plus range with stylish drop- knee cutbacks and hanging ten toes over the edge. “I knew it was close,” Campbell said. “Everybody was surfing so good. The waves were nice and consistent. I felt like anybody could have won that.”

For the second straight year, Ah Hee was a triple runner-up, finishing behind Campbell in the Open and Ole divisions, and behind Kely Rodrigues in the 19-29 age group. “I just want to yell,” Ah Hee said laughing. “I really wanted it. There were waves this year. Everybody was just killing it.”