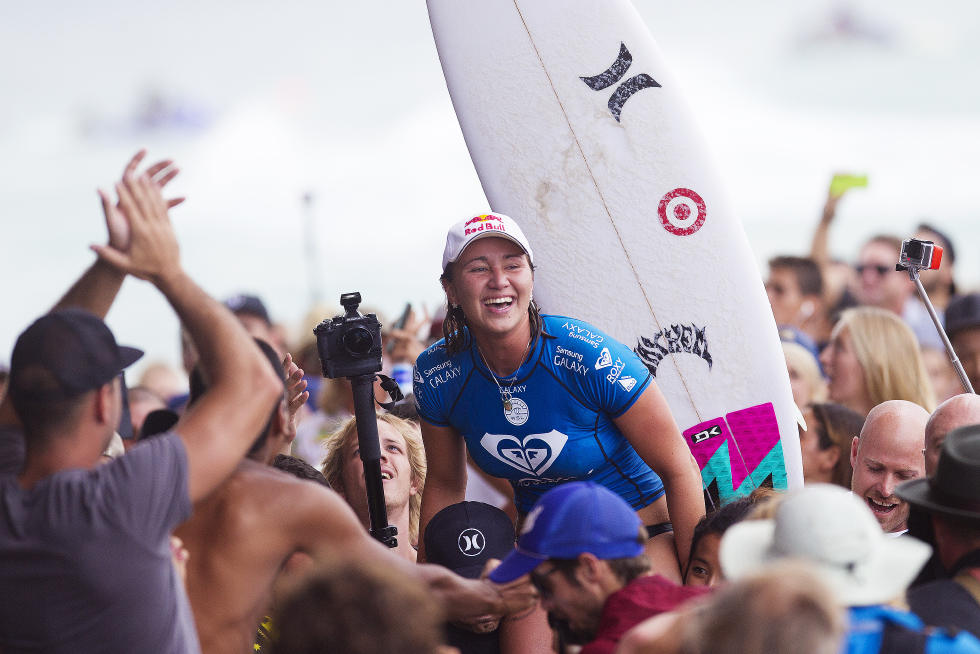 Filipe Toledo (BRA), the most in-form surfer of the event, claimed his first CT win today at the Quiksilver Pro. The youngest surfer on Tour put on an unbelievable performance throughout the competition and delivered the highest heat total of the event in the Final today, a near-perfect 19.60. Entering his third year on tour, Toledo consistently delivered mind-blowing turns and blistering aerial maneuvers to become the second Brazilian to win the event.

Toledo faced Julian Wilson (AUS) in the Final and the new-school match-up between two of the most progressive surfers on Tour did not disappoint. Toledo exploded out of the gates, posting an 8 and a 9 before his opponent had taken a wave and Wilson waited nearly half the heat before taking a his first ride. An incredible heat played out, with both surfers posting nine-point plus rides. A dynamic Toledo put everything into his turns and his air game was second-to-none, landing maneuver after maneuver. The young Brazilian took things to the next level, putting on an amazing display for a second 9-point ride and an 18.77 two-wave total. Toledo took a final wave under Wilson’s priority with one minute remaining to cement his win and bring the cheering crowd to their feet. His fast, radical surfing, earned him a Perfect 10 to seal the deal on his first Final and his first CT win. Toledo previously dispatched Adriano de Souza (BRA) and Bede Durbidge (AUS) on his way to the Final today.

The Roxy Pro Final saw Carissa Moore (HAW) battle Stephanie Gilmore (AUS). Moore looked composed and stylish, claiming a win at the first event of the season, taking the yellow jersey from her opponent and defeating the reigning six-time WSL Champion on her home turf. Moore didn’t drop a heat in the competition, winning through each Round on her way to the Final. Today was the 20th CT match-up for the pair and Moore’s win evens the score with 10 victories apiece. The win today is Moore’s 14th on the CT and her second victory on the Gold Coast, having previously won the event in 2011 on the way to her first World Title.

Gilmore got to work early in the Final, maintaining her down-the-line flow for a solid opening score, an 8.33, but it was Moore’s day. The Hawaiian answered back with an unbelievable display, looking perfectly in sync with the wave to take an excellent 9.40. Moore was patient, holding priority and waiting until there were just seven minutes remaining to take her next ride. Moore put together a well-constructed wave earning another nine-point ride for a variety of powerful maneuvers, including a smooth roundhouse cutback, to leave Gilmore in a combination situation that she couldn’t escape. Moore put on a display of crowd-pleasing moves at the end of the heat in celebration of her victory, boasting an 18.44 heat total, the highest of the Roxy Pro.

The highest ranked surfer going into today’s Quiksilver Pro Semifinals, Adriano de Souza (BRA) wasn’t able to contain the energy of his younger opponent. Toledo found the wave of the heat for an excellent 9.40, securing his place in the Final. De Souza looked frustrated and deflated as he struggled to escape the combination situation and takes home a 3rd-place finish, equaling his best result at Snapper Rocks.