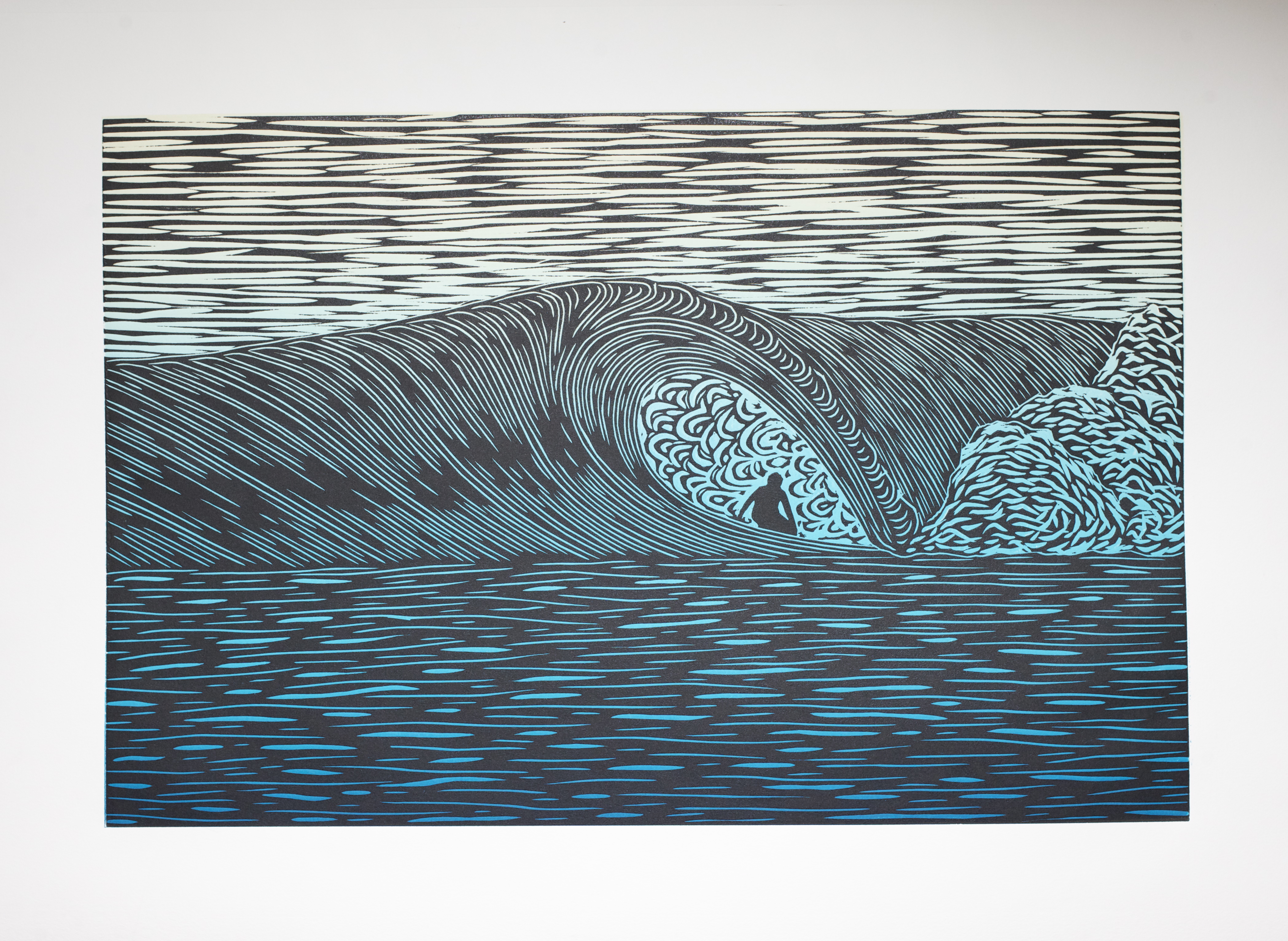 The sound of the press betrays its weight as Steve Kean slowly pulls another print from his latest plate. “Each one is just slightly unique,” Says Kean, A Pennsylvania native who first came to the islands in 2008. “Every roll ages the block, the ink distributes differently, maybe it slips a little. I like that though – art is imperfection and mystery.” This is woodcut, a form of printmaking in which the artist carves his image into a wooden block. Ink is then applied to the surface and paper pressed onto it to receive the ink. “It’s interesting because what I’m carving is actually the negative space,” Reflects Kean in the still studio air, hushed between presses. “Every mark made has a definite impact on what I’m creating, but the final image is largely defined by what I don’t carve.” He uses MDF – a soft composite wood, which means that after a certain number of prints it becomes too worn and flattened to use anymore. “Every block I carve has a very limited lifespan. It forces you to let go and move on to the next one.” Kean began surfing the beach breaks of New Jersey at an early age, and his relationship with the ocean inevitably laid down permanent roots in his developing creativity. “I went on to study art and art education at Temple University in Philadelphia. I explored a lot of material, but would always come back to surf art. The ocean, the waves, the light – they’re all beautiful and inspiring, sure. But it’s more than that I think. The ocean is primordial. Riding a wave is this weird and wonderful symbiosis. I’m always trying to convey what it’s like to be with the ocean that way. And not just convey it but process it, too. It’s such a powerful experience that we’ll always be trying to process it, I think. That’s partly why I took to the printmaking so strongly.” Kean has experimented with a variety of media over the years, including a unique type of woodburning as well as more traditional acrylic on canvas. “I recently came back to printmaking, and woodcut just made instant sense to me. I found the rhythm of gouging the wood meditative, and the impermanence of each block a kind of metaphor. Yes you get several prints, but they’re finite and individual, and there’s no indelible original. It’s a very process orientated discipline.” Kean admits, though, that the moment of pulling the finished piece off the plate is special, too. “It’s the gratification, the reveal. And there’s something about this style of printmaking. I guess there’s a kind of edginess to it, almost a street art feel.” Kean’s work has been displayed at The Honolulu Printmaker’s Annual Exhibition and The Honolulu Museum of Art School, as well as the Friends of Sunset Charity Auction. He also teaches art part time: to fourth graders at Mililani Mauka Elementary, and at Waialua Elementary through the Museum’s Art To Go outreach program. “It’s awesome getting kids stoked on art and sharing my passion with them. There’s a certain energy in the art room that I thrive on.”

Steve Kean lives and works on The North Shore of O’ahu. His latest collection, Surface Interface, is on display at the Beet Box Café, Haleiwa, through the end of the winter season.